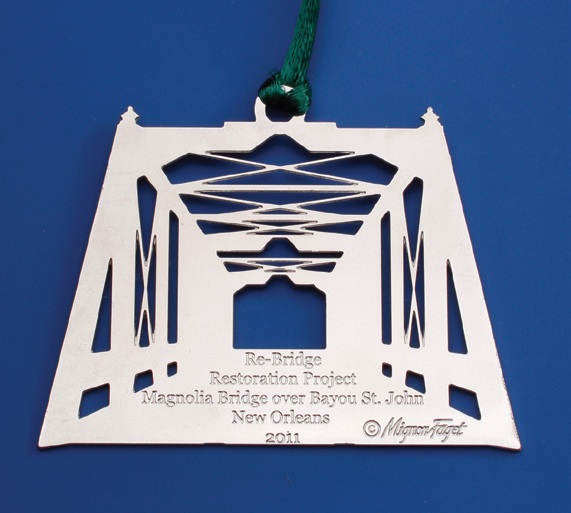 Mignon Faget and Re-Bridge have teamed up to raise matching funds to rehabilitate the Magnolia and Dumaine Street Bridges.

The Faubourg St. John Neighborhood Association has grave concerns about the structural integrity of the Magnolia (Cabrini) and the Dumaine Street Bridges that span Bayou St. John.

The Magnolia Bridge is an historic treasure and was recently named to the Louisiana Landmark Society’s coveted “New Orleans Nine” list. We believe it may be the oldest existing bridge in New Orleans, built in the late 1800s when Faubourg St. John was a thriving commercial
corridor. Today age and weather have taken a toll. The Magnolia Bridge suffers from significant deterioration in its under-girding that poses a potential safety threat.

The Dumaine Street Bridge was built in 1951 and needs concrete repair and beautification. In 2010 the Faubourg St. John Neighborhood Association established a committee to consider options for repairing and restoring these bridges; this committee later launched the Re-Bridge project.

Re-Bridge is now leading a collaborative effort that has garnered extensive public, private, and community support to address the structural and cosmetic deficiencies of the Magnolia and Dumaine Bridges. Although we love these historically significant bridges, we can’t put them in a museum. They to be strong, so that they may serve the community as originally conceived—as a solid path for everyone to walk. Re-Bridge’s mission is to support our bridges, so the bridges can continue supporting us.

In that spirit, Mignon Faget, a reknown jewelry designer based in her native New Orleans, Louisiana, has extended a generous offer of help. Faget’s family settled in the city in the 18th century, and she grew up along the banks of Bayou St. John.

Her jewelry, worked in gold, silver, precious, and semi-precious stones, often finds inspiration in New Orleans architecture and culture or forms in nature. Following Hurricane Katrina, Mignon Faget’s uptown gallery was one of the first businesses to re-open. She donated and continues to donate proceeds from the sale of her Gulf Coast designs to Coalition to Restore Coastal Louisiana.

Now, Mignon Faget has teamed up with Re-Bridge to help raise matching funds to rehabilitate these historic bridges that are so appreciated by neighbors, visitors, runners, cyclists and Jazz Festers from all over New Orleans and the world.

Mignon Faget is generously donating proceeds from the sale of her Magnolia Bridge AdornAment, which is available for purchase through rebridge.org or http://www.mignonfaget.com/shop/product/holiday/3238M.html.
For more information during business hours, call Rachel Dangermond, Chair of Re-Bridge at 504.309.2116 or visit mignonfaget.com. 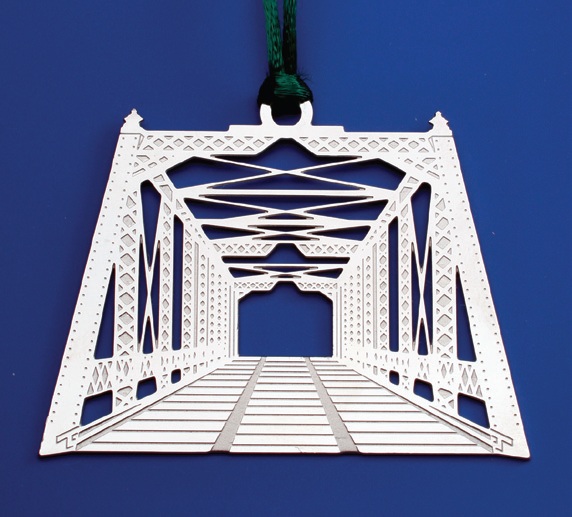