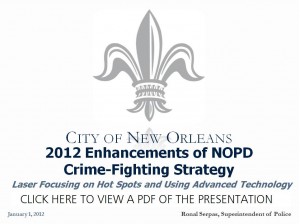 “The new police tactics we announce today, coupled with Mayor Landrieu’s Strategic Command to Reduce Homicides, give us new tools that we need to make a difference in New Orleans,” said Superintendent Serpas.

The biggest advantage to this new strategy is the department’s ability to focus and zero-in on locations where crime trends are most prevalent, as opposed to covering broader crime areas. New software acquired last year, which is now in place, enables the NOPD to do this.

“The 2012 refinements released today, expand upon the strength of the NOPD 65 Point Plan to re-build the New Orleans Police department by being able to utilize several state-of-the-art crime analytic software programs purchased and installed throughout 2011″, said Superintendent Serpas.

“What is noteworthy about this plan is that we now have the unparalleled ability to use laser-like focus to fight both major and minor crimes within our community. Instead of using manpower to cover the large area of , say, a half mile, we now have the computer intelligence and knowledge to focus at the street level, many times no bigger than four to five square blocks”, Serpas said.

As the technology becomes more familiar with all districts, the department will better understand crime trends and criminal habits, and information will be reviewed and updated to fine-tune policing strategies.

Superintendent Serpas said, “We will routinely produce maps that direct our aggressive, professional and impartial policing in the areas of our city linked by homicides, shootings, guns and drugs in ways that are supported by best practices and evidenced based policing of hot spots models used in other cities.”

“Key to the future of this department is building the professionalism of the men and women who serve with pride and dignity”, Superintendent Serpas said.

“Due to the Mayor’s and City Council’s action on the NOPD’s 2012 budget, which provides stability for planning, we look forward to reviving the Police Officer II, III and IV promotional system in a unique partnership with the Fraternal Order of Police in 2012; promoting critically needed sergeants and lieutenants to ensure that our service is the finest it can be; and, by hiring the first NOPD Training Academy of our administration in early 2012.”
# # #

NEW ORLEANS – The NOPD has a new crime fighting strategy for 2012. The department says its creating special patrol sectors; keeping officers in the same neighborhoods; and utilizing state-of-the-art crime analyzing software to zero-in on locations prone to crime.

“All the information, software management tools we needed to be smarter, more accurate, laser-like focus on several block streets as opposed to several 100 block wide. We’ll be on those spots every day, all day and I think it’s going to make a difference,” said NOPD Superintendent Ronal Serpas during a news conference on Friday.

“As a whole family all of New Orleans is worse off right now,” said Buckner who runs a backyard operation from his 7th ward home. It’s a place where kids can sew “Mardi Gras Indian costumes” and have a safe place to go.

Buckner’s main goal is to keep younger generations engaged, out of harms way and off the street.

“We’re using the beading technique and beading work as a tool of discipline and a place for children to come and create and discover themselves with their art,” said Buckner.

The New Orleans native believes to stop crime, kids need more extracurricular activities and if they break the law, they need to serve the time.

“The laws should state if you get caught with a gun for no reason at all, you have no paperwork on the gun, you should do at least two years,” said Buckner.

As 2012 gets underway, Buckner, like Chief Serpas, can only hope for a more peaceful new year.

“I do think and I feel very good that 2012 is going to be a better year,” said Serpas as a news conference last Friday.

Other changes coming to NOPD this year include the revival of its officer promotion system and the hiring of 30 new officers for a new Police Academy.