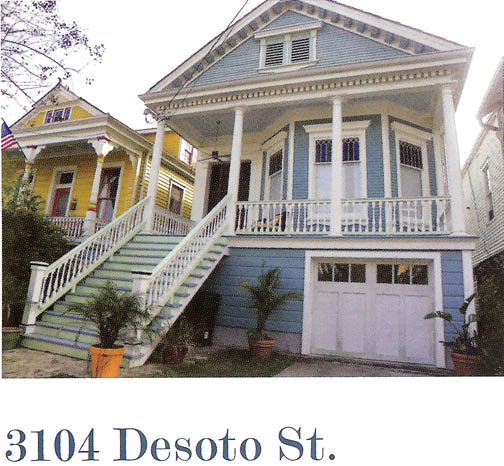 THIS NEO-CLASSICAL HOUSE is decorated with a balustrade, modillions and white Doric columns that contrast with stained-glass transoms and brilliant blue walls. The property shares some early history with 3100 Desoto Street , also featured on the tour, and was once owned by the Queyrouze family, which included champion fencer, Maxim, and famed Creole essayist, Leona, whose compositions were performed at the 1884 World Cotton Centennial Exposition. Current owners Kenneth and Aimee Gowland purchased the home in June of 2005 and completed their extensive renovations in 2009.

Multiple past renovations had altered the floorplan drastically, including the addition of a side gallery that was later insulated. Today, the only room reminiscent of the original floorplan is the children’s bedroom.

The living and dining rooms have a minimal, modernist aesthetic enlivened by original plaster ceiling medallions and arches. A massive portionof bargeboard that was salvaged during renovation decorates the main wall of the living room. In the modernized kitchen, original hardwood floors were found under several layers of linoleum and vinyl.

The Gowland’s renovation incorporated some major structural work, including the replacement of the original brick foundation, and provided an opportunity to raise the height of the basement ceiling by approximately one foot, allowing the family of four to create two additional bedrooms and a bathroom. 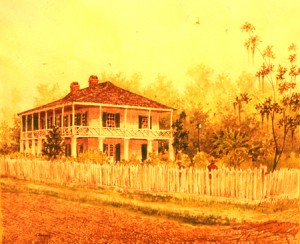