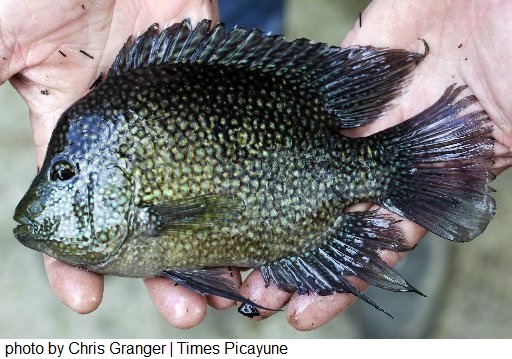 The Rio Grande cichlid was once found only in waterways in northern Mexico and southern Texas. Popular among aquarium hobbyists thanks to its iridescent blue and green markings, adult cichlids typically grow 6 or 8 inches long but can reach a foot.

Also known as Rio Grande perch, the first cichlids were spotted in Bayou St. John a little over a decade ago, most likely after owners emptied their fish tanks into Lake Pontchartrain.

“Cichlids are very mean and territorial,” he said. “They outcompete other fish of a similar size in every way, from eating their food to finding the best places to hide from predatory birds to taking over the best breeding spots. They also eat other fishes’ eggs as well as other fish — we sometimes find fish scales in their stomachs.”

Cichlids have already eliminated several small fish species from parts of the bayou, including least killifish and sheepshead minnows, according to Lorenz. The pests probably would have overwhelmed several midsized species as well if the Louisiana Department of Wildlife and Fisheries didn’t routinely restock them.

The cichlid population in New Orleans skyrocketed after flooding in the wake of Hurricane Katrina, which spread the fish to lakes and ponds in City Park and the canal system. Lorenz estimates that there are now “tens of millions, or even billions,” in New Orleans.

Bayou St. John resident Joe Adams, who has fished in the bayou since 2001, has seen the fish’s aggressiveness and proliferation firsthand. “You can tell when you’ve got one, because they fight like the dickens,” Adams said. On a typical outing, Adams said he catches about a dozen fish, half of which are cichlids.

“They will eat just about anything,” he said. “I know one guy who catches them with French fries on a handline (a hook on a single fishing line). I’ve caught them with pieces of a hot dog and pieces of canned corn.”

Although Adams doesn’t eat fish, plenty of other people relish the cichlids. “They’re the same family as tilapia,” he pointed out. “I’ve fried them up in a pan for friends, and they just assumed it was speckled trout. They said it was delicious.”

The cichlid population in New Orleans dropped a bit the last two years following back-to-back cold winters, Lorenz said. But with this year’s mild weather, he expects the population to soar.

In recent months, Patrick Smith, a colleague at UNO who tests Bayou St. John monthly, has observed more cichlids breeding and more nests and eggs than ever.

Although there’s no chance of eradicating the Rio Grande cichlid from New Orleans’ waters, the most feasible way to keep its population in check is to stock the bayou and City Park’s lakes and ponds with rivals, Lorenz said. Possibilities include green sunfish, warmouth and gar.

Another tactic — encouraging people to fish for the pests — probably doesn’t have a huge impact, but every little bit helps.

For his part, since learning recently that cichlids threaten other bayou species, Adams has switched from throwing his catch back to tossing it in his freezer.

“My wife breeds box turtles,” he says. “Every few days, I take a couple cichlids out and chop them into pieces, and she feeds them to the turtles. I figure it’s my duty to catch as many as I can.”
••••••••
Click here to view the original article as it appeared in the Times Picayune.