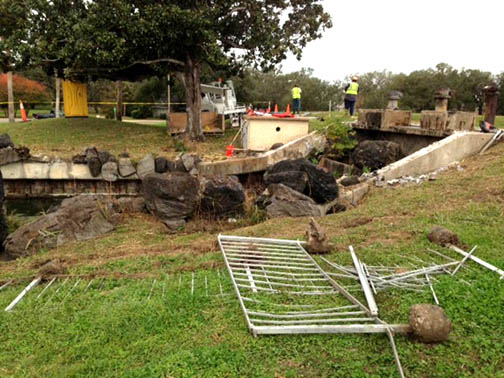 After years of effort on the part of many members of our community, the outdated Bayou St. John water control structure, or as some have called it the “waterfall dam”, at Robert E. Lee and the bayou, is being demolished.

The move to demolish the structure coalesced in December 2008 as neighborhood leaders called on the Coastal Protection and Restoration Authority, the Southeast Louisiana Flood Protection Authority East, and the U.S. Army Corps of Engineers to work with the Orleans Levee District to provide a sector gate in good working order and to remove the dam.

Please join Councilmember Susan Guidry and other concerned residents for an opportunity to celebrate the results of the hard work and persistence of everyone who has worked to have the dam removed. We will be gathering at the site on Robert E. Lee and the bayou on Monday, December 10, at 9 a.m. to cheer the demolition and take some celebratory photos! 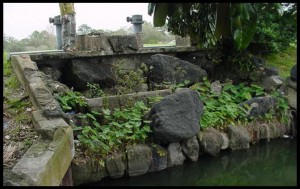 Currently, the unanticipated Scenic Rivers permit process is being worked.

The $234,000 project will be executed by the Orleans Levee District, and is partially funded by the Gulf of Mexico Sea Grant program. The funding came from NOAA hydro-restoration grants.

The project is currently estimated to be completed by January, 2013.

Objectives:
1 – To attain permits for removal of old flood control structure.
2 – To remove old flood control structure hindering water flow into Bayou St. John.
3 – To schedule and implement openings of the new flood gate at Lake Pontchartrain.
4 – To monitor the increased recruitment of larval and juvenile estuarine fish, crabs and mussels.
5 – To monitor the improved water quality in Bayou St. John and City Park lagoons and waterways.
6 – To increase use of the Bayou by recreational groups.

Methodology:
The Orleans Levee District (OLD) has authority over the flood control structures located in Bayou St. John, New Orleans, Louisiana. One of the structures, built in 1962, is outdated and has been replaced by a more modern flood gate. The OLD plans to remove the old flood control structure located at Robert E. Lee Blvd and Bayou St. John. Burt-Kleinpeter, Inc. researched the hydrology of the area and has made recommendations on removing the structure. Permits will be attained from the Corps of Engineers, the Louisiana Department of Wildlife and Fisheries, and the Louisiana Department of Natural Resources. The RFP will be advertised and awarded to a contractor. The contractor will remove the old flood control structure. Monitoring of the Bayou will continue by the Louisiana Department of Wildlife and Fisheries and other organizations.

Rationale:
Bayou St. John was once a natural tributary of Lake Pontchartrain, navigable from the Lake into the heart of the city of New Orleans. It was used as the main transportation waterway of goods into the city. Currently, the two flood control structures on the bayou inhibit both navigation and the natural water flow. The older structure, built in 1962, is composed of a cement bulkhead that incorporates a drain and butterfly valves to allow some water flow. The butterfly valves, meant to remain open, are mostly non-functional, with one valve open and others closed or mostly closed. The new flood gates, meant to replace the older structure, are located approximately 0.25 miles toward the lake from the old structure; these gates have opening and closing capability, which the operation of could increase water and fish access into the bayou. It also has navigation gates that can be opened when water levels allow, but are not presently used.
The new flood gate provides flood protection to the city of New Orleans. The old control structure only inhibits the exchange of biota and water from the lake.

Bayou St. John - In an effort to improve water flow and recreational fisheries along Bayou St. John, the Gulf of Mexico (GOM) Sea Grant programs through a partnership with the National Oceanic and Atmospheric Administration (NOAA) Restoration Center are funding the removal of a non-functional water control structure on the bayou. The $234,000 project will be executed by the Orleans Levee District (OLD), and the NOAA Restoration Center/GOM Sea Grant partnership is contributing $95,000 toward the cost.

A recent study concluded the old water control structure is unnecessary. The cement structure, built in 1962, was originally designed with open butterfly valves to control water flow from Lake Pontchartrain. But years of valve maintenance problems rendered the control structure superfluous. In 1992, additional floodgates were built to replace the old structure.

“Because the new, much higher sector gate structure is the primary protection for storm surge entering the bayou, the original purpose of the 1962 structure to protect against storm surge is no longer necessary,” said Gerard Gillen, OLD executive director.

The primary benefit of removing the old control structure will be to restore historic hydrologic flow into the bayou, allowing for the re-establishment of Bayou St. John’s aquatic vegetation and the growth of native marine life. Officials also hope that the revitalized bayou will attract more recreational activity along the City Park lagoons that feed off the bayou.

“This is an excellent opportunity to improve access to Bayou St. John for fish and for the human residents of the surrounding communities,” said Mel Landry, a NOAA marine habitat resource specialist located in Baton Rouge.

Article in the Times Picayune:
http://www.nola.com/environment/index.ssf/2012/04/meeting_this_afternoon_on_remo.html