An additional parking option for Saturday’s 100th Louisiana Derby & Infield Festival at Fair Grounds Race Course & Slots has been confirmed at 1913 Gentilly Boulevard – the corner of Gentilly and Trafalgar Street – just two blocks north of the racetrack. The owner of the property informed Fair Grounds that spots will cost $10 per vehicle.

Earlier this week Fair Grounds announced off-site parking at the former John F. Kennedy High School at Wisner Avenue and Robert E. Lee Boulevard, across from City Park. Parking at that lot will be free and roundtrip shuttle service will be $5 per person. The shuttle will run from Noon (one hour before the day’s first race) until 9 p.m. (after the Cowboy Mouth concert).

Participating food trucks and vendors will prepare an original recipe incorporating Jägermeister. The resulting creations will be for sale along with the outfit’s standard fare to guests 21 and up.

Infield Festival fans are encouraged to share their thoughts on the Jägermeister food items via Fair Grounds’ Facebook (facebook.com/FairGroundsRaceCourseandSlots), Twitter (@FairGroundaNOLA) or Instagram (@FairGroundsNOLA). Social media feedback will be taken into consideration during judging.

Food will be judged by a team of Infield Festival officials on appearance, creativity, taste and use of Jägermeister. The top three will be announced during the day and the winner will be chosen following a second tasting prior to the Cowboy Mouth concert on the Jägermeister Stage.

The winning prize package includes a Jägermeister guitar, Jägermeister tap machine and Jägermeister chef’s coat, along with the honor of having the winning dish prepared and served at the Jägermeister VIP event during the annual “Tales of the Cocktail” spirits industry gathering in July. The winning recipe and winner’s bio will appear on Jäger.com.

HAT CONTEST MOVES TO INSTAGRAM FOR FIRST TIME – The annual Louisiana Derby Day Hat Contest will be held online for the first time in 2013 so fans can enter from anywhere, whether they are enjoying the day in the Infield, the Grandstand or the Clubhouse.

To enter, contestants simply post a photo of themselves in their funkiest, craziest or most stylish hat on Instagram along with the hashtag #LAderby (note your profile must be public for your photo to be seen by the judges). Contestants are also asked to follow and tag Fair Grounds on Instagram, @FairGroundsNOLA.

The winner will receive lunch for four in the Fair Grounds Clubhouse dining room on any live racing day next meet (except Opening Day, graded stakes days and Starlight Racing nights). The 142nd Thoroughbred Racing Season at Fair Grounds opens in November and will run through March 2014.

The contest winner will be announced March 31, the day after the Louisiana Derby, via the Fair Grounds Instagram account. The winner is asked to contact Fair Grounds to collect their prize via Facebook (facebook.com/FairGroundsRaceCourseandSlots).

The Louisiana Derby is a $1 million event for 3-year-old horses attempting to earn their way into the world’s most famous horse race, the Kentucky Derby, held five weeks later at Churchill Downs in Louisville, Ky. The richest and most prestigious Thoroughbred race in the Deep South, the Louisiana Derby will celebrate its milestone 100th running this year.

In celebration of the 100th running of the Louisiana Derby, Fair Grounds is staging the first-ever Louisiana Derby Infield Festival. The festival features concerts by Cowboy Mouth and Flow Tribe and a gathering of the city’s top food trucks and pop-up vendors. Tickets are $25 and can be purchased at FGNO.com/tickets. 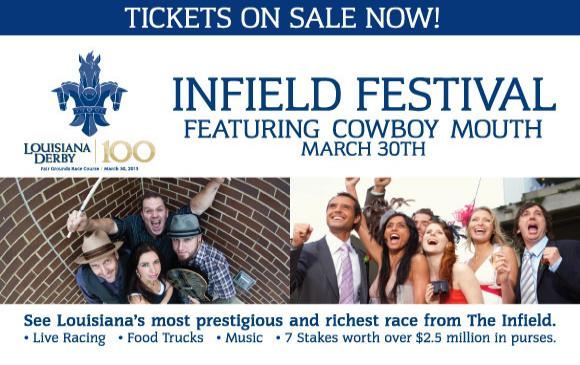