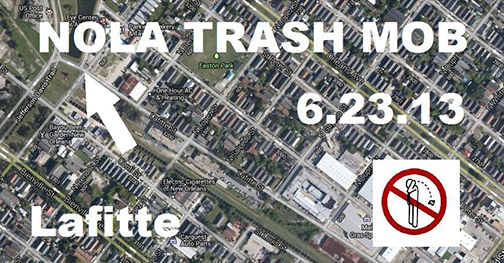 We will meet at 8:30am at Hagan & Lafitte toward Broad (near Jeff Davis) and mob our way down Lafitte St. If you arrive anytime after 8:30, just look for us along Lafitte St. We’re hoping the earlier start time will help us beat at least some of the heat. Please help us continue our assault on litter as we take back the streets from the trash!

Participants are encouraged to bring their own gloves and garbage bags, but we will try to bring a limited supply of extras. The trash mob will last for about 1 to 1.5 hours, but people can participate however long they would like.

=====
For those that are new to NOLA Trash Mob, we are a group of volunteers who want to change the way New Orleans thinks about litter, primarily through clean-ups or “trash mobs”. For these trash mobs, we select a public space, usually a particular city block or area that has a significant amount of litter, and we set a time and day to go and pick up trash there. They usually are scheduled about once a week on Sunday mornings.