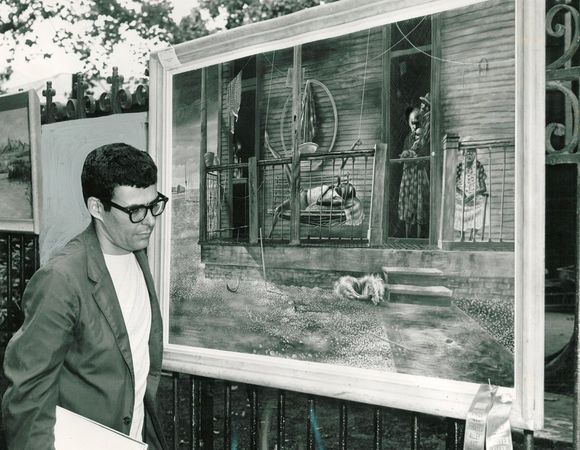 He was your quintessential bohemian.
Hard drinking, hard living guy in the Quarter.

One of Noel Rockmore’s paintings leaned lightly against a wall, unassumingly looking up at passersby from its spot on the French Quarter sidewalk, when Shirley Marvin walked nearby sometime in 1961 or 1962.

“It was a small gallery, and the painting was leaning against the outside wall,” Marvin remembers. “And I just liked it. I asked about it, it was unsigned, and (the owner) said ‘well, there’s an artist who used to live upstairs, but now he’s working with Larry Borenstein if you want to get to him.’ I think he sold (the painting) to me for $30.”

It was an inauspicious start, but the chance encounter with the painting, relatively small and showing a child in an abandoned car, sparked a decades-long relationship and a lifelong journey for Marvin and her family. Noel Rockmore has only recently been discovered for what he truly was — an unacknowledged master living and working in New Orleans just before the turn of the century — and it’s all the result of the forward-thinking Marvin. Now, the Louisiana Art and Science Museum will open an exhibition July 20 honoring not only Rockmore’s work and life but also, for the first time, Marvin’s place in it.

He was an eccentric — the kind of artist you’d more easily find on a bench sidled up to the bar rather than his easel but who still managed to produce a prolific oeuvre. She was dependable — a mother of three, a socialite amongst the arts crowd and an often political activist who sought equality for women and who once stood up to Earl Long over voting rights issues.

Marvin became friends with Borenstein, a local art collector and dealer who ran a gallery located in what’s now Preservation Hall and eventually rented the space to the Jaffes to open the historic New Orleans venue. Marvin joined Borenstein’s weekly morning coffee sessions with interesting locals, a kind of reborn Parisian salon behind the locked doors of Borenstein’s gallery. There, she began her patronage and friendship with Rockmore, but not before he attempted to elevate the stakes.

“Well, he explained to me that he had a lot of married women and it worked out nicely and didn’t interrupt their marriages, just a pleasant respite. I said, ‘Well, I’d just as soon be friends and forget the rest of it,'” Marvin said, sitting below her favorite Rockmore. The 1960s scene of the “Figaro Cafe” hangs above her couch, the bright, plump figures enjoying a cup of coffee with the New York skyline in their own window.

The pair spent the next years becoming close, Marvin buying pieces whenever Rockmore suggested them to her, though often only letting her take home the ones Rockmore believed were good enough.

He’d come from a privileged artistic upbringing in New York. Rockmore’s parents, Gladys Rockmore Davis and Floyd Davis, had received their own acclaim in illustrating, advertising and painting throughout World War II and bestowed upon their son the Davis name. After a successful few years in New York, Rockmore noticed the art world turning its gaze toward abstraction and pop art like that of Andy Warhol, and he felt there was no longer a place there for his own brand of Hieronymus Bosch-inspired realism.

Rockmore changed his name and fled to New Orleans to “dwell in creative obscurity,” though he ensured others of his impending fame for the rest of his life. He led a hedonistic lifestyle, loving and celebrating hard, befriending the French Quarter characters who often became the subjects of his work.

But with Marvin, things were different.

“There was always a lot of drama,” Marvin said. “I didn’t go in for big dramatic relationships, actually. He used to hold court at one of the restaurants in New Orleans … and he invited me to come … and I was late, and he yelled when I came in and said, ‘Where the hell have you been?'”

“I really didn’t like being yelled at, so I left, and I didn’t talk to him for three weeks or so. He didn’t yell anymore.”

Soon after Marvin joined Rockmore and the rest of Borenstein’s artistic crowd, one of her sons fell ill and she could no longer make the drive in from her Baton Rouge home for the weekly salons. To make up for it, Rockmore sent Marvin a monthly sketchbook and they began a prolific epistolary correspondence.

Eventually, the years passed, and Marvin slowly built up a collection of some 1,400 works: paintings, collages, sketchbooks, plus of course the letters. She even kept copies of her own letters sent to Rockmore. (“I saved the letters that I wrote because he would always say, ‘well you said this or that,'” Marvin said.”) The artist continued his impassioned lifestyle and Marvin stayed busy and raised her children.

Rockmore eventually died in 1995, and Marvin’s paintings found their way into storage units in New Orleans’ central business district. Getting on in years, Marvin forgot the breadth of her collection and never let on to its size to her children. A decade later, Hurricane Katrina hit and Marvin asked her son, Rich, and his wife, Tee, to go inspect and check on the storage units.

“We were overwhelmed,” Rich Marvin recalled. “We said, “Mom, you know, can you explain this?’ And she said she thought (Rockmore) was an undiscovered master, and the only way he could ever be discovered is if someone kept a chunk of his collection together so that people could get an idea.”

Since discovering the work, the Marvins created a website detailing Rockmore‘s history and have traveled across the country finding collectors and documenting works.

“Rockmore told everyone, ‘After I’m gone, I’m going to be recognized as a master genius and all of these will be worth thousands, millions of dollars,'” Rich Marvin said. “Everyone heard that, and they hung onto it.”

Despite all their travels, Tee Marvin said, “there’s nothing like Shirley’s collection.”

“Rockmore wanted her to have many of the pieces,” Tee Marvin explained.

Rockmore often said he created about 15,000 to 20,000 pieces, though the Marvins didn’t totally believe the number until they got deep into their research.

A set of portraits Rockmore created of jazz musicians and which hung and sold at Preservation Hall numbers at about 750 alone, though Marvin said she only owns a handful because Rockmore didn’t consider the series good enough for his patron, nor did he want to split the profits with Borenstein.

The artist created a vast array of series and saw himself through an equally vast expanse of artistic periods.

“We like to think of artists as having one style, one track they become known for, like one period of their output,” Weinstein told NOLA.com. “Some can reinvent, but it builds on what they had before. Rockmore would pick up whatever style he was into and pick it up again at a different time. Think of one minute his work was very realist with a high level of draftsmanship, but another painting the same year you can hardly tell it’s the same artist because the style is so different.”

Weinstein points to a series in which Rockmore painted the ships at the port of New Orleans — “an amazing number in a short period of time” — but then never painted another ship again.

The LASM exhibition looks at about 40 of Rockmore‘s works from between 1955 and 1987 and includes panels on Rockmore‘s and Marvin’s relationship.

“Her role was not in dictating to him what to paint. (Rockmore) wouldn’t allow anyone to do that. What she did was helpful … they set boundaries, they were friends,” Weinstein said. “She wasn’t doing it because the work she owned would go up in value, but she did it because this artist was so talented, and he was not an easy person to be around.”

Despite all the research, the Marvins and Weinstein both acknowledge the mystery Rockmore represents, this 1960s French Quarter character who demanded both creative obscurity and recognition for his genius.

“There’s still a lot of unanswered questions. (The Marvins) still have some gaps in their understanding,” Weinstein admitted. “But to what degree can you ever really understand the psyche of another human being?”

For Shirley Marvin, seeing out her lifelong dream of knowing Rockmore could achieve the fame the pair of them always knew he could has been reinvigorating for the 91-year-old.

“It’s very nice,” Marvin said. “I’m well on in years, and I’ve been through a lot of things. But this is very exciting.”

“The Faith and the Fury: Noel Rockmore and His Patron” opens at the Louisiana Art and Science Museum in Baton Rouge on July 20 and runs through Oct. 6.