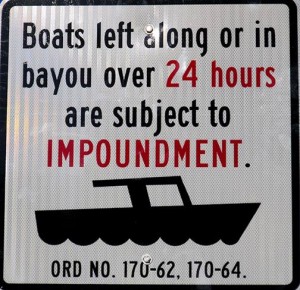 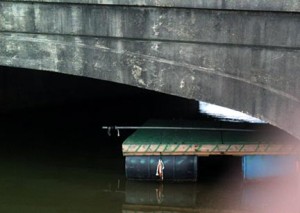 Unfortunately, yet another of the “floats” hides like a troll underneath the Desaix Avenue bridge over Bayou St. John. It is decorated with diagonal green stripes and still has the flag pole folded over on the deck of the float supported by barrels. The platform float was moved by the Magnolia Bridge where it languished for months.

No one objects to the fun, frivolity and debauchery of the parade. As Frank Davis says, “that’s natchully nawlins”. What neighbors object to is folks who leave garbage in front of their homes for months then refuse to take any responsibility for it. 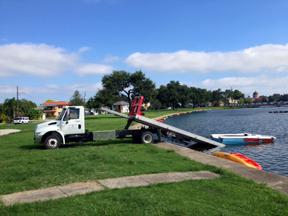 Councilmember Guidry requested Col. Sneed of Homeland Security to aid in the removal of the July 4th “float”. The boat has been removed. 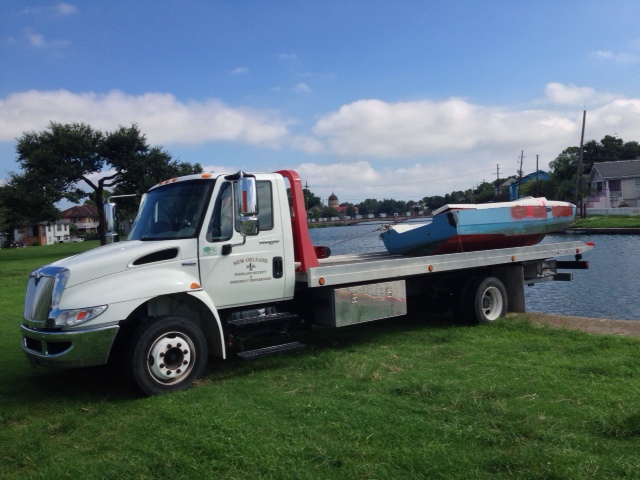 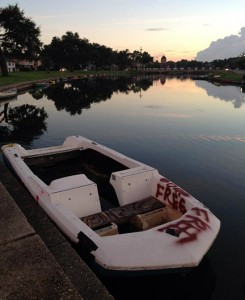 I received a message that the owners of the boat pictured to the left have painted over the offensive message on the side, bailed out the nastiness inside, moved it from the banks of Bayou St. John by the Dumaine Bridge to the water near the Orleans Bridge and are now offering it for free to the community. How nice.

This article is solely the opinion of Charlie London. Below is a letter sent to City and State officials.

With reports of West Nile virus in the news once again, I believe it is time for the City and the State to take action for the benefit of the citizens of New Orleans and begin removing boats on the bayou filled with mosquito larvae and algae. The boats in question are near where St. John Court meets the bayou on the Parkview side of the bayou. UPDATE: I spoke with Claudia Riegel of the New Orleans Mosquito Control Board and she said that testing has indicated that the West Nile virus is not as prevalent in New Orleans as it was last year. Ms. Riegel indicated that only one instance of West Nile virus has been found so far this year and it was in New Orleans East. This was as of 2 p.m. on September 13, 2013.

Boats thrown up on the banks of the bayou are havens for nutria. All boats sitting on the banks of Bayou St. John should be removed immediately. Bayou St. John is not a marina. There is a serious safety issue where Grand Route meets the bayou. Folks have taken to putting items underwater to chain their boats. Buckets filled with cement and poles are sticking up from the floor of the bayou. These are a hazard and should be immediately removed.

And, how long does my family need to be subjected to the boat with GUZZLING SEAMEN spray painted on the side? This boat has been there since the July 4th bayou boat parade and is now on the bayou near the Dumaine Bridge on the Parkview side of the bayou. I am all for the parade but part of their permit should require them to remove the platforms with barrels under them and any

GUZZLING SEAMEN left behind and it should be done immediately after the parade is completed… garbage like this should be picked up right after the boat parade just like any other parade in New Orleans. The GUZZLING SEAMEN has been spray painted over in red.

If folks chained their cars to trees in City Park, would the City or the State take action? You bet they would. The same respect should be given to the bayou. Remove the boats from the bayou today.

Let’s stop talking about removing boats from the bayou and get it done today. The health and safety of the citizens of New Orleans depends on it. CLICK ON ANY PHOTO FOR A LARGER VIEW.

Large amounts of boats chained to the bayou is a relatively recent phenomenon (since 2005). In 2009, the Orleans Levee District took action. Visit the link below for more:
http://www.nola.com/news/index.ssf/2009/08/bayou_st_john_boats_are_issued.html

The rings along the bayou meant for temporary mooring are having boats locked to them and left indefinitely. Should the rings be removed? Click on the photo of the ring for a larger view.

Click on any image in the slider to learn more.
*** 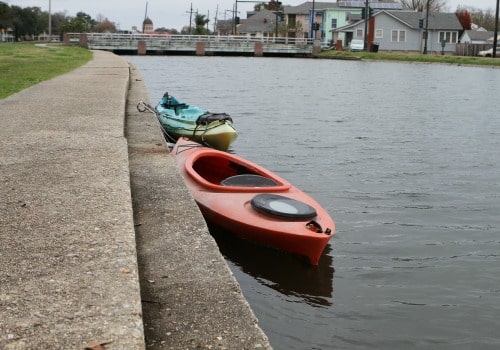 Six weeks after Councilwoman Susan Guidry proposed an ordinance prohibiting the mooring of boats for longer than 24 hours on Bayou St. John, docked canoes and kayaks filled with stagnant rainwater can still be seen cluttering the quiet waterway.

Guidry has proposed impounding the boats because they’re dangerous, according to the ordinance.

“Unattended boats collect rainwater that create pools of standing water, making them breeding grounds for mosquitos, which presents a danger to public health,” it reads.

The proposal for establishing impounding procedure comes at least four years after locals complained about unattended canoes and kayaks “littering” the bayou. Only, because city administration can’t find an agency to take on responsibility of dealing with the boats, the ordinance has sat stagnant in City Hall.

The decree was again deferred during a City Council meeting Thursday. That meeting marked the sixth week that’s gone by without any action taken on the agenda item since it was first introduced Nov. 7.

And some of the boats have been there longer, says Ray St. Pierre, the owner of R&S Auto Service on Hagan Avenue, near the corner of Moss and Lafitte streets.

“Those boats haven’t been moved in a month,” St. Pierre said, pointing to two abandoned boats at the end of the bayou that were filled with dirty water.

St. Pierre says he has mixed feelings about the boats. He likes for there to be canoeing on the bayou, but he’s against the private property going neglected on public land.

“I wish people would be responsible for them,” he said.

In 2009, the Orleans Levee District officials took responsibility for boats left in the water by notifying the owners via stickers and locking the boats in place if no action was taken, according to an article written then by nola.com.

“The Orleans Levee District asks that stored boats be removed from Bayou St. John, ” the notice read, according to the article. “If boats are not removed by Aug. 28, 2009, the OLD will lock the boats in place, and owners will be required to contact OLD officials for release.”

But it wasn’t really the Orleans Levee District’s jurisdiction, and the New Orleans Police Department is too busy fighting crime to deal with hauling boats out of the bayou, according to Michael Martin, the legislative director for Councilwoman Guidry’s office.

“The administration has told us that the NOPD doesn’t have the resources to have enforcement,” Martin said, adding that Guidry is “working to find the proper agency and proper way to enforce the impounding.”

Martin wouldn’t say which agencies the city is considering.

“At this point we’re just trying to find which ones have the capabilities first,” Martin said.

Some Mid-City residents, however, say that the decree shouldn’t wait any longer. As the ordinance explains, boats can also harbor snakes, become dangerous projectiles in storms and pose other threats. 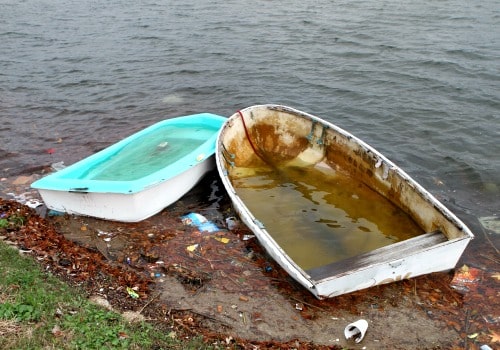 In September, Faubourg St. John Neighborhood Association Executive Board member Charlie London brought attention to the issue in his blog, highlighting the threat of West Nile Virus, which is contracted by infested mosquitos.

“With reports of West Nile Virus in the news once again, I believe it is time for the City and the State to take action for the benefit of the citizens of New Orleans and begin removing boats on the bayou filled with mosquito larvae and algae,” London said.

“For years, the State of Louisiana and the City of New Orleans and other agencies have been tossing the ball around on who is legally responsible for Bayou St. John,” he added. “I really don’t care who is legally responsible. I expect the City of New Orleans and the State of Louisiana to protect the health and safety of its citizens.”

London added that the bayou should be treated the same as the park or any other protected public land in the city.

“If folks chained their cars to trees in City Park, would the City or State take action?” London asked. “You bet they would. The same respect should be given to the bayou.”

Other residents, however, say they don’t want to see the boats go.

“I think it adds to the bayou,” said John Lacarbier, a 29-year-old spoken word artist who lives in Mid-City. “I don’t see it as a mega issue. And it looks kinda cool.”

AN ORDINANCE to amend and reordain Chapter 170, Article II of the Code of the City of New Orleans by adding Sections 170-62 – 170-67, to prohibit the mooring of boats along Bayou St. John for longer than twenty four (24) hours; to establish impounding and disposal provisions and procedures, and to establi sh fees relative thereto; and to otherwise provide with respect thereto.

SECTION 1. THE COUNCIL OF THE CITY OF NEW ORLEANS HEREBY
ORDAINS, That Sections 170-62 – 170-67 are hereby ordained to read as follows:

Section 170-63 Prior notice requirement.
A boat may only be impounded after the owner has been given prior notice by affixing printed information in a conspicuous place on the boat indicating that the boat shall be subject to impoundment unless the boat is moved by the owner or legal possessor by a specific date. The printed notice shall provide the date the notice was posted and the date by which the boat shall be removed. The removal date shall be no sooner than 48 hours after the date of initial posting.

Section 170-64 Impoundment.
Impounded boats shall be held by the City until claimed by the owner or legal possessor or disposed of in accordance with state law governing disposition of surplus municipal movables.
Any owner or legal possessor who seeks to recover an impounded boat shall be required to establish proof of ownership and pay all related impoundment fees at the time of reclamation.

Section 170-66 Sale or use of abandoned boats.
The City shall retain custody and possession of impounded boats for a period of not less than three months from the date of impoundment, unless reclaimed by the owner or legal possessor.
After such time, the City may sell the impounded boat for fair market value pursuant to state law governing disposition of surplus municipal movables or claim for City use. The purchaser of any unclaimed boat shall not be liable for the impoundment fee or any storage fees accumulated prior to the date of purchase.