The construction of the long-awaited Lafitte Greenway, overseen by the City’s Department of Public Works, will be completed by Durr Heavy Construction, LLC. 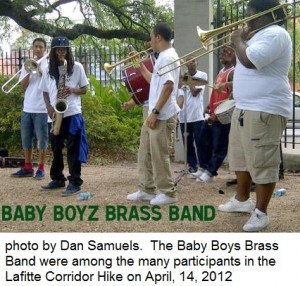 The City of New Orleans will hold a public meeting with Durr Heavy Construction for the purpose of communicating important information about how the construction will take place, as well as for public input and questions. The public meeting will take place on Wednesday, March 19 at 6pm, and will be held at the Sojourner Truth Neighborhood Center, located at 2200 Lafitte St, New Orleans.

Friends of Lafitte Corridor (FOLC) is reaching out to the residents and businesses along the Corridor about the meeting to encourage community members to get clarification on any questions they may have about the construction. “While the City’s bid documents are specific about certain aspects of construction, such as the time for completion and the amenities to be included in this initial build, there are also important aspects which are left to the contractor’s discretion, such as where on the Greenway construction will begin,” said FOLC Chair Samuel Spencer. “For this reason, this single public meeting is an important event, particularly to those residents and businesses along the Lafitte Greenway and greater Lafitte Corridor. FOLC will compile questions and also live tweet the meeting, so if you cannot attend, you can still submit questions to info@folc-nola.org and follow the meeting at twitter.com/folcnola.”

The funding available for the construction of the Greenway comes from Community Development Block Grant (CDBG) funds and will allow for the construction of a 12-ft-wide asphalt bike path from Basin Street to N. Alexander Street through currently-vacant city-owned land, once the site of a canal and railway. The construction will also include lighting, new trees and native plants, softball/baseball backstops, soccer goals, a walking path, bike racks, and rain gardens. The City currently anticipates the construction to take one year.

Friends of Lafitte Corridor is a member-driven nonprofit organization, founded in 2006, devoted to revitalizing Lafitte Corridor by working to build, program, and promote the Lafitte Greenway as a great public space.