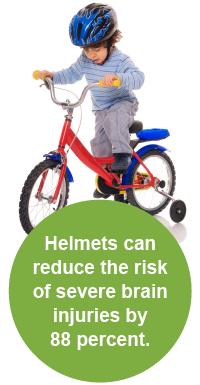 There are so many great reasons to ride your bike: It offers fun, freedom and exercise, and it’s good for the environment. We want kids and families to ride their bikes as much as possible. Here are a few tips so that you’ll be safe while you do so.

More children ages 5 to 14 are seen in emergency rooms for injuries related to biking than any other sport. Helmets can reduce the risk of severe brain injuries by 88 percent – yet only 45 percent of children 14 and under usually wear a bike helmet.

Cycling is fun for the entire family, but both you and your kids need to be properly equipped when riding bikes, skateboards, or anything with wheels.