photo and article by Ian McNulty 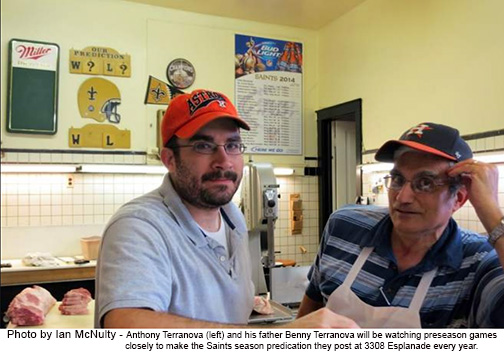 Preseason is the time for serious study for Benny Terranova, 60, and his son, Anthony, 30, who both man the butcher counter at Terranova’s Supermarket, their 89-year-old family grocery in Faubourg St. John. Each year, they post their prediction for the Saints season on a tally board above their meat-cutting station, paired with the team’s actual record as the season unfolds. But first, they’ll gather intel from the preseason games, then compare notes and come up with a unified father-and-son pick.

The board was a creation of the late Anthony Terranova Sr., Benny’s father, who installed it in the store in 2002. The younger Anthony Terranova, his grandson, remembers that they hit the Saints record precisely the first two seasons. Since then, they’ve been close, and the prediction board has become a focal point of the small grocery store during football season.

“People come in all the time, or we’ll see people on the streetcar, and they ask, ‘When’s the prediction coming? When are you going to call it?’ ” Benny Terranova said. “But you have to wait to see what (the Saints) have. That’s what preseason is for.”

Visit the link below for the rest of the story…
http://www.theneworleansadvocate.com/home/9993197-123/preseason-exhibition-games-matter-to