Please visit the link below for the rest of the story in THE ADVOCATE:
http://theadvocate.com/home/10255911-125/churchill-downs-inc-seeking-to 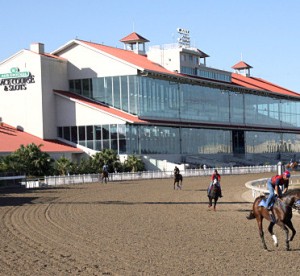 Three months after the Fair Grounds’ parent company promised to make significant upgrades to the venerable Gentilly race track, it has put the track up for sale.

Multiple sources familiar with the situation said Friday that Churchill Downs Inc., which has owned the Fair Grounds plus its 11 off-track betting facilities since 2004, has enlisted JPMorgan Chase to solicit requests for proposals from other gaming interests around the country, with a deadline of Wednesday.

Also, the Chicago-based Duchossis Group, CDI’s largest stockholder, has been approached about a deal for the Fair Grounds plus Arlington Park, near Chicago, which the Duchossis Group owned before it merged with CDI in 2000. However, a source with knowledge of Duchossis’ plans said Friday that such a deal is unlikely to happen at this point.

The requests for proposals came after at least two local interests, including Saints owner Tom Benson, made inquiries in recent weeks about purchasing the track, but they reportedly found the asking price, estimated at $125 million, too high. Greg Bensel, a spokesman for Benson, said Friday that Benson is not interested.

CDI purchased the Fair Grounds out of bankruptcy for an estimated $70 million.

Please visit the link below for the rest of the story in THE ADVOCATE:
http://theadvocate.com/home/10255911-125/churchill-downs-inc-seeking-to