State Representative-District 97 – Joseph Bouie, Jr.: Representative Bouie attended the meeting to formally introduce himself and his Legislative Assistant Lois Hazeur. He can be contacted at bouiej@legis.la.gov. Session begins on April 13, 2015, and even though it is a fiscal session, five non-fiscal bills can be introduced.

Andrew McDaniel – Crescent City Farmer’s Market and Timmy Perrilloux – local farmer: Mr. McDaniel is the Market Community Coordinator for the non-profit marketumbrella.org and he brought Mr. Perrilloux, a local farmer, to inform the members on what the organization does and why farmers markets should be supported. The purpose of the non-profit is to bolster the tradition of public markets. They operate three farmer’s markets in the city, they work with school children, and participate in the Fruit & Veggie Prescription Program. Mr. Perrilloux brought samples of his vegetables to show what can be found at the market and the affordability of the produce.

Fairgrounds Patrol – Captain Scott: Captain Scott went over crime statistics for the area patrolled by the Fairgrounds Patrol and distributed a 9-page handout showing crime statistics from 9/6/2014 to 12/8/2014 comparing FSJ numbers to the city as a whole. He discussed the rash of residence burglaries on De Soto Street and said at least 4 of the burglaries can be linked to juveniles. Three scooters have been stolen and he reminded residents to make sure scooters are locked up. He discussed the lapses in shifts; there were 5 missed shifts in 30 days.

City Councilmember – Susan Guidry: (1) City adopted a budget on November 20, 2014. The budget includes street repairs, LED conversion for street lights, and the Lafitte Greenway which is 60% complete. (2) The first of the year the City Council will be working on the Comprehensive Zoning Ordinance again. (3) Councilmember Guidry, Chair of the Criminal Justice Committee, is reviewing NOPD’s handling of sex crimes. (4) The Cooperative Endeavor Agreement (CEA) for Re-Bridge is stalled due to an issue with putting everything in one CEA. The Magnolia Bridge is under the DOT and Dumaine Bridge is under the City. Councilmember Guidry and Greg Jeanfreau met with the City Attorney to discuss this issue. The good news is that the design phase of Magnolia Bridge is underway and has not been stalled. (5) On December 8, 2014, 19 boats were ticketed by the Mosquito Board. Some were harboring mosquitoes. After 60 days the boats will be picked up by the Police. (6) Alcoholic beverage license was granted to Half Shell on a temporary status by the Revenue Department, and she is looking into that policy. S’Express came before the ABO on 11/18/2014 and their erroneous high-content permit was denied and they were told to cease selling high-content alcohol immediately. (7) The Voodoo Festival was not perfect but vastly improved over last year. This year the council demanded a “sound management plan” before permits could be issued.

Councilman Guidry was asked about the number of boating signs along the bayou. She said she tried to minimize the number, but ultimately the number and placement of the signs was up to the Department of Public Works.

NOPD Quality of Life Office – Officer Kenny Gill and Sergeant Alexis Hawkins: Sergeant Hawkins reminded neighbors to lock car doors and not to leave valuables visible in the car. Officer Gill was asked if he could check out S’Express for illegal alcohol sales, parking violations, and a fence that remains open.

President Jeanfreau asked for nominees from the floor and there were none. Conrad Abadie made the motion to accept the Executive Board ballot by Acclamation. Yvette Folker made the second. All members present were in favor and none were opposed. The motion passed.

Committee Reports/Updates/Actions
Membership Outreach Committee – Linda Landesberg announced the upcoming Feast of the Epiphany Dinner on January 5, 2015.
The event will be at Café Degas to benefit the FSJ Community Garden. Details in the link: https://fsjna.org/2014/12/jan-5-dinner-degas/

Treasurer’s Report – Michael Cohn is acting as Treasurer, and his report is on file.

Public Safety – Jim Danner warned about the rash of crimes that usually occur right before Christmas. He reported that there is still money for crime cameras.

Zoning Committee – Steve Mardon reported that the Gentilly Mart will be seeking a high alcohol permit.

Linda Landesberg thanked President Jeanfreau for his outstanding job as President of the FSJNA.

Adjournment – A motion to adjourn was made by Conrad Abadie.
Winter Jeanfreau made the second and it passed by unanimous consent.
The meeting was adjourned at 8:00 p.m. 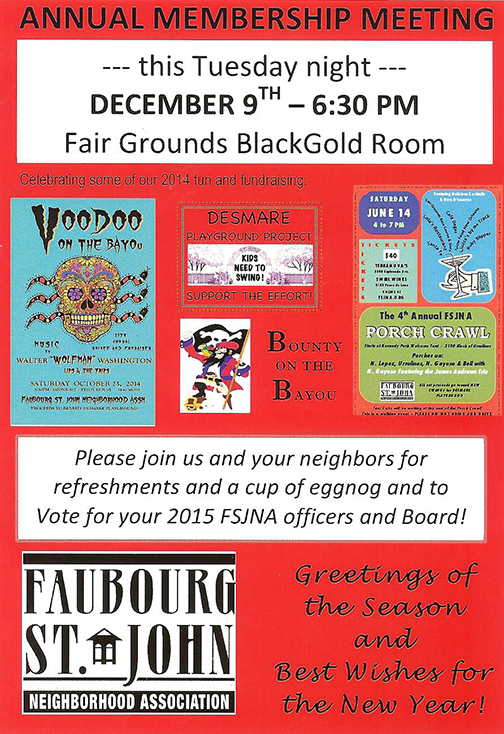 Election of Executive Board Members 2015