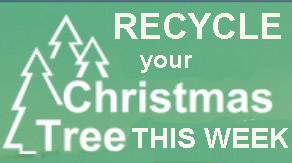 The best way to avoid a mess removing your tree is to place a plastic tree bag (available at hardware stores) underneath the stand when you set the tree up. You can hide it with a tree skirt. Then, when the holidays are done, pull the bag up around the tree, stand and all, and carry it outside. Obviously, you will want to remove the stand before recycling the tree. If some needles do scatter inside, it is better to sweep them up; as needles can clog vacuum cleaners.

Real Christmas Trees are biodegradable, which means they can be easily reused or recycled for mulch and other purposes.