Faubourg St. John neighbor Tommy Lewis explained the benefits of the Faubourg St. John Neighborhood Association’s quest to make Desmare Playground a great place to play. He was so convincing that they agreed to donate ten thousand dollars to the cause! Many thanks to the Zemurray Foundation for their generous donation and to Tommy Lewis for going the extra mile.

The man who made the banana an exotic emblem of affluence for mass consumption was himself a poor immigrant. Samuel Zemurray came to America as a teenager, amassed a fortune to rival the Rockefellers and built great cultural institutions.

Zemurray was a Jewish immigrant who grew up on a wheat farm in western Russia and was sent to the U.S. alone in his early teens. “Unlike a lot of his compatriots, he was a giant man,” Cohen tells NPR’s Scott Simon. “At the time he was like 6 feet 3 inches and he was a big, tough guy.”

Samuel Zemurray came to America from Bessarabia, in Western Russia, in 1892 at age 14 or 15, with nothing but his brain and ambition. He eventually took over United Fruit and made a fortune estimated at $30 million back in the days when that was a genuinely vast fortune. He lived in a New Orleans house with a third-floor ballroom complete with a pipe organ and a crystal chandelier; the building now serves as the residence of the president of Tulane University.

Zemurray saw his first banana in Selma, Ala. He paid a visit to Mobile, where the big fruit ships came in, and saw piles of bananas thrown aside at the Boston Fruit Company. When he asked what happened to the bananas in those piles, he was shocked to learn they were garbage.

“The rule was, if a banana had one freckle it was called ‘a turning’ and if it had two freckles it was called ‘a ripe,’ and they said you could never get it to the market in time. It would rot,” Cohen explains. Zemurray bought the rotting bananas for next to nothing. “If you want to talk about something that’ll make you a good salesman, it’s a banana that you have six hours to sell before it rots.”

Zemurray took those “turning” and “ripe” bananas and rented space on an Illinois Central Railroad train. The train moved so slowly that the bananas began rotting along the way. But he worked out a deal with the railroad conductors and the telegraph guys: They would wire the grocery store owners, who would come and meet the train.

“He sold the bananas right out of the boxcars,” Cohen says. “The New York Times said he used boxcars like a guy on the Lower East Side uses a pushcart.”

Zemurray became incredibly wealthy and was philanthropic with his money. He made generous donations to Tulane University and helped Jewish refugees after the war.

Zemurray convinced the Dominican Republic dictator Rafael Trujillo to allow in some 5,000 Jewish refugees escaping Nazi Europe. He paid for dozens of ships to help Jews in D.P. camps after the war break the British blockade, which barred Jews from entering Palestine. And when the initial vote to create the Jewish state failed at the United Nations in 1948 — but was close enough to allow for a re-vote within 72 hours — Zemurray went to work.

From his mansion in New Orleans (later donated to Tulane, and now the university president’s house), he called several Latin American leaders and got enough of them to switch their votes. “Knowing about the work of Zemurray,” Cohen writes in his book, “certain yes votes that might otherwise seem mysterious — Costa Rica, Guatemala, Ecuador, Panama — suddenly makes perfect sense. Behind them, behind the creation of the Jewish state, was the Gringo pushing his cart piled high with stinking bananas.”

United Fruit owned one of the largest private navies in the world. It owned 50 percent of the private land in Honduras and 70 percent of all private land and every mile of railroad in Guatemala.

When Zemurray took over United Fruit and turned it around, he told Fortune magazine, “I realized that the greatest mistake the United Fruit management had made was to assume it could run its activities in many tropical countries from an office on the 10th floor of a Boston office building.” 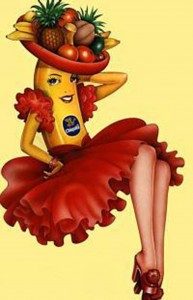 The original Chiquita brand logo was commissioned in 1943 by United Fruit when Zemurray was president. It was drawn by cartoonist Dik Browne, creator of Hagar the Horrible. The logo was based on salsa entertainer Carmen Miranda.

After World War II, commercials rolled out featuring the Chiquita banana jingle, which begins “I’m Chiquita Banana and I’ve come to say…” The song touted the benefits of bananas and advised consumers how to eat and store them.

Before he died in 1961, at 84 and with a net worth estimated at $30 million, he left many gifts to the city. He not only built one of the first hospitals for black women in the city, but he also gave millions to Tulane. His house is now the president’s, and several buildings bare his name.