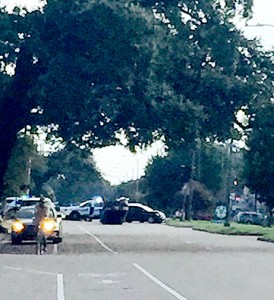 About 8 a.m. on July 30, 2015, a car flipped over at the intersection of Broad and Esplanade Avenue. The car appears to have ended up on its roof after an accident with another vehicle.

The life you save may be your own!

Common sense and routine maintenance can greatly increase your odds of avoiding a rollover and walking away from one if it happens. Here are some survival tips:

Newer is better. The improvement might be because more people are buckling up, or because vehicles have better build quality and safety systems, but it’s probably a result of both. Either way, it makes sense to choose a vehicle with the most up-to-date safety systems. Especially important are electronic stability control and side-curtain air bags.

Wear safety belts. Belts help keep you in the seat so you are not tossed around in a rollover crash. About half of rollover fatalities occur when people are partly or completely ejected from the vehicle. Don’t think it’s good to be “thrown clear.” In all kinds of crashes, nearly three-quarters of people ejected from a vehicle are killed.

Check the tires. Make sure all the tires are in good shape and properly inflated to the pressure recommended by the vehicle manufacturer. Check the inflation pressure at least once a month. Replacement tires should be similar to the vehicle’s original set.

Watch the load. Overloading any vehicle, particularly SUVs and pickups, decreases its stability. The worst practice is to place heavy loads on the roof. Try to stay well within the load ratings specified by the manufacturer. (They should be noted in your owner’s manual.) Try to place the heaviest cargo low on the floor and as far from the tailgate and as close to the center of the vehicle as possible.

Watch your speed. Speed makes a vehicle’s tendencies to roll over more severe, and it also makes more demands on a driver’s attention and skill. About 40 percent of fatal rollovers involve excessive speed, the government reports.

Beware on country roads. Almost three-quarters of fatal rollovers occur in rural areas on roads where the speed limit is 55 mph or more. According to the National Highway Traffic Safety Administration, those roads tended to be undivided highways without barriers.

The information above was obtained from Consumer Reports.   The original article is in the link:   http://www.consumerreports.org/cro/2012/02/rollover-101/index.htm