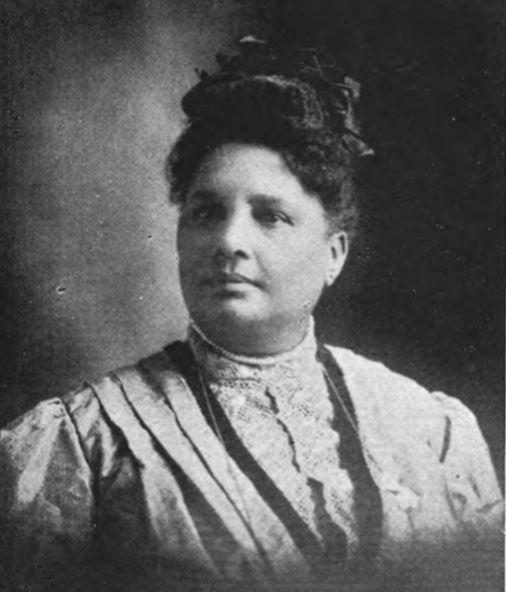 Mrs. Frances Joseph-Gaudet was born in a log cabin in Holmesville, MS, of African American and Native American heritage. She was raised by her grand parents and lived with her brother in New Orleans where she went to public and private schools and attended Straight College. Widowed early, she dedicated her life to social work and worked with the Prison Reform Association assisting prisoners unjustly accused. Starting in 1894 she held prayer meetings, wrote letters, carried messages, and secured clothing for black prisoners and later for white inmates as well. Her never ending encouragement and support of prisoners won the support of prison officials and city authorities, the governor, and the Prison Reform Association.

Upon her return from serving as a delegate to the Women’s Christian Temperance Union international convention in Edinburgh, Scotland in 1900, she attended hearings of the juvenile court where she assumed responsibility for young blacks arrested for misdemeanor or vagrancy and worked toward their reform. She was the first woman, black or white, to support juvenile prisoners in Louisiana and her efforts helped found Juvenile Court. When her home grew too small for this endeavor, she purchased a farm on Gentilly Road and founded the Colored Industrial Home and School which later became the Gaudet Normal and Industrial School. The school was also a boarding school where working mothers could leave their children. Through various fundraising activities the school expanded to 105 acres with dormitories and many buildings.

Mrs. Gaudet was the principal of the school until 1921 when she gave the school to the diocese of the Protestant Episcopal church of Louisiana with the understanding that they would continue the school, or if sold, donate the proceeds to a similar school. In the 1950s the school closed, but in 1954 the Gaudet Episocopal Home opened in the same facility serving African American children ages four to sixteen. Although this home is now closed, the endowment continues to fund Scholarships and other ministries in the Episcopal Diocese of Louisiana. St. Luke’s Community Center on N. Dorgenois Street honors Mrs. Gaudet with a hall in her honor. Mrs. Frances Gaudet spent the last years of her life in Chicago, Illinois, where she died in December 1934.

Photos below from 1923 put into public domain by the New York Public Library in 2016.
Click on the photos for a larger view. 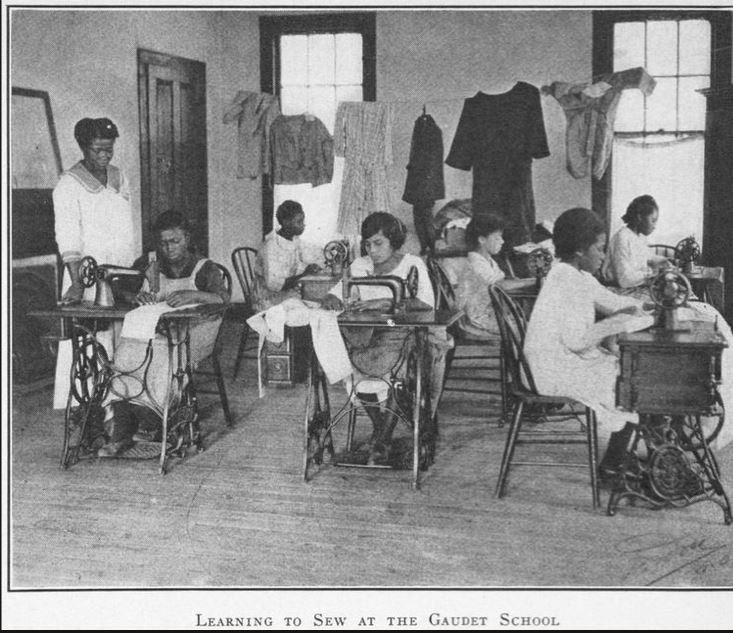 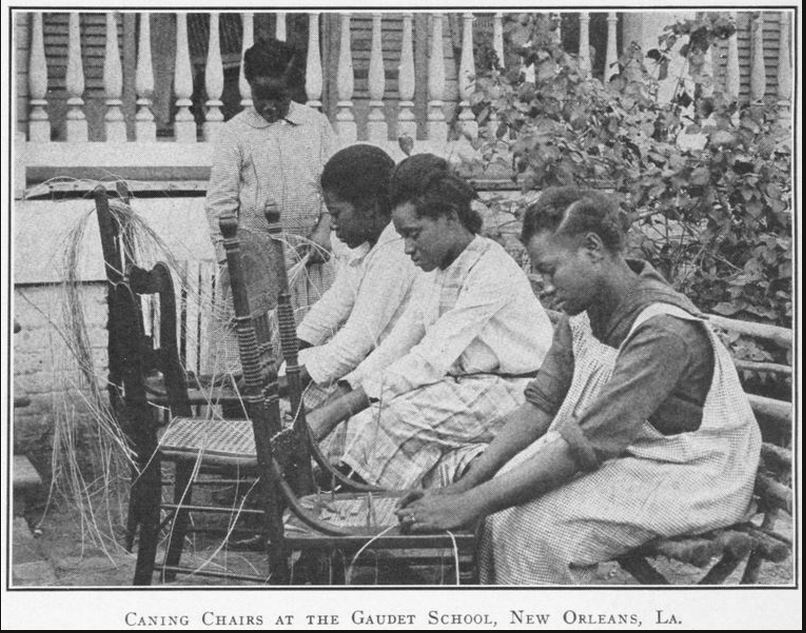 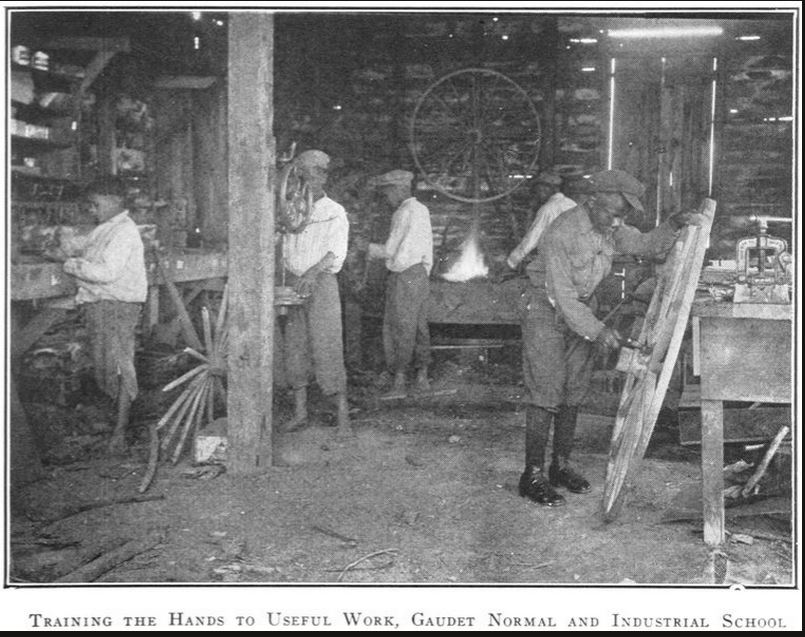 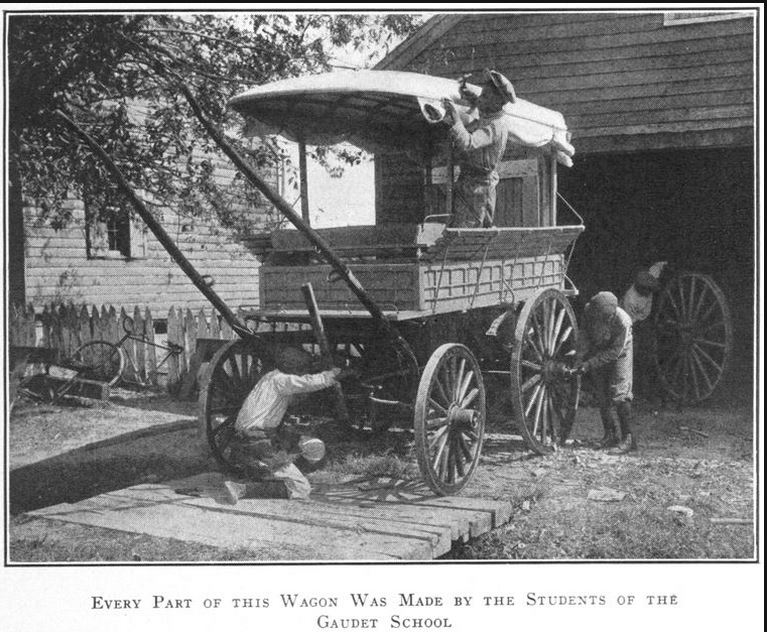 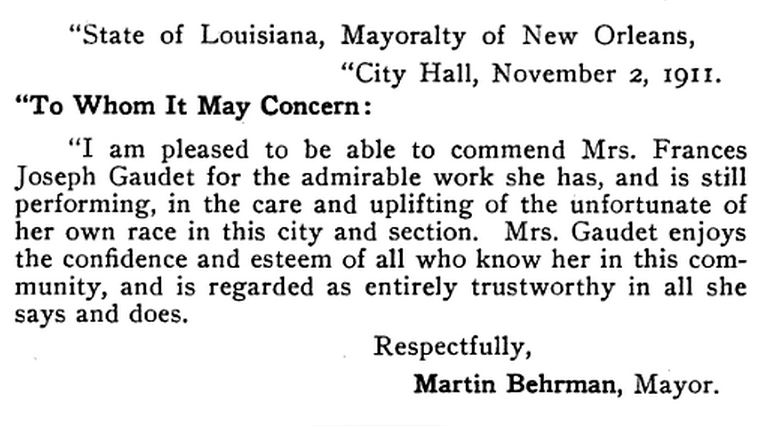 The more we learn about Blessed Frances Gaudet, the early twentieth century pioneer in the education of black children in Louisiana and prison reform nationally related to incarceration of minors, the more we learn about the people who championed her causes, provided entree to public officials with power and supported her ambitious activities.

A stellar representative of such a group is Ida Slocomb Richardson whose was described in her obituary as the city’s great benefactor. Mrs. Richardson’s support is recognized as among the primary reasons that the Episcopal Diocese was asked to assume oversight of the Gaudet educational programs as Mrs. Gaudet was aging and losing her eye sight. Mrs. Richardson’s story is interesting in and of itself. In this first article, we will be introduced to this woman who was a giant of generosity and determination.

In So Great A Good, written by Betty and Hodding Carter, they report that people who remembered Mrs. Richardson described her “a short, moon-faced woman with a beneficent smile, a large tortoise shell hearing trumpet, and a gold topped cane with which she rapped for attention”.

Born in 1830, she is described in her obituary eighty years later as “one of New Orleans most generous citizens, one who for many years has been preeminently identified with its charity and it public causes… Mrs. Richardson’s giving was ever of the most unostentatious sort, and even her princely gifts to Tulane were subjects conscientiously avoided by her in conversation.”

She was the recipient of the Times-Picayune Loving Cup in 1907, the second female recipient. Her financial gifts were often given anonymously, some presumably in response to causes for which she was soliciting public support. The “worthy poor” attracted her interest and she was quick to take on the challenge of eliminating overwhelming debt for a not for profit institution. Christ Church Cathedral as the successful recipient of her rescue campaigns more than once. Other women were frequently solicited to assist her in her causes. She founded the Woman’s Auxiliary of the Woman’s Board of Missions of the Episcopal Church (now known as Episcopal Church Women) in Louisiana and was president for over twenty one years. More than once she took her cook to the national Woman’s Board of Missions meetings not to provide meals for her but so her congregation, St. Luke’s Church, could be informed and involved. St. Anna’s Asylum was one of her favorite charities as was Christian Women’s Exchange. Mt Vernon (George Washington’s home) was a frequent recipient of funds.

Her family members were long time parishioners of Christ Church. She was very active there until she moved her membership to St. Paul’s Church (then located in the Lower Garden District) because of the missionary zeal of the rector. She was buried from St. Paul’s Church. In her will she left $5,000 each to Christ Church and St. Paul’s.

No mention of Ida Richardson can ignore her tremendous involvement in the founding and expansion of Tulane University. She is credited with being one of the founders of the University. She gave lavish financial support of the medical school where her husband became dean, and is said to have masterminded the appointment of William Preston Johnston as first president of Tulane in 1884. She is the person credited with presenting the idea to Josephine Newcomb that she memorialize her deceased adolescent daughter by establishing Newcomb College.

Mrs. Richardson memorialized her husband by giving $100,000 to build the Richardson Building on Tulane Avenue, a part of the Tulane Medical complex. Mrs. Richardson became very interested in medicine upon her marriage to Dr. Tobias Gibson Richardson in 1868. A widower whose first wife and children were lost at sea while returning to New Orleans from New York, he shared his second wife’s zeal for doing good.

He was an author and leader in national medical circles. During the Civil War, he served on General Braxton Bragg’s staff. Dr. and Mrs. Richardson shared a very happy marriage and were generous with their inherited wealth. They had a wide circle of influential friends. They had no children.

Traveling was a great shared interest and in her obituary the paper noted that Mrs. Richardson was reported to be the first woman to ever ascend Mount Popocatepetl. Indeed she was a remarkable woman.   Next issue (below), we will concentrate on Mrs. Richardson’s involvement with Frances Gaudet and the Gaudet School.

The original article can be found at: http://www.edola.org/wp-content/uploads/2015/07/Churchwork-august-2013.pdf 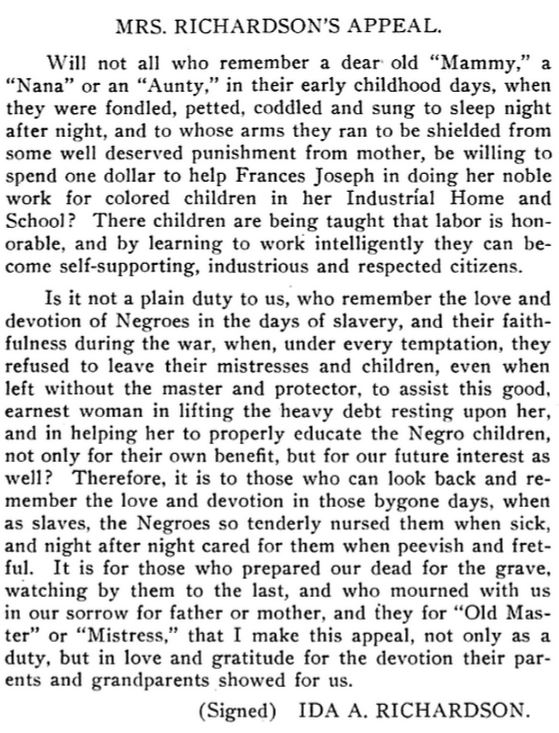 “She Was One of God’s True Servants, a Treasure”
By Harriet Murrell, Diocesan Archivist

Editor’s Note: This is the second of two articles about the partnership between Frances Gaudet and Ida Richardson. The first appeared in the August 2013 issue (above).

The title of this piece is not a description of Frances Gaudet but is a quote from Frances Gaudet’s description of Ida Richardson whom Mrs. Gaudet considered “my dearest friend”. It is taken from Mrs. Gaudet’s autobiography He Leadeth Me and comes at the beginning of the final chapter that describes the creation of the Colored Industrial Home – “an industrial home and school, where the homeless children of my race may be cared for and trained for lives of usefulness”.

Mrs. Gaudet returned to New Orleans in 1901 from a six month stay in Europe and the northeastern United States attending an international convention of the W.C.T.U. (Women’s Christian Temperance Union) and lecturing on the legal actions against blacks, especially the incarceration of black children in Louisiana. Her expertise was based on her nearly ten years of volunteer work in visiting New Orleans prisons and houses of detention on behalf of black families and their imprisoned children. She was known and respected by the mayor and civic leaders including Mrs. Richardson. She had access at any time to any prison in New Orleans. Local newspapers covered her activities and ran articles in support of her drives for funds to care for these children.

Mrs. Gaudet would often agree to take children or young adults into her French Quarter cottage where she worked as a seamstress supporting herself as a divorced woman with three children. Her purchase of 102 acres five miles from the center of New Orleans with several buildings on it for $5,000 became possible with the support of the Times-Democrat, Mrs. Richardson and others. A new girls’ dorm, completed in 1911 was named for Mrs. Richardson who had died the preceding year at the age of 80. Fundraising meetings for white people with Mrs. Gaudet present had been held at the Richardson home on St. Charles Ave. more than one of which raised over $1,000.

Mrs. Richardson wrote long, flowery letters to the newspapers. In one she reminded readers of the days when they were “fondled, petted, coddled, and sung to sleep night after night” by a family “mammy” and suggested those fond memories should prompt people to “spend one dollar to help Frances Joseph (she had not married A.P. Gaudet at that time) in doing her noble work for colored children”. The Picayune newspaper ran a series of columns written by Mrs. Richardson as the paper endorsed the funds drives saying that no “institution could have a nobler or more practical mission than rescuing homeless Negro boys and girls and teaching them some honest craft by which they can make a livelihood”. Such appeals were very effective.

Mrs. Richardson’s death did not end the involvement of influential white people in the work being done at Gaudet School. The focus and the name changed several times to meet current needs and in 1919, Frances Gaudet first officially offered the school to the Episcopal Diocese. She stated that as a group, the Episcopal Church Women (then an auxillary to the work of the churchmen) was the most effective group with whom she had worked. She knew that effective fund raising was essential to the effort that was growing. At the diocesan convention of 1921, the delegates voted in favor and the school was turned over to the Diocese on March 14, 1921.

A new chapter in the unfolding determination of Frances Gaudet to provide what she felt was the most productive future for black children was unfolding. The boarding and day school for over fifty boys and girls in grades one through high school had three academic teachers and several instructors in the industrial skills for boys and girls separately. Mrs. Gaudet was principal and lived on campus. About a quarter of the students were referred by the court but the number of self admitting students was growing.

One of the major sources of funding and keen interest for many years was the American Church Institute for Negroes, an organization of the Episcopal Church. Local fund raising, along with participation in what became the Community Chest continued along with the formation of an auxiliary of active women who bought library and athletic supplies.

Religious studies were added to the curriculum, a chaplain was added to the staff and a chapel was built over ten years later. Through this time of growth and change, education remained the focus of aging Mrs. Gaudet and her faculty and staff. What changes in the potential for black children was happening-and more was to come. We shall continue to tell the story.

The original article can be found at: http://www.edola.org/wp-content/uploads/2015/07/Churchwork-november-2013.pdf 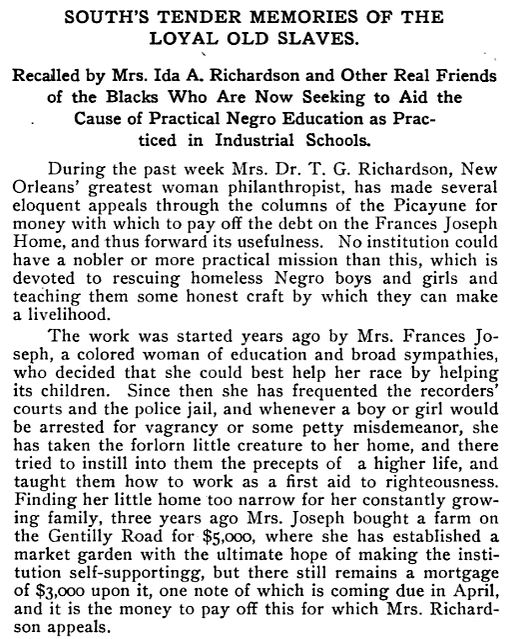 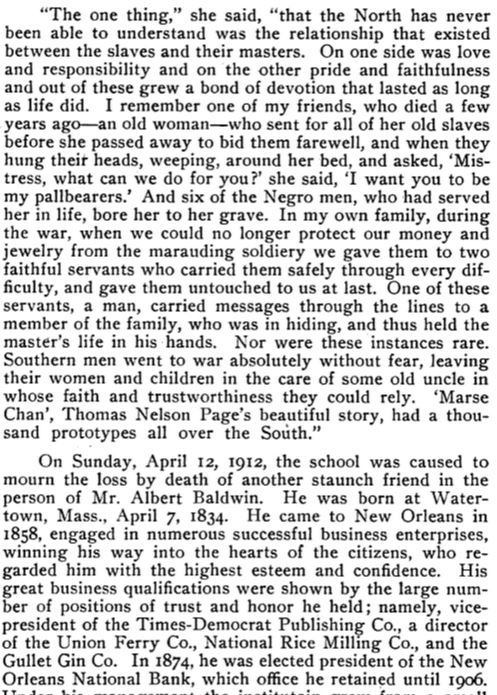 Even more information can be found in the book below. Click on the book… 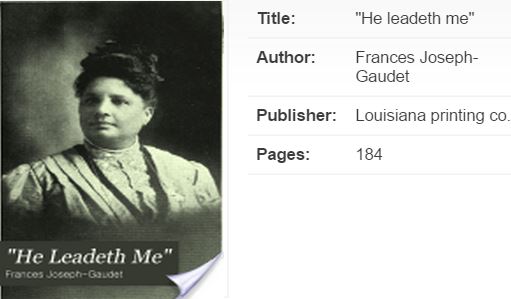