Every year, hundreds of bicyclists die in traffic accidents involving motor vehicles, and thousands more are injured, according to the National Highway Traffic Safety Administration (NHTSA). Bicycling advocates say drivers can play a big role in reducing those grim statistics, paving the way for peaceful coexistence. It’s a two-way street, of course. Bicyclists have responsibilities, too.

1. Appreciate Bicyclist Vulnerability
2. Know Bicyclists’ Rights: Drivers sometimes have little idea of the traffic laws that apply to bicyclists. A recent visitor to a message board discussing cyclists and motorists wanted to know why cyclists can’t just use the sidewalks.

In fact, bicycles in the roadway are considered vehicles. NHTSA says cyclists 10 years and older should behave as though they were vehicles on the street, riding in the same direction as other traffic that’s going their way and following the same traffic rules.

The cyclists, then, are on the same level as motorists. Information on the California DMV Web site spells out the law in the Golden State: “Bicycle riders on public roads have the same rights and responsibilities as motorists, and are subject to the same rules and regulations.”

The site encourages drivers to ”look carefully for bicyclists before turning left or right, merging into bicycle lanes and opening doors next to moving traffic. Respect the right of way of bicyclists because they are entitled to share the road with you.”

3. Adjust That Attitude: Motorists tend to think of cyclists as ”in their way,” Clarke says. Rather, they should think of them as equals, just as entitled to the roadway as drivers are, says Clarke and other experts in the cycling community.

4. Consider the Benefits of Bicycling — for Drivers: “One cyclist on the road is one less car,” Mionske says.

5. Spare Them the Right Hook: Intersections are venues for serious car-cycle collisions. Drivers making right turns, especially, should watch out for cyclists. A cyclist may be a little behind and to the right of you, and may be planning to ride straight ahead. If you don’t signal your right turn, you could wind up hitting each other, with the point of contact somewhere on your car’s right side. If you are trying to figure out if a nearby cyclist is planning to turn right, look for his raised left hand in a squared position , or an extended right hand.

6. Beware the Left Turn: A driver trying to make a left turn sees an oncoming bicyclist, but the driver figures he has plenty of time to complete the turn. Sometimes, that’s not true. Brustin says it’s a common scenario: After a collision, a driver often says he didn’t realize the cyclist was going that fast.

7. Give Cyclists 3 Feet of Clearance: More than 20 states have passed laws requiring motorists to give bicycles on the roadway about 3 feet of space, Blumenthal says.

8. Look Around — but Not at Your Phone

9. Look Before You Exit Your Car: Cyclists are terrified of being “doored.”

10. Accept That Bicyclists Are Here To Stay: Bicycling is on the rise. People are taking it up for exercise or to reduce commuting costs. New York City, Portland, Oregon and San Francisco, among other cities, all have seen an increase in commuter cyclists. It’s time to make peace with them — for everyone’s safety. 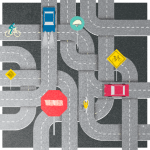