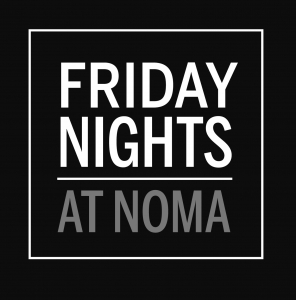 Friday Nights at NOMA: Music by The Roamin’ Jasmine

This Friday night at NOMA, check out a cooking demonstration in Cafe NOMA, live music by The Roamin’ Jasmine, and a film screening on designers Ray and Charles Eames, whose work is featured in the current exhibition The Essence of Things – Design and the Art of Reduction: An Exhibition of the Vitra Design Museum.

About The Roamin’ Jasmine

Forged out of the lively street music scene in the French Quarter of New Orleans, the members of Rhe Roamin’ Jasmine found one another busking under the swampy Louisiana sun, along the banks of the Mississippi, or after hours in storefronts on Royal, Frenchmen and Decatur Streets. Inspired by the city’s history of ethnic and musical diversity, and fresh out of music school at University of Miami, bassist, vocalist, and bandleader Taylor Smith began to collect some of his favorite old blues, jazz, and country tunes, while also composing some of his own songs.  Arranging this collection for a six piece jazz ensemble and giving them a healthy dose of New Orleans flavor, he decided to share his work with some like-minded colleagues, and bring it to the streets of New Orleans. The Roamin’ Jasmine repertoire explores 1920’s era speakeasy blues, vintage calypso from Trinidad, seminal 1950’s New Orleans rhythm & blues, and original compositions, all set to traditional jazz instrumentation with original arrangements.

Chefs of the Ralph Brennan Restaurant Group will soon demonstrate their own culinary masterpieces at Café NOMA’s Artful Palate, the fifth annual summer cooking series featuring nine artfully inspired demonstrations at the historic New Orleans Museum of Art. Friday evenings are FREE for all café guests and patrons to partake in the presentation, and savor samples as each artful dish is created.

In conjunction with the launch of NOMA’s exhibition The Essence of Things: Design and the Art of Reduction, the talented executive chefs, sous chefs and mixologists of Café NOMA, Ralph’s on the Park, Red Fish Grill, Brennan’s, and Napoleon House will share their culinary vision inspired by the exhibits focus on the art and practice of minimalism. The Artful Palate demonstrations will take a minimalist approach to cooking; featuring local seafood, meats, fruits and vegetables with simplistic recipes highlighting the core of their natural essence.

The Ralph Brennan Restaurant Group is proud to operate Café NOMA, one of the “Best Museum Restaurants in America” according to Travel + Leisure and Food & Wine magazines. Artful Palate is held every Friday night at 6:30 pm from July 15 to September 9. It is free of charge and open on a first come, first served basis. Come early for an evening of enlightening art appreciation — in the very best of taste!

About Eames: The Architect and the Painter

The husband-and-wife team of Charles and Ray Eames are widely regarded as America’s most important designers. Perhaps best remembered for their mid-century plywood and fiberglass furniture, the Eames Office also created a mind-bending variety of other products, from splints for wounded military during World War II, to photography, interiors, multi-media exhibits, graphics, games, films and toys. But their personal lives and influence on significant events in American life – from the development of modernism, to the rise of the computer age – has been less widely understood. Narrated by James Franco, Eames: The Architect and the Painter is the first film since their death dedicated to these creative geniuses and their work.  (85 minutes)