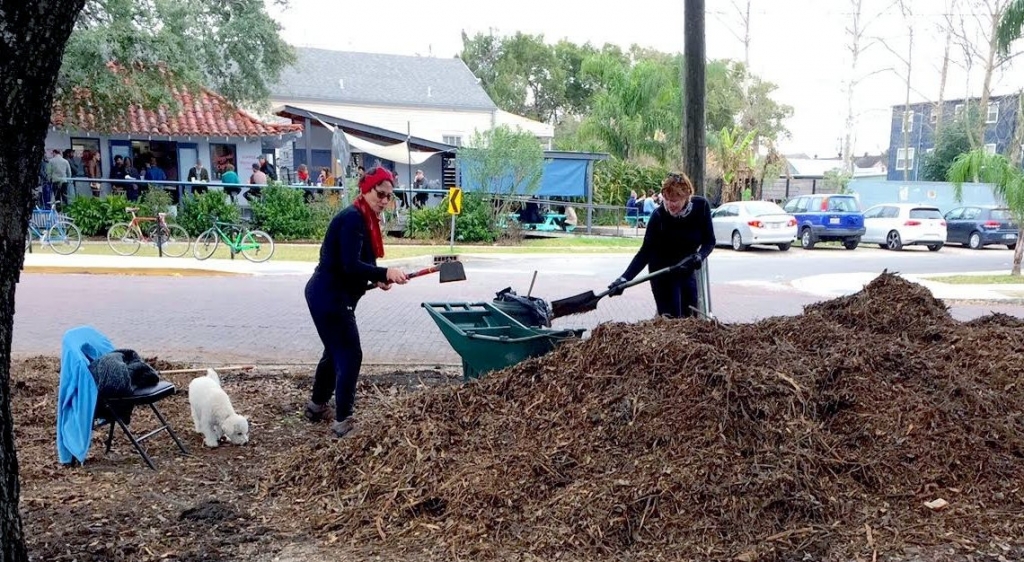 Veteran volunteers and a new friend tackled the first step in recovering a lost pocket park at Bayou Road and N Dorgenois. A giant mulch pile courtesy of Park and Parkways personnel appeared and challenged the small but determined City Beautifer crew to spread it. Earlier, Phillip Mollere brought two truckloads of mulch and started the project.

Sally Gaden and Annie LaRock (with super-pup Fang) led the effort, cleaning gutters, picking up litter and spreading the mulch.

Passerby, and new member, Josh Lewis pitched in, lent a hand and taught us something about “microbial diversity”! (He teaches Ecology at Tulane!)

Much appreciated praise and approval came from onlookers Josh Barbee (Ursulines Triangle CBC Guy), Ben the welder, and Robert Tannen whose art piece occupies the other end of the park.

I think all agree the place is looking more like a park than a parking lot!

Thanks to all involved in getting this park back on track. 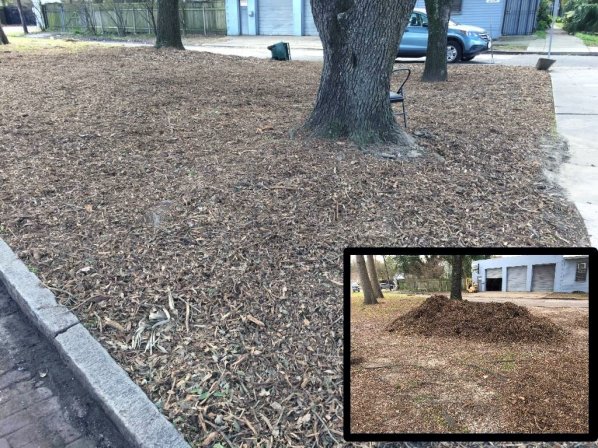 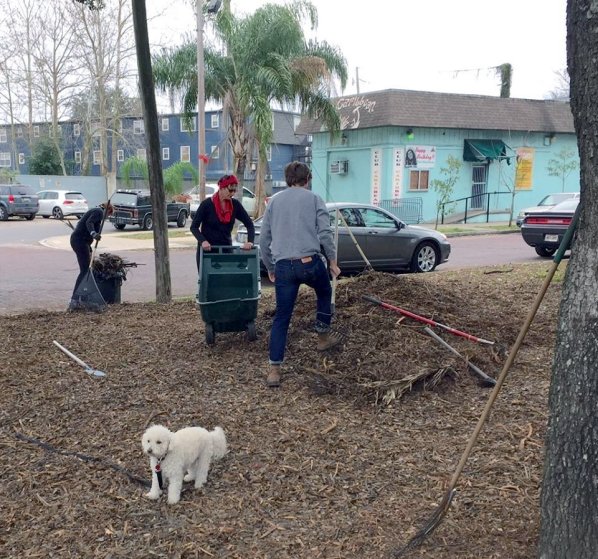 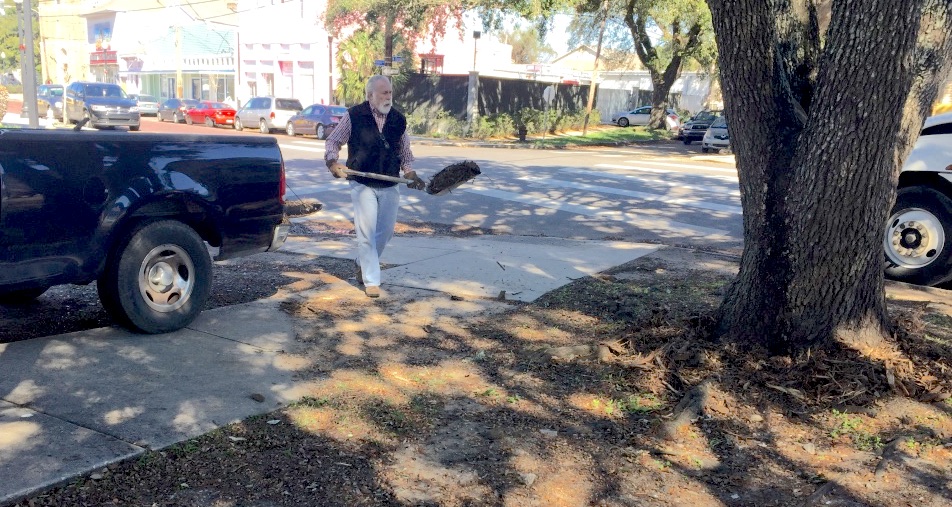 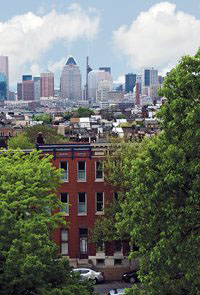 The city of Baltimore’s high crime rate inspired a gritty TV drama. But a new study (Tinyurl.com/TreeCrimeReport) by the University of Vermont’s Transportation Research Center, in Burlington, found that a 10 percent increase in trees in a given area led to a 12 percent decrease in crime. “It’s really pretty striking how strong this relationship is,” says Austin Troy, lead author of the study, published in the journal Landscape and Urban Planning.

Researchers examined the correlation in and around Baltimore using aggregated crime data and combining it with high-resolution satellite images to conduct the analysis. The working hypothesis is that because people enjoy spending time in pleasant outdoor spaces, there are more observers present to hinder criminal activity. Also, a well-maintained landscape seems to send a message that someone may be watching.

To avoid culture bias, the study considered many socioeconomic factors, including housing, age, income and race of residents, as well as variables such as rural versus city setting and population density. The findings should prove helpful to urban planners. 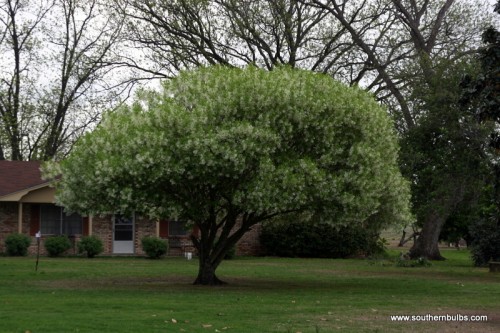 Fringetrees are excellent anywhere that a very small tree is needed, such as near a patio, in small yards, or under power lines. Like many white-flowered plants, they look especially nice planted in front of a dark backdrop. They can be used as individual specimens, in groups, in mixed shrub borders or in natural gardens. They are well suited to urban plantings due to pollution tolerance and adaptability to varied soils. Fringetrees are not salt tolerant.

Although fringetrees are adaptable and will grow in most soil types, they prefer moist, deep, well-drained, acidic soils. They grow well in full sun to partial shade. Leaf appearance is best in some shade, but flowering is heaviest in full sun. The ideal compromise would be sun through most of the day, but shade during hot afternoon hours. Fringetrees have low maintenance needs once established.

Due to a naturally strong branch structure fringetrees rarely need pruning. Pruning while young may be desirable if a single stem tree form is preferred. Fringetrees do not transplant well so take care to choose an appropriate permanent location and use proper planting methods. Plant it high, it won’t die!

Plant it Low, It Won’t Grow | Plant it High, It Won’t Die

For the most efficient use of water, construct an earthen berm two to three inches high around the drip zone area of the plant after planting. Water in well after planting!

TREES TO PLANT IN NEW ORLEANS 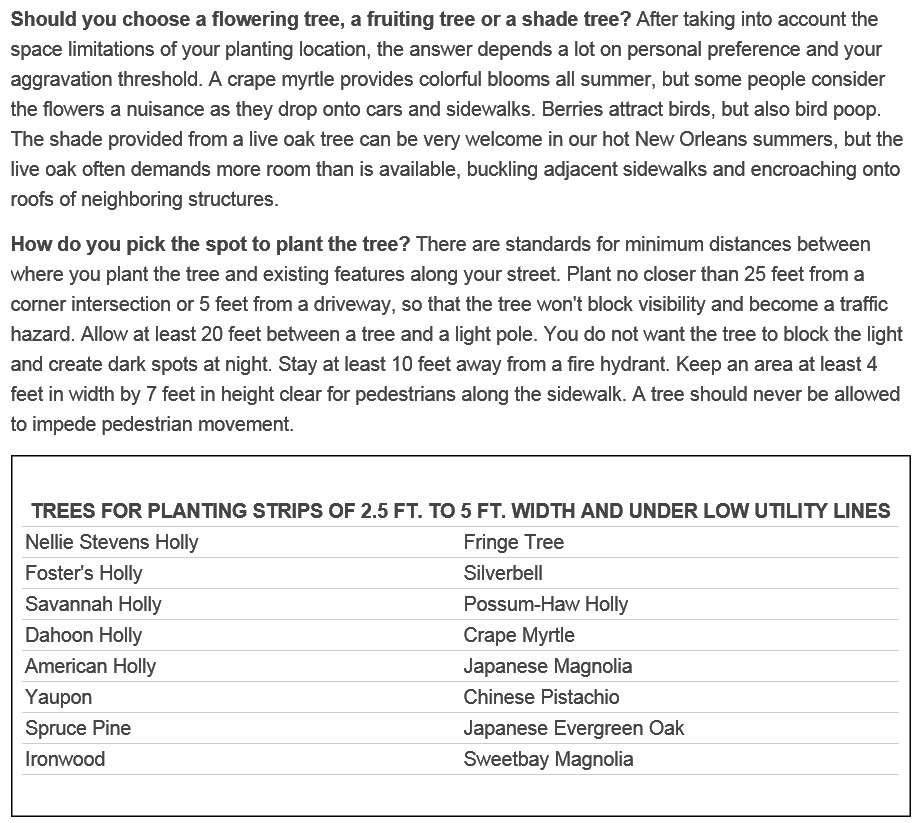