Zapp’s Potato Chips donated 12 cases for Faubourg St. John’s 2018 Feed the First Initiative. Many thanks to Zapp’s for once again helping to feed the officers of the 1st District during Mardi Gras! 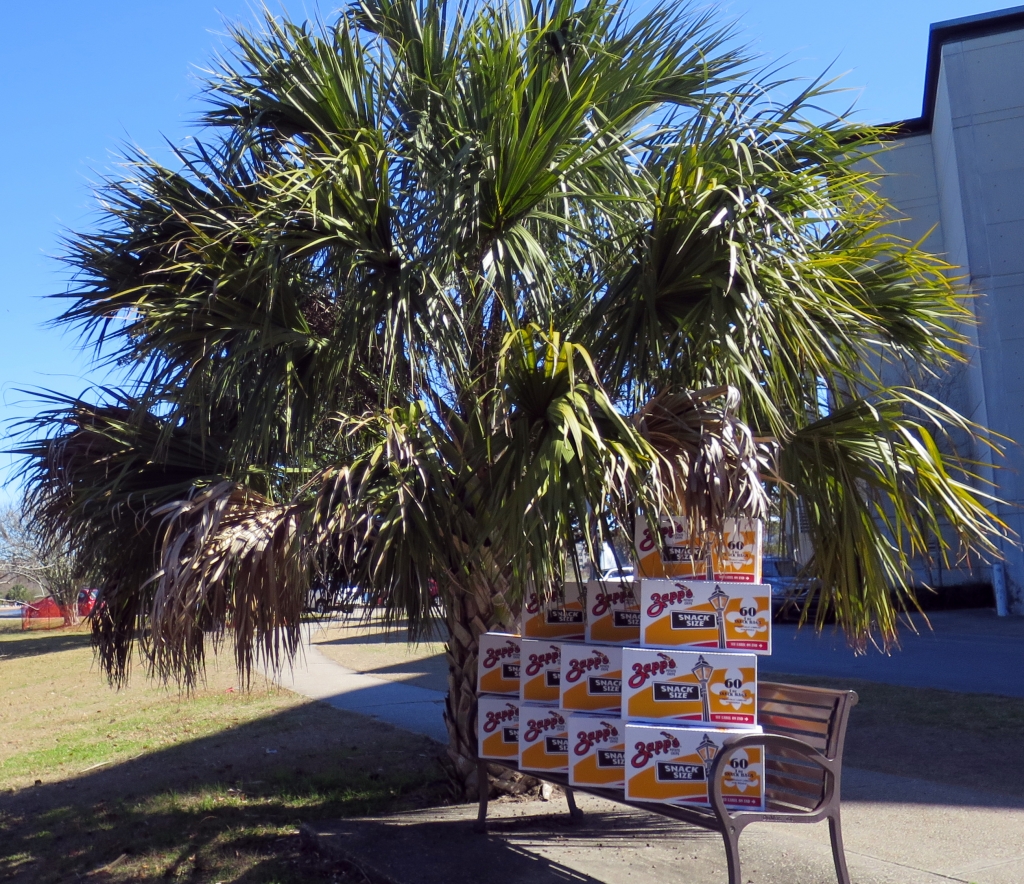 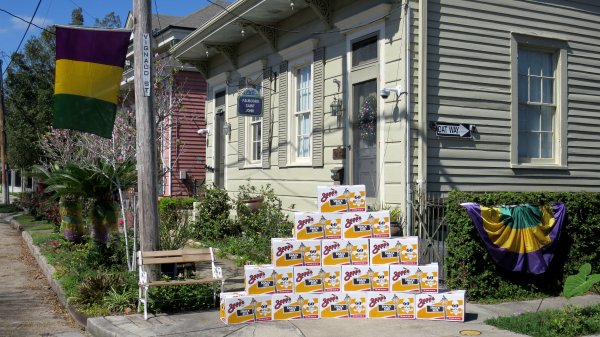 For the 9th year, the Faubourg St. John Neighborhood Association (FSJNA) will feed officers at the First District Police Station during Mardi Gras weekend from Saturday through Fat Tuesday. During that time, the officers all work 16 hour shifts to cover the parade routes and patrol our district.

We provide a hot breakfast and lunch along with snacks and soft drinks as a show of support to let them know it’s not just them against the world out there over that weekend (and all the time). This year, we will also provide pizza for the night shift so that they can feel the love too. 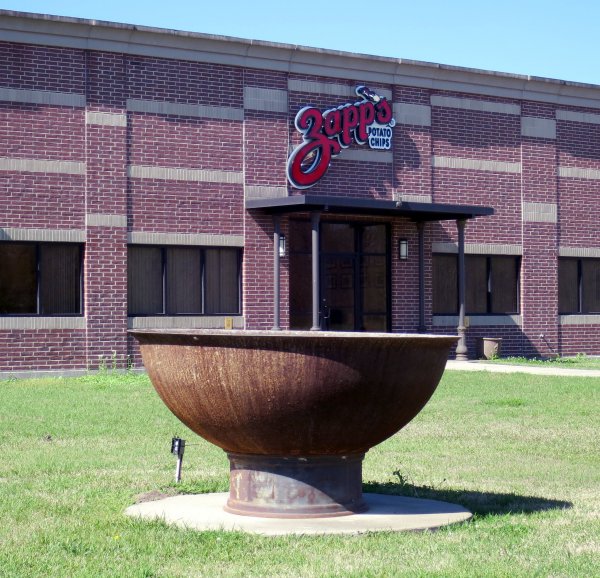 Today, Zapp’s Potato Chips donated 900 bags of their wildly popular chips to the Feed the First initiative. It’s donations like this and the many donations from generous neighbors that make this program possible. Many thanks to Zapp’s Potato Chips for their generous donation and kind hospitality at their plant in Gramercy, Louisiana. 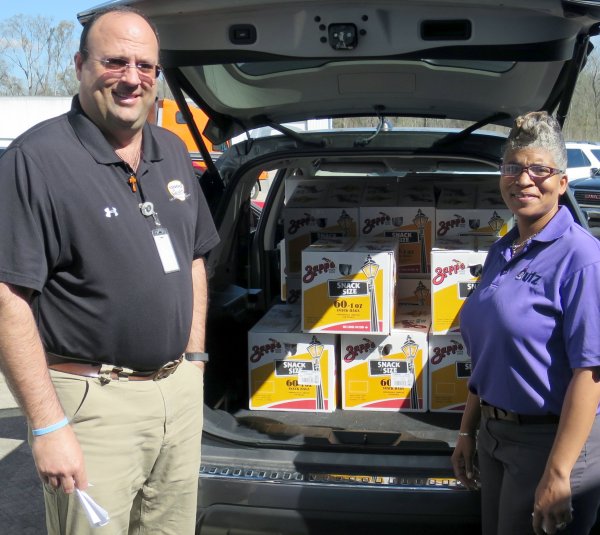 “A lot of the equipment we have is state-of-the-art, in some cases we were the first or second people in this country to have a certain piece of equipment,” says Gaudry.

Whats makes this salty, sometimes spicy snack we all love so unique is the variety of flavors. Voodoo has been the most popular chip since it was released. The name itself shows off the fun, quirky personality of Zapp’s Potato Chips.

“We want something that reflects the area here, the spiciness the depth of flavors,” says Gaudry.

Article below by Glen Abbott at NOLA.com

Here in the Big Easy, it’s all about the spice. From po-boys to potato chips, the proper seasoning is essential. So little wonder that our favorite chip comes in a variety of tastebud-tantalizing flavors, with imaginative names like Spicy Cajun Crawtator, Voodoo, and Cajun Dill Gator-Tators – along with the old standbys like Regular, Jalapeno, Salt and Vinegar, and Mesquite Bar-B-Que, among others. 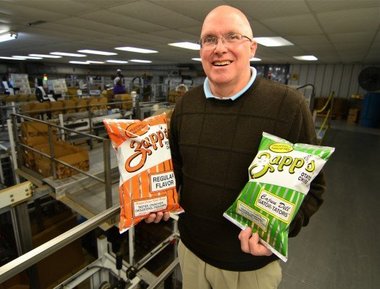 Zapp’s processes about 120,000 pounds of spuds and fries them in nearly 8,000 pounds of a peanut oil blend each day. The potatoes are sliced thicker than most chips and go right into the fryer.

“The key to that is you load all these wet potato slices [into the fryer] in less than a minute,” according to Olson. “That drops the temperature of the oil, and it’s that temperature drop that creates the curl, the crunch, and the flavor is basically from the peanut oil blend.”

“It’s the best-tasting chip made,” Olson claims. “And that’s the mouthfeel and the taste that derives from the peanut oil. And then the seasonings on them, none of them are cheap. They’re selected because they taste good, and as much as possible we try to have interesting flavor combinations.”

Ron Zappe founded Zapp’s Chips in 1985 after his oil-field equipment business tanked, along with the price of crude oil in the early ‘80s. He converted an empty car dealership in St. James Parish into a chippery, installing two small fryers and a packaging machine in the former showroom. Ron passed away in 2010, and Rod Olson – who started with the company its first year as the New Orleans distributor – became president.

At the beginning, Zapp’s produced only regular and jalapeno-flavored chips, but before long, Ron Zappe developed a recipe with spices reminiscent of a crawfish boil. He called the new flavor Spicy Cajun Crawtator, and today it’s one of the company’s best-selling varieties.

Over the years, the company has added flavors, some more popular than others.

“We did a Key Lime flavor … that was one of our most limited editions,” says Olson. “And twice we’ve done pizza flavors that just haven’t taken.”

But the company still gets requests for past favorites like Honey Mustard, Bacon and Cheddar, and even Sizzling Steak. And the newest limited edition – Baby Back Rib (!) – will be hitting store shelves this week.

Take my advice, and get thee to a chippery. Zapp’s doesn’t offer public factory tours, but you can buy the chips throughout Louisiana, and in Texas, Mississippi, Alabama and the Florida panhandle, as well as online and through mail order.

Or head to a parade this Carnival season — Zapp’s chips joined the list of edible throws in 1991, when the Krewe of Mid-City first tossed them in 1-ounce bags stamps with the krewe’s name. Other krewes have joined suit, and Zapp’s makes purple-and-gold bags for the season.