Since the beginning, the Bayou Boogaloo, held on the banks of Bayou St. John in New Orleans during May, has had a mission to give back to the community. The first Bayou Boogaloo in 2006 was a healing effort for the community. Many folks were still rebuilding their lives and their houses after “the storm”. The Bayou Boogaloo was a welcome respite from the daily grind. It provided much needed fun for both adults and children.

One of the often forgotten aspects of the Bayou Boogaloo is its emphasis on zero impact on the environment. I’ve personally witnessed the meticulous cleanup after the event. One would never know the music festival ever took place because the area is left as clean or cleaner than it was before the event.

The Bayou Boogaloo gives back in other ways too! The event helps neighborhood organizations raise funds for their operations, has helped build playgrounds, has supported community sports initiatives, helped plant native habitat-building and erosion-preventing marsh grasses, and replaced trees lost during hurricanes.

The City even recognized the Bayou Boogaloo’s founder, Jared Zeller, with a proclamation for promoting an economically and environmentally sustainable event.

It’s been less than three weeks since the last notes rang out at the Fair Grounds to close the 2016 edition of the New Orleans Jazz & Heritage Festival. Not far away, bands will strike up again at the 11th Annual Mid-City Bayou Boogaloo. The free event is presented from Friday, May 20 to Sunday, May 22, 2016 along the banks of Bayou St. John between Dumaine Street and N. Jefferson Davis Parkway. It features three main music stages at Dumaine Street, Orleans Avenue and Lafitte Street plus a Kids Stage that has both music and other activities to please the youngsters.

There are some excellent local and national headliners at the festival that didn’t perform at this year’s Jazz Fest including Nolatet (Sunday, 6 p.m.), The Lowrider Band (Saturday, 7:45 p.m.) and the Wailers (Friday, 7:45 p.m.).

Let’s start with Nolatet, a band of all-star jazz masters – drummer Johnny Vidacovich, bassist James Singleton, vibraphonist/percussionist Mike Dillon and pianist Brian Haas. This performance marks the first time many local people will have the opportunity to experience this group as they’ve only performed in New Orleans several times. Formed spontaneously in 2014 and quickly releasing its exciting debut album, Dogs (The Royal Potato Family) just this year, Nolatet has been out on tour promoting the CD and, according to Vidacovich, has been very well-received. “They liked it a lot – a lot more than I imagined,” he is quoted in OffBeat magazine. “I thought the music would be a little too orchestral. There’s a lot of things that we’re doing that are just out of the norm.”

“I can tell you what it sounds like to me sometimes when I’m involved with the music and my head is spinning,” he continued. “It reminds me of a circus and a Christmas tree with a lot of lights.”

Because pianist Haas, unlike the other members, doesn’t live in New Orleans, Nolatet is a get-it-while-you can band though all concerned express their hope and intent to do much more in the future.

Just an aside – it’s great to have Dillon, who absolutely floored the crowd at last year’s performance of his New Orleans Punk Rock Percussion Consortium – back at Bayou Boogaloo. Hopefully, the Consortium, an amazing collection of rhythm masters will return next year or be booked somewhere else soon.

The Lowrider Band, which partly due to the presence of one-time Crescent City resident, drummer Harold Brown, feels almost like its from New Orleans. It’s also got that funk and street band attitude that music lovers here can really relate to. The last time the Lowriders performed in New Orleans was in 2009 at a benefit for the Save Charity Hospital organization. Now that’s awhile ago…

The band is, of course, made up of original members of the group War, including Brown, the great harmonica player Lee Oskar, guitarist Howard Scott and bassist B.B. Dickerson, who, because of health issues will be unable to perform with his fellow Lowriders. Due to a court order, nobody in the group is allowed to mention their participation in War in any promotional material or advertisements. Fortunately, these talents have been able to retain their rights to their compositions and receive royalties.

“Here’s how we say it,” Brown explained. “We are the original composers of and performers on ‘Why Can’t We Be Friends?,’ ‘The Cisco Kid,’ ‘The World is a Ghetto,’ and ‘All Day Music.’ All our friends know the Lowriders. Everybody knows exactly who we are.”

“When we come to play in New Orleans it’s like playing at home in our living room,” Brown once proclaimed. “You can drop all of your big shot attitudes. In New Orleans they want to know about your soul – your spirit. I tell people when they come into the city, to turn off the radio and roll down the windows.”

The socially conscious messages of tunes like Bob Marley’s “One Love” are much needed in today’s world. The Wailers keep that warmth, the much-loved classic songs and laid-back reggae riddims alive. Bassist Aston “Family Man” Barrett is the only member of the touring band that performed and recorded with the group that backed the late, legendary Bob Marley who influenced the world with the magic of his music and his pen. Barrett was the heartbeat of the rock steady beat, the sound that could be felt to one’s core. Reggae by the Bayou seems so right.

Parents might want to bring their children to the Kids Stage on Saturday at 1:30 p.m. where Daria Dzurik, the leader/steel pan player/vocalist of Daria & The Hip Drops fame will hold a percussion workshop. With her talent, lively personality and big smile, Dzurik has the qualities to educate and entertain the whole family. She and the Hip Drops certainly caught the crowd at this year’s French Quarter Festival.

On Friday, the music schedule is abbreviated and begins in the evening on two stages starting at 5 p.m. The Wailers, which hit the stage at 7:45 p.m. close it down. On Saturday and Sunday the music gets going at 11 a.m. Naturally there are food and beverage vendors aplenty and arts and crafts booths from one end of the fest to the other.

One of the beauties of the festival remains its wonderful setting and just being able to sit along Bayou St. John and relax.

This article originally published in the May 16, 2016 print edition of The Louisiana Weekly newspaper.

Here in New Orleans there are so many things to be thankful for.
We have great food and great fun but most of all, great people.
Click on any postcard for photo credit. 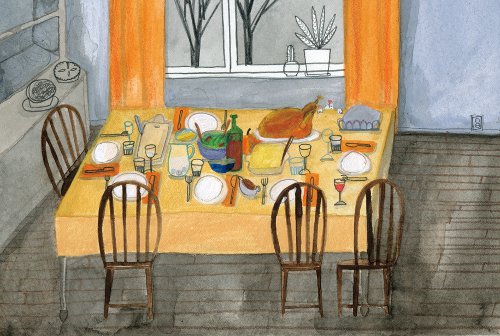 Placement of the asphalt portion of the Lafitte Greenway bicycle and pedestrian path is now 75% complete in Areas 2, 3, 4, and 5. The Department of Public Works construction contractor, Durr Heavy Construction, has completed installing most of the trail lighting fixtures in Areas 2, 3, and 4, and continues installation of trail lighting in Area 5. Lighting wiring will be installed toward the end of the project construction, when the project is ready for public use.

Please note the N. Lopez St. pedestrian bridge is closed and will remain closed for the duration of construction in Area 3.

Conversion of St. Louis St. between N. Carrollton Ave. and N. Solomon St., from two-way directional traffic to one-way traffic in the lakebound direction is now scheduled to begin in December. Crews will mobilize to this portion of roadway in mid-December.

The overall project is about 62 percent complete and on schedule to be open in spring 2015.

Durr staff will be home with their families on Thursday, Nov. 27 and Friday, Nov. 28, resuming work on Monday, Dec. 1.

Thank you for your continued patience. 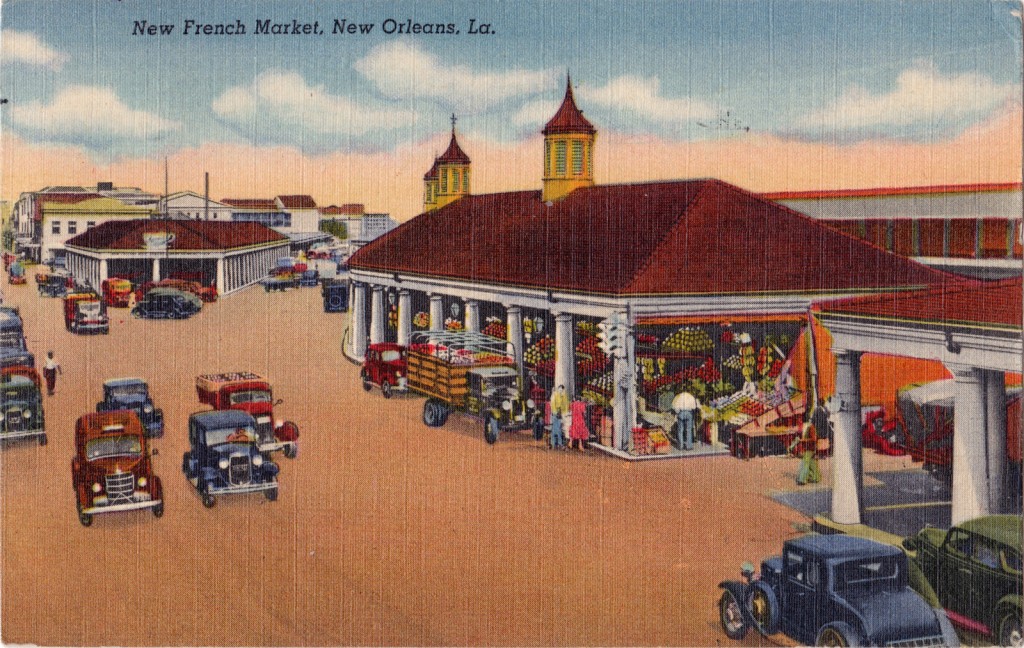 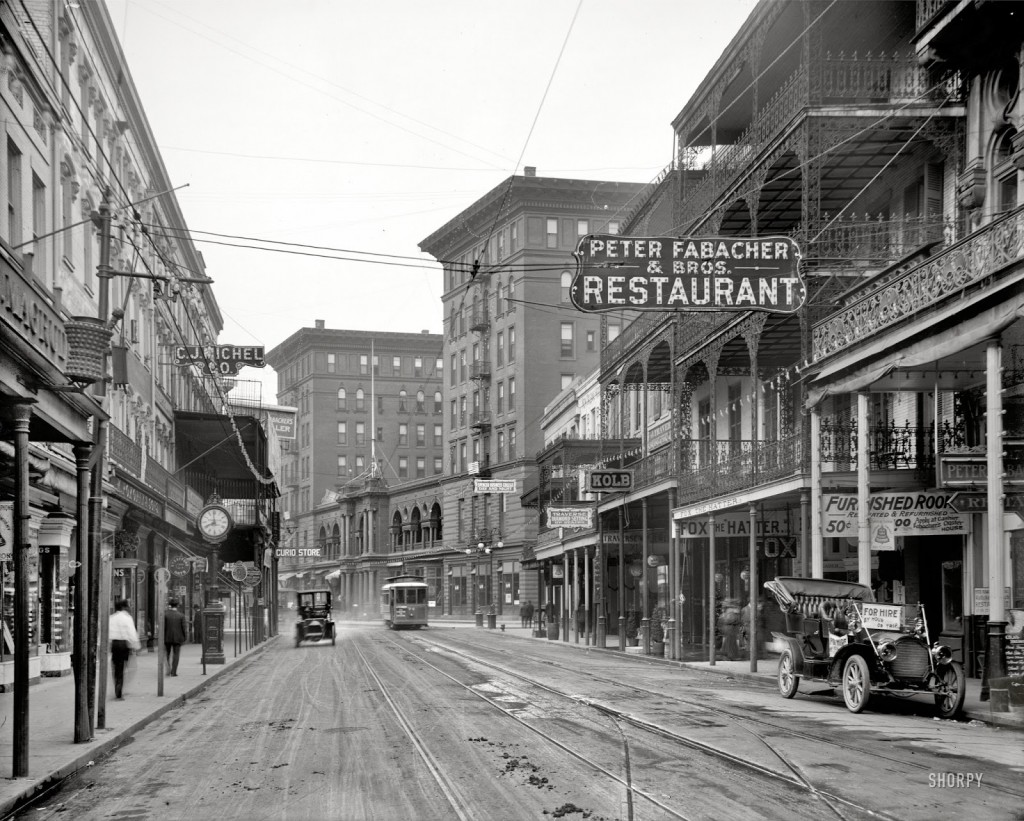 Here in New Orleans there are so many things to be thankful for. We have great food, great fun but most of all, great people.

You’ll love the thrilling rides,
laugh till you split your sides,
at.., Pontchartrain Beach”. 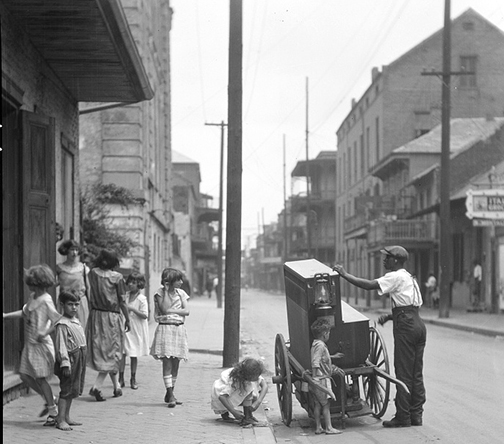 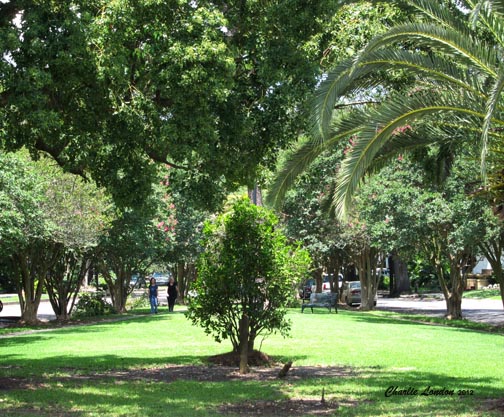 Kennedy Park is on Ursulines Avenue between North Lopez and North Rendon. 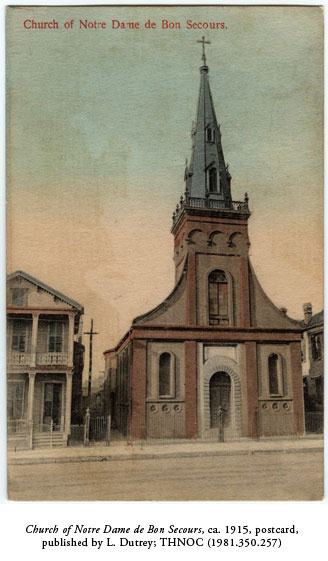 This postcard is from the Historic New Orleans Collection:

“This postcard is for Patricia, who requested images of the church of Notre Dame de Bon Secours on Jackson Ave. One of the three churches of the Irish Channel, Notre Dame was built by French residents and was demolished in 1925 after it was heavily damaged in a 1918 hurricane.” 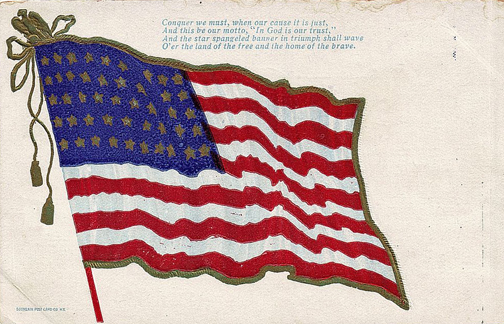 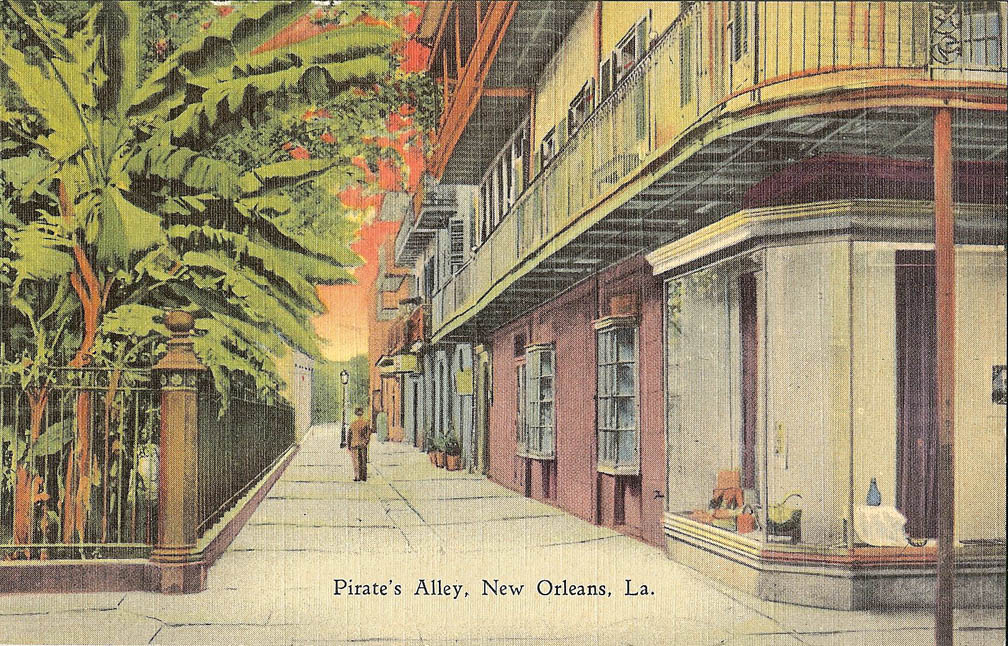 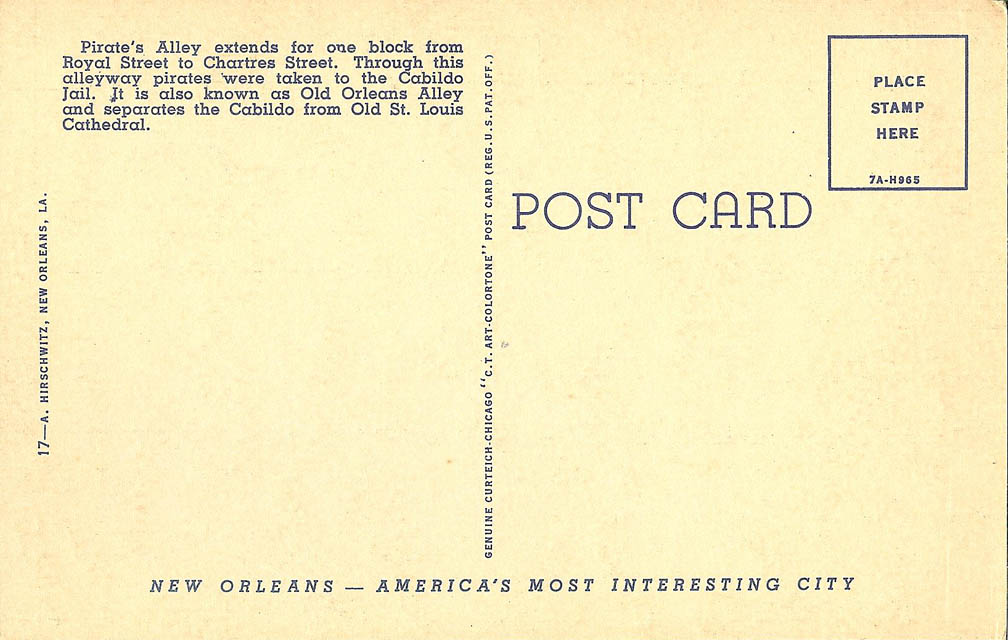 Conrad says, “Ro and I moved from our 3000+ sq ft home earlier this year. We have been able to donate much stuff to Goodwill, friends and family. However, there remain boxes of stuff to go through, mostly of Ro’s Bristow family. The postcards were the property of her late father, Dr. Louis Bristow, who was the former head radiologist of Baptist Hospital. He was a collector of many things, and went on a 1928 expedition to the Mayan Yucatan, with Dr. Franz Blom, the famous Tulane Archeologist ( http://en.wikipedia.org/wiki/Frans_Blom ).”

Many thanks to Conrad Abadie for allowing his postcard collection to be scanned and presented here. 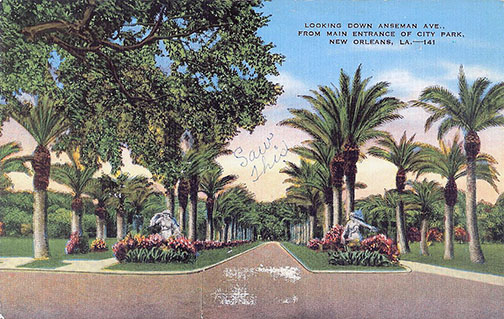 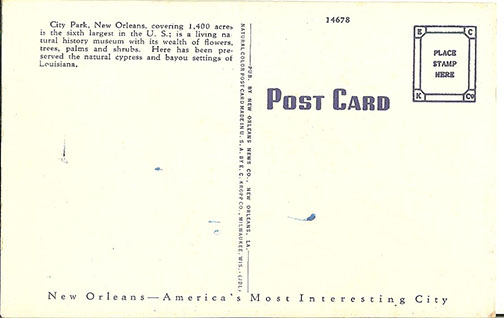