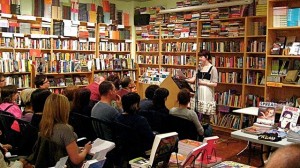 Ben Pelhan, Ben Kopel and Anne Marie Rooney co-host the DIANE Tapes, a new reading series at the Maple Street books on Ponce de Leon. They meet one Friday each month, and have 3 readers of poetry and/or fiction perform. 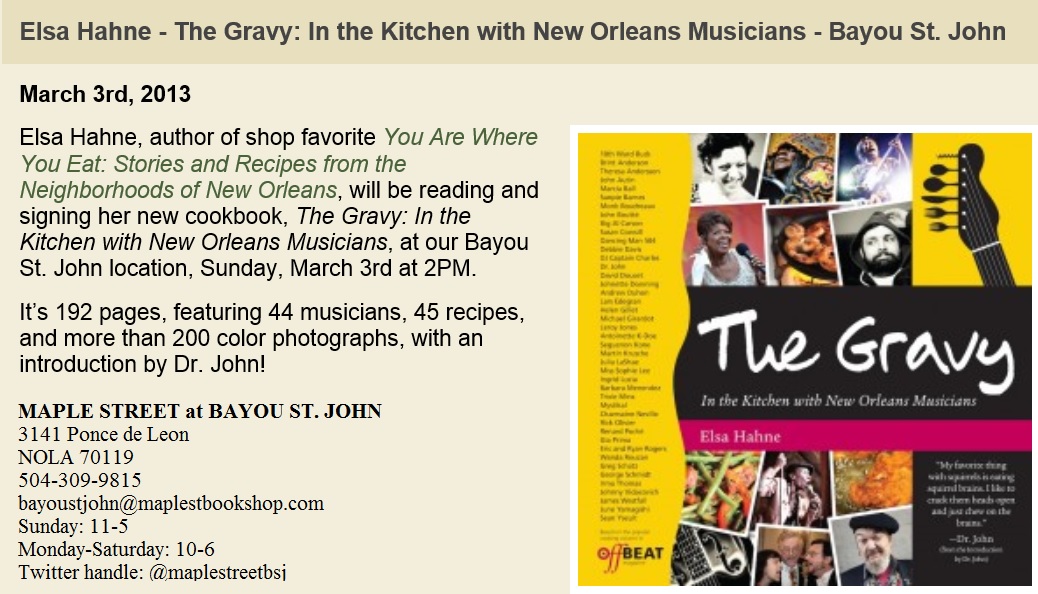 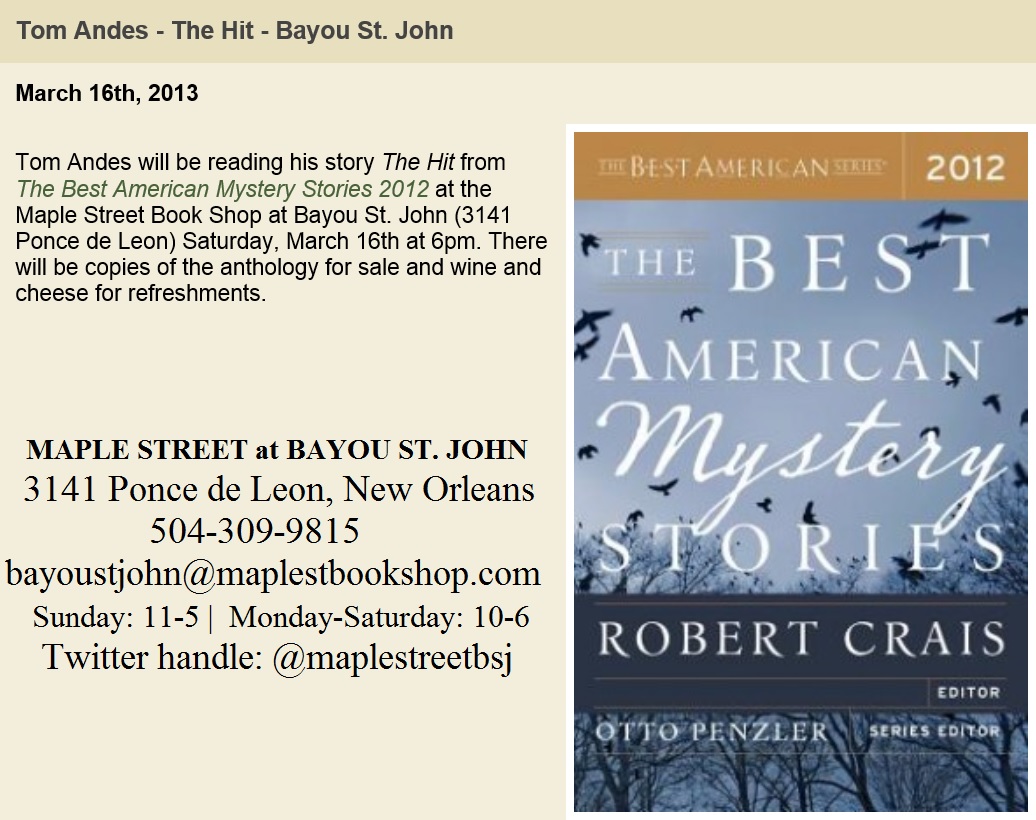 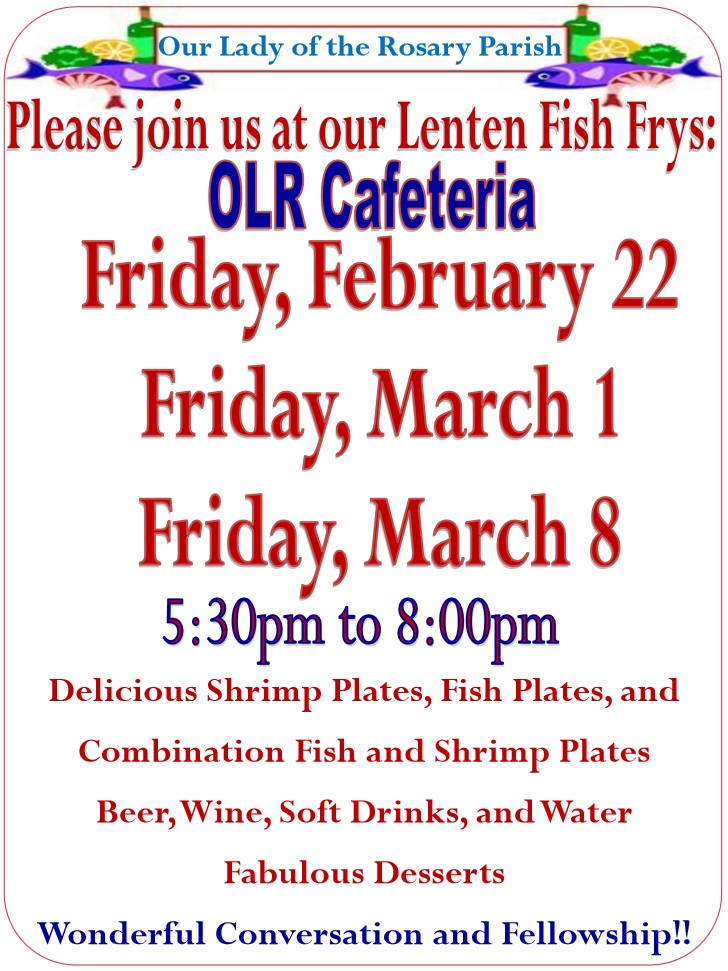 Although Holy Rosary Parish officially began in 1907, the history of the parish began as early as the settlement of Bayou St. John and City Park (Allard Plantation) area. The historic waterway, discovered by Iberville in 1699, served as a passage from the Gulf to Lake Pontchartrain. Soon the Spanish missionaries came to settle Louisiana. At the mouth of the Bayou, a resort called Spanish Fort was constructed.

Along the upper side of the Bayou was the Allard Plantation which, in the mid-1800’s became New Orleans City Park. On the opposite side, a number of fine homes were constructed as was the Fair Grounds. The present Holy Rosary property was originally part of a large tract of land that extended to Gentilly Boulevard. It was sold by Joseph Chalon and his wife, in 1871, to Don Andres Almonester y Roxas, the builder of the St. Louis Cathedral, who constructed a home for himself. Almonaster sold the land to Louis Blanc in 1792 and in 1799, it was acquired by Don Nicolas Maria Vidal, lieutenant governor of the Louisiana Colony. The land finally was purchased by Evariste Blanc and it remained in the Blanc and Denegre family until 1905.

Many fine homes were constructed in the area including the Spanish Custom House (now the residence of Vincent Saia), the Judge Tissot home and the Cucullu home. In 1855, Esplanade Avenue was opened to the Bayou on land obtained from the Blanc family. In 1856, St. Louis Cemetery was established on the site of the Old Bayou Cemetery originally founded by the City in 1835.

Soon after the Civil War, the Fair Grounds was established and the beautiful Gallier home became the Louisiana Jockey Club. A burial ground for Civil War soldiers was established by Governor Nicholls in 1883. In 1861, a horse-drawn car line was established with a car barn on Desmare playground next to the present Cabrini High School property.

As the area around Faubourg St. John and Grand Route St. John steadily developed, a call went out from residents for a parish church. The area originally was part of the distant St.Ann Parish but the distance was excessive for the residents to travel.

Mrs. Fanny Labatut Blanc offered a piece of ground in 1855 for the erection of a parish church, along with 300,00 bricks. The act of donation was passed in 1855 before Notary Octave de Armas. A small cottage on the property became the Church of the Nativity of the Blessed Virgin Mary. Father Maistre, the first pastor, deemed that the formation of the church was impractical and he went on to form St. Rose de Lima parish of which the parochial territory of Holy Rosary remained part of until 1907.

In 1904, Mother Frances Xavier Cabrini, who would later become America’s first canonized saint, trudged down the Esplanade looking for the ideal piece of land to construct an orphanage. In 1906, with the help of Captain Salvator Pizzati, Mother Cabrini constructed the Sacred Heart Orphanage. This project escalated the founding of Holy Rosary Parish. Also, the Denegre family was pressing the Archbishop to fulfill the commitment and construct a church as agreed, or else the land should revert back to the family.

In 1907, Archbishop Blenk took the long-awaited action and appointed Rev. William J. Vincent to build a new parish to be called Our Lady of the Holy Rosary. On December 25, 1907, the first mass was celebrated at midnight in the old home. According to newspaper accounts, Archbishop Blenk officiated at the mass. Mrs. Denegre did not live to see the final church building as she passed away on September 12, 1910 at the age of 93.

Although the first mass was celebrated in the home as Mrs. Denegre had wished, a small chapel was completed in January of 1908. As the new parish grew, a school was needed. While the chapel remained overloaded, especially during the period following the fire that destroyed St. Rose of Lima, other parish needs took precedence over the construction of a new church. It was not until 1924 that construction of the permanent church was begun. On Sunday, November 22, 1925, the new church was finally dedicated. Father Vincent died in November of 1934, having taken the parish from its humble beginnings to a fully developed congregation with a school, church, societies and a strong Parish spirit. It was found that Father Vincent had personally financed a modest part of the parish works.

Father Vincent was followed by Msgr. Francis Canon Racine and Bishop L. Abel Caillouet who contributed to the strong growth and parish spirit. Today, Our Lady of the Holy Rosary Parish remains a strong bastion of faith in the Archdiocese. 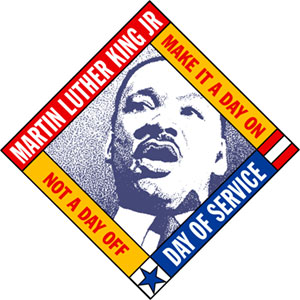 You can make a difference by getting involved one community at a time.. VOLUNTEER at the Harambee-Dumaine Community Garden of New Orleans. Laini Kuumba Ngoma Troupe, Inc. is hosting a Community Clean Up Day & Harambe-Dumaine Garden Work Day at 2720 Dumaine Street in New Orleans. 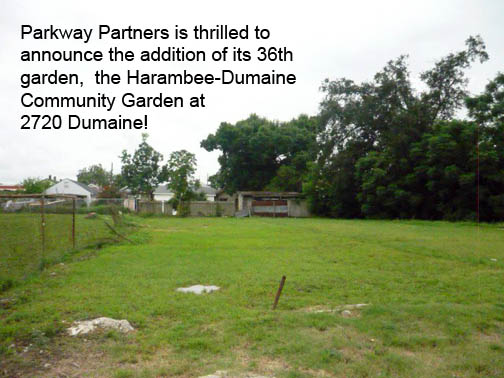 Faubourg St. John will soon have another
Community Garden at 2720 Dumaine Street.

Parkway Partners’ Urban Gardening Program includes Urban Farms, Community Gardens and Orchards, and some gardens may incorporate all of the above. The type of garden that is created is up to the community of people who are working the land.

Whether a garden is strictly a Community Garden or an Urban Farm that produces food that is sold at market, each of our gardens is positively affecting the community around it through food production, food desert eradication, community building and beautification.

Parkway Partners does emphasize “community first” in our work with urban gardens. Thus, in order to become an affiliated Parkway Partners Garden you must first demonstrate that the community wants, and will support the proposed garden. All gardens are a lot of work and we want to make sure that the land is going to be cared for.

The use of our greenhouse to start seeds, which includes the use of any seeds we may have on hand, trays and pots, and soil. We ask in return that you donate a percentage of your starts for us to circulate to our Schoolyard Gardens or Second Saturday programs.

Tools for borrowing: from wheel barrows to tillers and shovels, we loan our tools to affiliated Parkway Partners Urban and Schoolyard Gardens. We provide checkout guidelines.
Assistance rounding up volunteers- ranging from large groups to individuals
Connections to suppliers – we often receive calls from people with extra mulch, chicken feed, plants, etc., and we link that resource to our gardeners

Grant writing partnerships | Acting as your fiduciary agent
Promotion of any upcoming events on our website, newsletter and facebook page
We are a grant and donation funded non-profit organization. There are no fees whatsoever to become a Parkway Partners Garden. If you are an existing Parkway Partners Garden, please stay in touch and let us know how you are doing. We are better able to support you if we know your needs.

While we encourage sustainable methods of fertilization, pest control, rainwater harvesting, composting and soil building, it is up to the individual farms and gardens as to what they grow, and how they grow it.

Please let Parkway Partners know if you are interested in starting an Urban Garden. They are happy to speak with you and help you begin the process.

You can contact Susannah Burley, Program Director of Urban Gardens, Schoolyard Gardens and ReLeaf at: sburley@parkwaypartnersnola.org or 504 620 2224, ext 4.

photos and comments by Charlie London 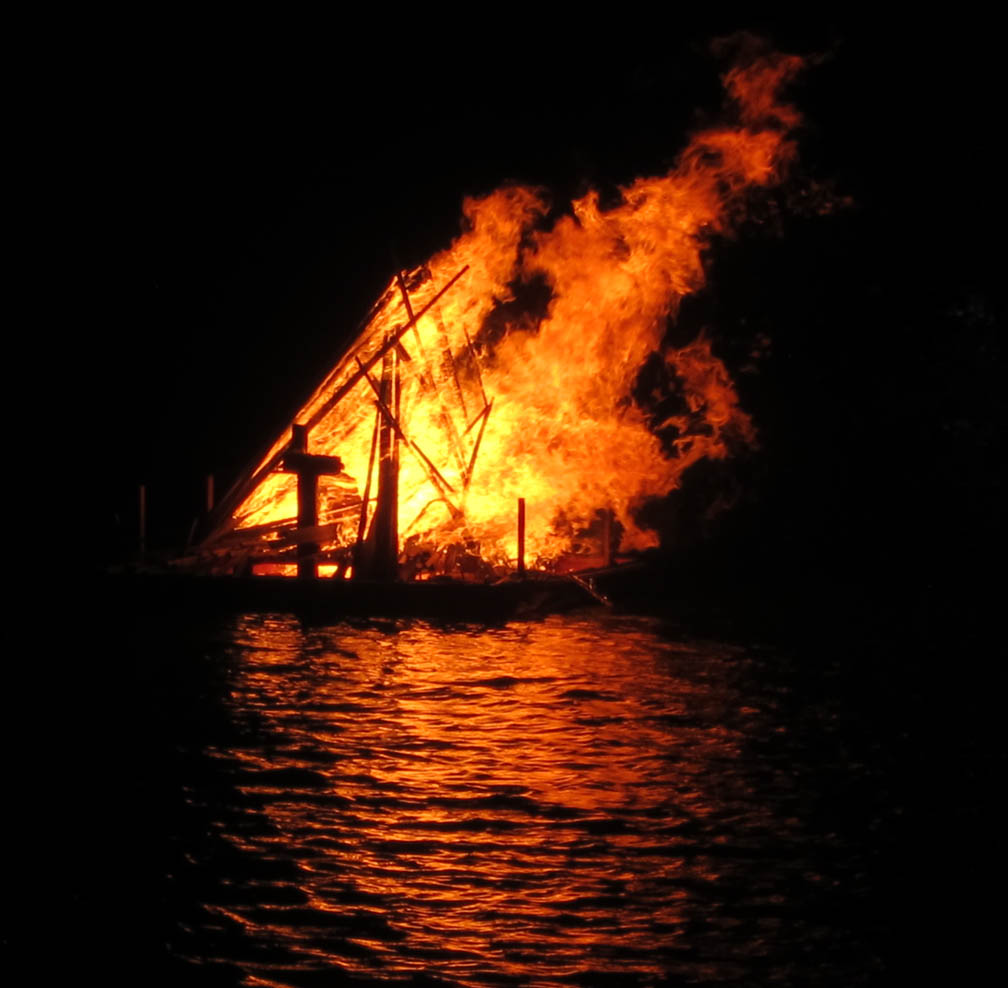 An attempt was made during the 2012 New Year celebration to have a floating platform of fire float out on the bayou. That attempt quickly ended as the platform sunk to the bottom of the bayou. 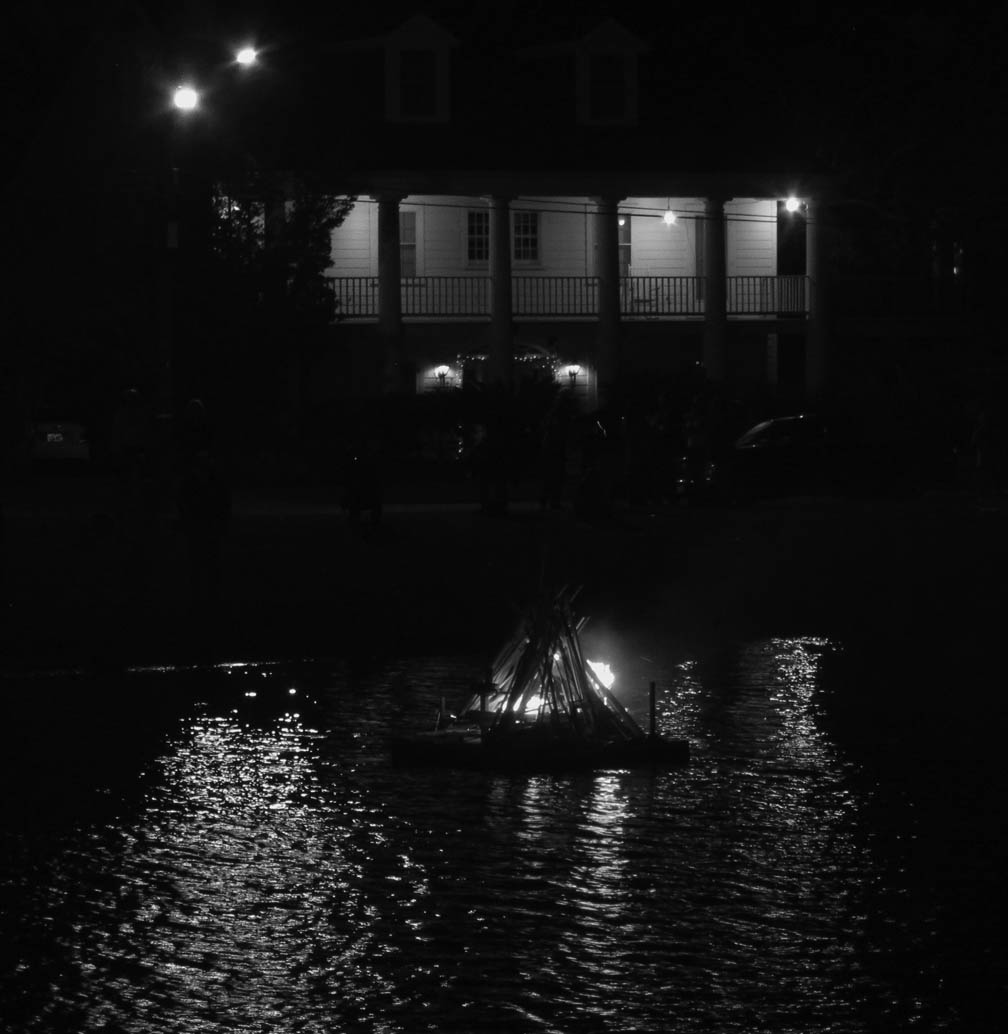 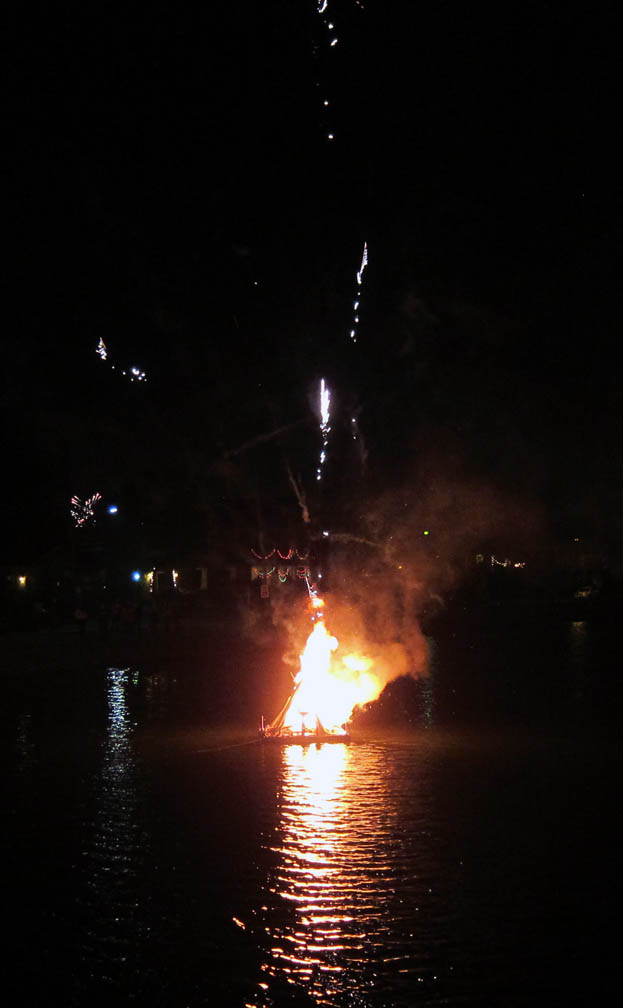 The 2013 attempt was different. It appears that more thought and planning went into the effort. The fire burned for quite some time and there were timed fireworks that shot out at different intervals as the fire floated across the bayou.

The platform was tethered so it could be removed from the bayou. No one was injured but the safety of an open fire in an urban environment is certainly questionable.

Fireworks and the fire on the bayou are illegal in Orleans Parish. 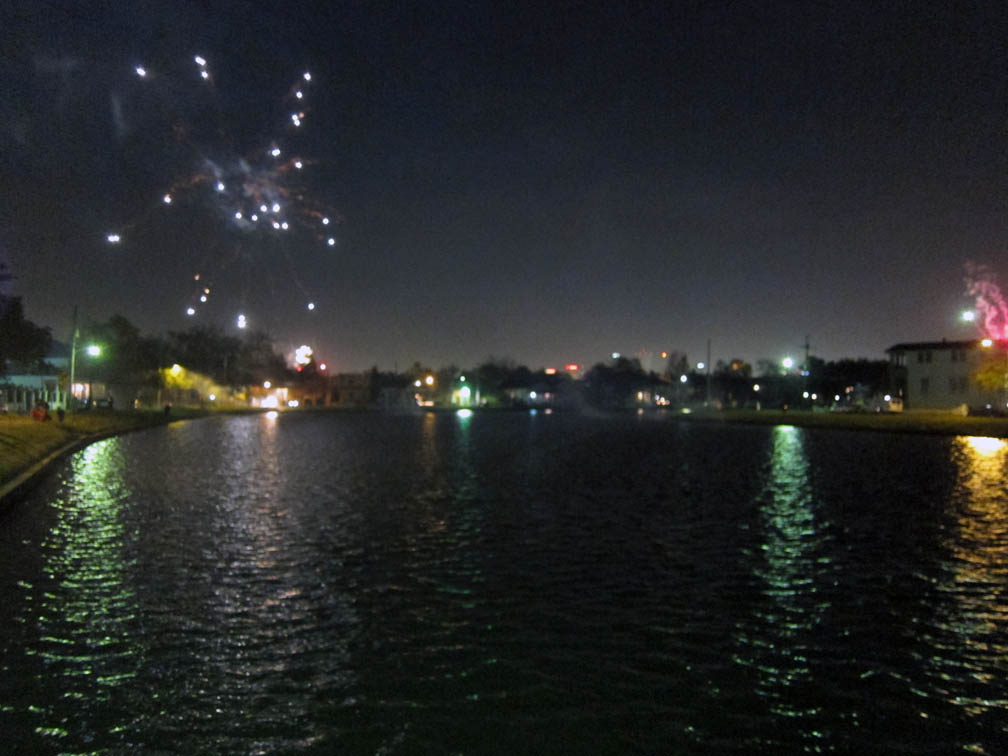 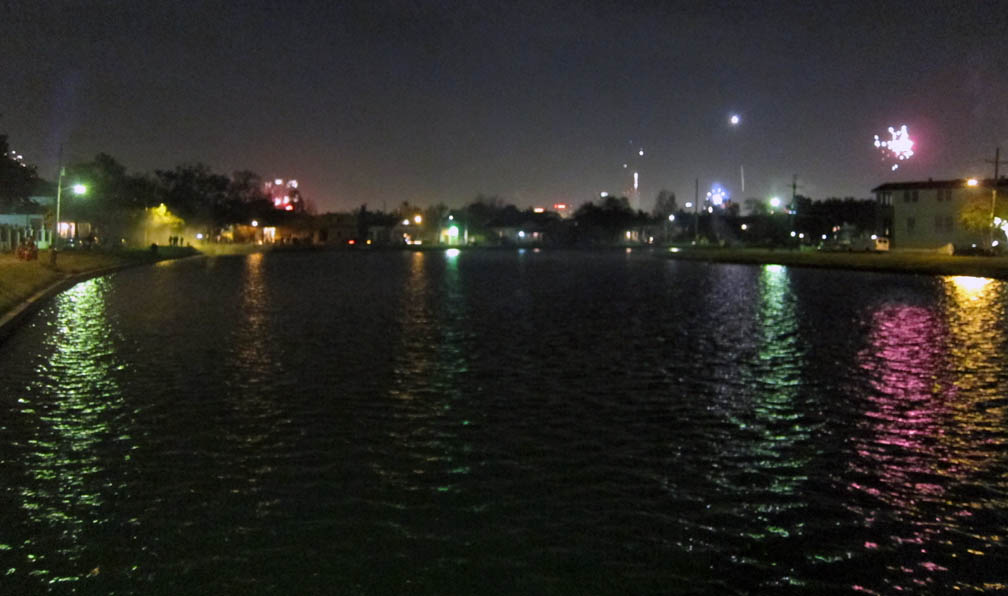