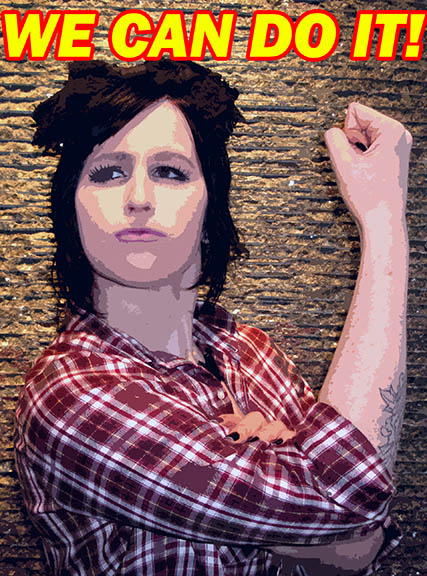 Can you think of a project in Faubourg St. John that you would like to make happen?

The great neighbors of Faubourg St. John are known for getting things done.

But, we can’t do it alone. Community sweat equity is important but money is the deciding factor on many projects.

Desmare Playground is an area in Faubourg St. John that could use some improvement.

How can we make that happen?

You have a voice in how your tax money is spent. Mayor Mitch Landrieu has announced a series of community meetings in each council district to discuss 2014 budget priorities. For more information about participatory budgeting along with where and when you can attend, please visit the link below:
https://fsjna.org/2013/08/participatory-budgeting/

Other neighborhoods will be presenting their needs/ideas at the city’s budget meetings. Unless we show up en masse to demand proper funding for Desmare Playground then our needs/ideas will get lost in the shuffle.

The meeting for District A is being held in Lakeview which has a very strong neighborhood organization. Unless you make it a point to attend and support the needs/ideas of Faubourg St. John your tax dollars will go to other worthy projects elsewhere.

YOU CAN MAKE A DIFFERENCE! 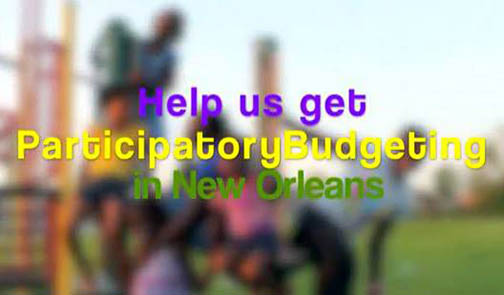 Participatory Budgeting (PB) is a democratic process in which community members directly decide how to spend part of a public budget. It gives ordinary people real power over real money, letting them work with government to make the budget decisions that affect their lives.

Re-Inventing Democracy Through Participatory Budgeting from meerkatmedia on Vimeo.

You can take a look at the 2013 City of New Orleans budget by clicking HERE.

Mayor Mitch Landrieu has announced a series of community meetings in each council district to discuss 2014 budget priorities beginning with District C on Tuesday, August 13. These meetings are designed to gather input as part of the Budgeting for Outcomes process.

“We’re committed to producing results for our citizens and sticking to our budgeting principles- cut smart, reorganize, and invest in the future,” said Mayor Mitch Landrieu, “The community meetings allow citizens to tell us their priorities for the budget.”

The Mayor will host one meeting with the district councilmember in each council district. The Mayor and Councilmembers will be joined by Deputy Mayors, NOPD Superintendent Ronal Serpas, NOFD Superintendent Tim McConnell and department and agency heads.

All community meetings will start at 6:00 p.m. Prior to the meeting, from 5:30 -6:00 p.m., the City will host a Resource Center with representatives from several City departments and agencies. During that time, citizens will have the opportunity to talk one-on-one with various departments about programs, initiatives and specific concerns.

The following lists community meetings in order of date: 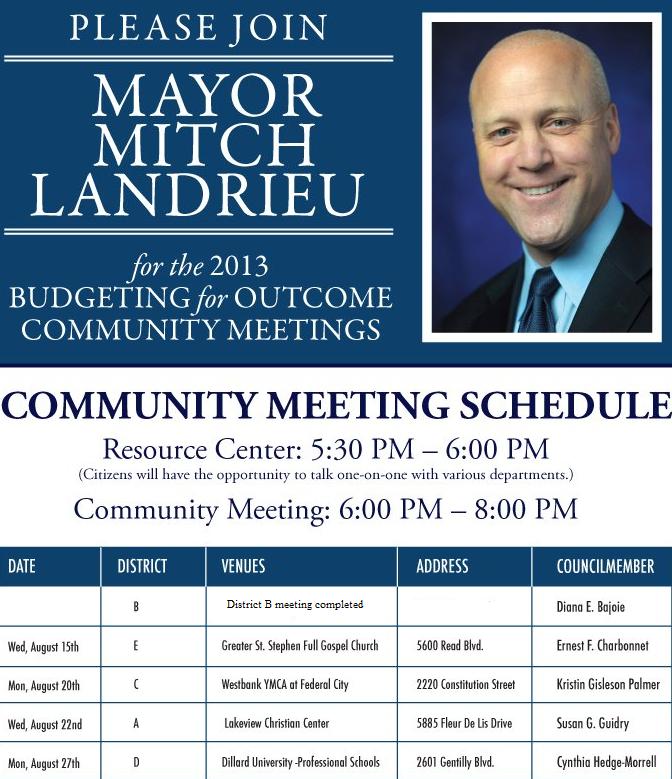 The District A Community Meeting
will be held at the Lakeview Christian Center
at 5885 Fleur de Lis Drive
on Wednesday, August 22nd at 6 p.m.

It’s that time of year again. Budget season is upon us, and I’m
asking for your help and input as we put together the 2013 budget
proposal. This year, we will host a series of community meetings in
each district as part of the Budgeting for Outcomes process. These
community meetings allow us to hear directly from you on what your
budget priorities are. We’re commited to producing results and
sticking to to our budgeting principles- cut smart, reorganize, and
invest in the future.

We will host one meeting with the district councilmember in each
council district. Deputy Mayors, NOPD Superintendent Ronal Serpas,
NOFD Superintendent Charles Parent and department and agency heads
will join me at these meetings.

All meetings will start at 6:00pm. Prior to the meeting, from
5:30-6pm, the City will host a Resource Center with representatives
from several City departments and agencies. During that time,
citizens will have the opportunity to talk one-on-one with various
departments about programs, initiatives and specific complaints and
concerns.
Check out the full list of meetings below to find out when your
specific meeting is. I hope to see you there.

New Orleans, LA – December 1, 2011 – Today, the New Orleans City Council adopted the 2012 Capital and Operating Budgets for the City of New Orleans. In other business, the Council by resolution requested that the federal government continue investment in streetcar service in New Orleans. The Council also heard a presentation from the Director of the New Orleans Museum of Art about NOMA’s upcoming centennial celebration. And, the Council commended the heroic life-saving efforts of a New Orleans firefighter and recognized the Urban Search and Rescue Squad for its response in the aftermath of the Tuscaloosa, Alabama tornadoes.

The Council revised the original proposed budget with passage of a series of budget amendments that restored and shifted allocations for the District Attorney, the Juvenile Courts, the Criminal Sheriff, the Office of the Public Defender, the City Planning Commission (CPC) and the New Orleans Police Department (NOPD), among others.

Council President Clarkson said, “As is the Council’s legislative responsibility, the City budget is balanced. It’s been a privilege and a pleasure to chair a budget process that resulted in a structurally sound budget with a consensus among our council members and the administration to meet the priorities of our constituents. The Council is committed to advancing its vision for the City in 2012 and supporting the programs, initiatives and projects funded in this document that will have lasting benefits for the future of New Orleans.”

The Council passed Resolution R-11-568 by Councilmembers Gisleson Palmer and Head to support the City of New Orleans and Regional Transit Authority’s submission of an application for Phase III of the Transportation Investment Generating Economic Recovery (TIGER III) funding for the Ninth Ward Streetcar Extension and Howard Avenue Connection Project. The resolution asks the federal government to continue investment in streetcar service in New Orleans. Streetcar service provides green and sustainable transportation alternatives and dramatically impacts the economies of the neighborhoods that are served.

District “C” Councilmember Gisleson Palmer said, “The revitalization of the St. Claude commercial corridor with a new streetcar line from Elysian Fields to Poland Avenue funded with federal transportation investment generating funding embodies the purpose of this federal grant. The extension of streetcar service down St. Claude Avenue is a vital linchpin to the comeback of important and historic New Orleans neighborhoods.”

District “E” Councilmember Johnson said, “Extension of the streetcar line into the Ninth Ward through this grant opportunity will result in increased ridership and an improved quality of life for citizens. The community will be well-served and a public service that had been utilized and enjoyed by this community for many decades would be restored.”

Commemorated Centennial Year of the New Orleans Museum of Art

Councilmember Guidry with NOMA Director Susan Taylor
At the request of Councilmember Guidry, the Council received a presentation from Susan Taylor, Director of the New Orleans Museum of Art (NOMA) regarding the museum’s centennial year. Since 1911, NOMA’s mission has been to inspire the love of art, collect and preserve visual art and to educate and engage the public. Taylor discussed NOMA 100, a celebratory exhibition that consists of 110 objects acquired over the past five years. The exhibition tells the story of the museum’s transformation over the past 100 years. To celebrate NOMA’s centennial, the museum will be open for 31 consecutive hours from Friday, December 16th at 10 a.m. to Saturday, December 17th at 5 p.m. The festivities will include art making, a variety of musical performances, yoga and a jazz brunch. Visit www.noma.org for a full list of activities and times.

District “A” Councilmember Guidry said, “The New Orleans Museum of Art is the City’s cornerstone of art and culture. For a century, NOMA has been a driving force in promoting, educating and encouraging an appreciation for the arts in New Orleans. We are grateful for all that NOMA has contributed to the artistic life of our community and look forward to a future that continues the traditions and accomplishments of a truly grand museum.”

Council President Clarkson and Chief Darryl Klumpp
At the request of Council President Clarkson, the Council heard a presentation from New Orleans Fire Department Superintendent Charles Parent and Deputy Superintendent Tim McConnell, acknowledging the heroic efforts of 8th District Fire Chief Darryl Klumpp. On Thursday July 28th, Chief Klumpp noticed smoke coming from the home of his neighbor and alerted the New Orleans Fire Department (NOFD). District Chief Klumpp bravely entered the burning home and rescued an elderly wheel-chair bound resident. Fernando Echeagaray was found in a bedroom and carried from the burning house. Firefighters arrived on the scene and Chief Klumpp directed firefighters on the ground. The fire was contained, ensuring that nearby homes were not destroyed.

NOFD Superintendent Parent and Deputy Superintendent McConnell also presented along with Louisiana State Fire Marshal Butch Browning, Director of New Orleans Louisiana State Fire Marshal Butch Browning, Council President Clarkson and Superintendent Charles Parent with a gift from the
City of Tuscaloosa thanking USAR personnel for their aid in the immediate aftermath of the spring tornadoes Emergency Medical Services and Fire Department Medical Director Dr. Jeffrey Elder, and St. Bernard Parish Fire Department Chief Thomas Stone, concerning the Urban Search and Rescue Task Force response to the spring tornadoes in Tuscaloosa, Alabama. On May 2, 2011, in the immediate aftermath of the destructive tornadoes, USAR personnel were deployed to Tuscaloosa. Their main task was to conduct searches in a densely populated area of Tuscaloosa. Technical expertise was needed to ensure that people were not trapped beneath rubble and to provide medical care. Information was provided to family members anxiously awaiting news regarding their missing loved ones. USAR personnel were able to search and clear an area which allowed for heavy moving equipment to move in and continue clearing debris.

Council President Clarkson said, “I am continually amazed by the bravery of our New Orleans firefighters and of the willingness of firefighters and disaster rescue teams in our City and the surrounding area to risk their lives for the benefit of others. These are the true heroes. Again and again, they go above and beyond what is required and exhibit selfless acts to protect the lives of citizens. We are so grateful to you for all that you do.”

The City Council has just begun its hearings on the mayor’s proposed 2012 city budget. As the final arbiters on the budget, this is one of the Council’s most important tasks. Community members can provide input at the Council budget meetings or by contacting their Council members.

At the bottom of this post please find a PDF that describes the process and the proposed 2012 budget in clear and simple terms (yes, it can be done!) that was prepared by the New Orleans Coalition on Open Governance.

The opportunity to have a voice in how the city spends our money is the essence of citizen participation, and I hope you will take just a few minutes to look this over and to take the opportunity to provide your input on what the priorities should be for our city in the year ahead.

Please join Mayor Mitch Landrieu and Councilmember Susan Guidry for a community meeting in your district to discuss budget priorities. The Mayor will bring his entire team including all Deputy Mayors and Department Heads, so come out and make sure your voice is heard.

The City Planning Commission, in accordance with Sections 3-117 and 6-104 of the Home Rule Charter of the City of New Orleans, will hold public hearings to consider Capital Budget requests by the departments and agencies for the 2012-2016 program years. The hearings will be held in the City Planning conference room located at 1340 Poydras Street, Suite 900, on the following dates:

ALL INTERESTED PARTIES ARE ENCOURAGED TO ATTEND. PUBLIC QUESTIONS WILL BE ADDRESSED FOLLOWING THE STAFF DISCUSSION ON THE PROPOSALS.