A concerned neighbor notified me that large trees were being removed on Ursulines. On Saturday, August 26, 2017, BDG Tree Service, a crew hired by Entergy, removed dead oaks and other trees on Ursulines at North White.

While it may be distressing to see the huge trees go, it is much less distressing than having that same dead tree on your roof during a storm. Thank you BDG Tree Service and Entergy! 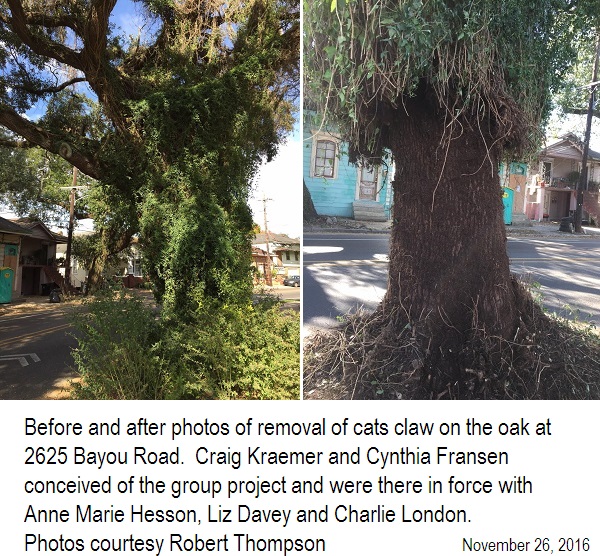 So many of you couldn’t help but notice its catastrophic green tide of foliage this year, breaking over trees and buildings, spewing streams of hazard-yellow blooms.

Cat’s claw, to answer your questions, is what it’s called, and of course it’s beautiful, in the way all the great predator cats of the world are wildly, terrifyingly beautiful — and best admired from afar.

Cat’s claw (the scientist who gave it the official name Macfadyena unguis-cati must have thought himself clever) is a South American vine that was probably introduced to the coastal South sometime early in the last century.

Used to be, there was an astonishing testament to the tenacity of cat’s claw, just below the interstate bridges headed into New Orleans. You could see it a mile away: The roof of a huge warehouse supported a jungle of cat’s claw green and yellow that could have covered four football fields. It took your breath away, seeing it crouched and ready to pounce on New Orleans harbor.

Cat’s claw seems to have a special attachment for roofs throughout the coastal South. In downtown Mobile, the tops of a number of houses and businesses are draped with it, as if wearing absurd green wigs, with thick curls of cat’s claw dangling from the eaves.

Cat’s claw is ideally suited for this rooftop lifestyle. The vine does, after all, have veritable claws — a trio of wiry, grasping tendrils at the tip of every leaf that dig into everything they touch, including wood, brick and concrete.

A shingled roof, with its rough surface and a thousand edges, is the ideal scratching post for cat’s claw. Less rapacious vines, even if they managed to hang on to a roof, would soon wither from the intense heat and blistering sunlight. But cat’s claw seems to seek out such seemingly inhospitable places. Even under the intensity of the summer sun, cat’s claw remains lush and green on its rooftop perches.

Of course, cat’s claw does climb other objects just as readily, and in Mobile has engulfed the tops of a number of large oaks.

But you don’t notice the vine in the trees, since it doesn’t really produce much foliage and flowers until it springs into the full sunlight at the very top of the canopy, out of eyesight of all below.

I haven’t passed by the warehouse in New Orleans on a summer day in the past couple of years, but chances are very good the old jungle of cat’s claw is still there. Cat’s claw is notoriously hard to control. Its sprawling tentacles are supported by a defiant root system that can spread over an acre or more. Every few feet, the root system swells into a large potato-like tuber that sends up another sprout. Cutting one vine only ensures that a hundred other vines attached to these tubers will grow more vigorously.

And that’s why you’ll find far more written about how to get rid of cat’s claw than you’ll find about how to grow it.
Here’s all you need to know about cultivating it: Anybody who doesn’t know better can grow it almost anywhere in the coastal South. It thrives even in very poor soils — to judge by some of the specimens downtown, moderately crumbly asphalt suits it just fine — and it’s famously drought-tolerant, surviving even in the desert climates of the West. While young, it is fairly shade-tolerant, but it is, at heart, a light hog, and by hook or by crook, will find a way to the sunniest spot in your yard, on top of your house, smothering the tops of your tallest trees.

The only natural curb on its rampant growth in our climate would be an exceptionally severe winter (it doesn’t often survive typical winters farther inland, north of Montgomery, which may be why it hasn’t become a legendary Southern icon like kudzu). Once every several years, a harsh cold front may kill much of the above-ground portions of the vine even in coastal areas. But substantial pieces of the root are likely to survive (as they have for decades in downtown Mobile) and will quickly resprout and produce hundreds of feet of vine in a couple of years.

Because it is such an outrageous specimen and produces genuinely showy flowers, one is always tempted to try to find a spot where it might be tolerated.

But keep two prerequisites in mind when planting: Cat’s claw needs something truly monumental, and preferably unattractive, to climb onto. And its root system should be surrounded on all sides by a dense, deep sea of asphalt and concrete, to limit the development of its surrounding tubers. Junkyards and the faceless north facade of Mobile’s Government Plaza come to mind, though I imagine it could be used just as effectively on the prison-like walls of Wal-Mart and other Big Box stores.

In case you didn’t understand: No home garden could accommodate its massive scale and rank growth.
[contact-form-7 404 "Not Found"]s
Perhaps, therefore, we’re fortunate that cat’s claw is not an easy vine to find at local retailers. Many nurseries wouldn’t touch it with a 10-foot pole because of its invasive reputation and the difficulty of controlling it in a pot.
It’s easy to propagate, which is probably why it spread so quickly through the warmer parts of the globe, but no responsible person is going to tell you how to make more of it. Some hard-headed gardeners will no doubt proclaim to have found it for sale on some Internet site, most likely from some Northern greenhouse operation where long winters tame its bad habits. But if you do bring it home, be courteous enough to let the neighbors know, so they’ll have time to put their houses on the market.