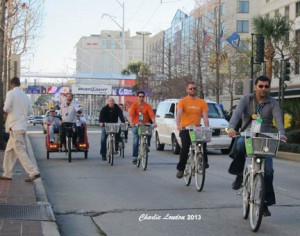 CICLOVIA in New Orleans is proposed for September 21, 2013. The proposed event will start at City Park then travel down Esplanade to Rampart and end at Armstrong Park.

Jamie Wine describes CICLOVIA in New Orleans this way, “With an activity every 100-200 feet – juggling, dancing, cooking demos, etc. It’s about getting active, fit, meeting others in the community and being healthier.”

WANT TO GET INVOLVED?

Long before cars arrived on the roads of New Orleans, our streets were places to meet and come together. Communities grew up around thoroughfares. They were easy streets to enjoy. We just think it’s time to reclaim the streets, just once in a while, to bring neighbors together. Let’s make the streets of New Orleans the place to be, not something to travel over at breakneck speed. That’s the mission of Easy Streets. It’s a project designed to bring the community together, safely, in a way that’s free of cars and exhaust.

We’ll have activities for people of all ages from 1 to 100. It’s the perfect place to walk around, meet your neighbors, watch a cooking demonstration, eat some fun food, even dance in the streets as Martha and the Vandellas recommended so many years ago.

Yes, we’re taking back the streets, but in a way that could only happen in New Orleans. So join us on Saturday, September 21st from 9:00AM to 1:00PM. Or better yet, join us early and be a part of bringing smiles to thousands of faces across this great city.

We are currently looking for program partners to lead, organize and create wellness activities, and also educate the participants of Easy Streets. Our goal is to have over 50 program partners for the day of the event, especially if you are willing to help make the inaugural program a huge success and lead the way for subsequent future events.

Full details of partnership (.doc) Application to be a partner – early applicants get the best locations on the route.

II. Approval of June 2013 Gen’l & Exec Meeting Minutes
III. Committee Reports/Updates/Actions (if any)
• Public Safety – update
• Membership Outreach Committee – successful Porch Crawl raised over $ 3,200 for Desmare Playground.
• Landscape Committee- Bobby Wozniak talked about the progress of the Coypu grant. $5,000 will go toward adding fish to Bayou St. John and $35,000 will go toward adding trees on the Parkview side of Bayou St. John along with a maintenance contract to care for the trees for a year. Bobby said a lot of indigenous vegetation was planted along Bayou St. John during Earth Day this past spring. Bobby added that the Orleans Levee Board filled the holes along the bayou with crushed granite and sand. The holes were made by nutria.• Re-Bridge – update
• Zoning Committee – the new Motown Coney Island hot dog business on Broad has applied for a liquor permit.

GENERAL INFORMATION ABOUT THE CYCLOVIA MOVEMENT IS BELOW

Ciclovia as defined by Wikipedia: Ciclovía is a term which translates from Spanish into English as “bike path” is either a permanently designated bicycle route or the closing of city streets to automobiles for the enjoyment of cyclists and public alike.

Each Sunday and on holidays from 7 am until 2 pm certain main streets of Bogotá, Cali, Medellín, and other municipalities are blocked off to cars for the exclusive use of runners, skaters, and bicyclists. At the same time, stages are set up in city parks. Aerobics instructors, yoga teachers and musicians lead people through various performances. Bogotá’s weekly ciclovías are used by approximately 2 million people (30% of citizens) on over 120 km of car-free streets.

The inspiration for Ciclovías is credited to the city of Bogotá, Colombia. The events have taken place since 1976 when they started through the efforts of organizer Jaime Ortiz and others. Some credit Bogotá Mayor Hernando Duran Dussan with starting Cyclovías in the early 1980s. Mayor Enrique Peñalosa deserves some credit for turning Bogotá into a safer cycling city by taking on the dominance of automobiles in the late 1990s. In Bogota, permanently designated bikeways are also known as ciclorutas, while streets temporarily closed for that purpose are called ciclovías.

Wikipedia indicates that ciclovia is popular around the world and has been used in numerous cities in the United States.


Taking the streets back on Sundays in San Francisco
***
http://m.theatlanticcities.com/jobs-and-economy/2013/07/s-right-los-angeles-giving-car-lanes-pedestrians/6116/

Los Angeles has a great deal of walkability despite its car-centric reputation, but much of it remains hidden to the public. In the city’s historic Broadway corridor, at least, that secret is about to come out. The city council recently voted to fund an initial redevelopment of Broadway into a legitimate pedestrian plaza — reducing six lanes of road down to three in the process.

The plan to “bring back” Broadway has been going on for about five years, but it really started to take shape in late 2009 with the public release of a street redesign. The first phase of this “Broadway Streetscape Master Plan” is a makeshift and very cost-effective ($1.8 million) conversion modeled on the pedestrian parcels implemented in New York City. The second phase, yet to be funded, is where the heavy transformations would occur.

The proposed changes will alter Broadway to its core. Instead of five travel lanes plus a “ghost” sixth lane for buses, the street will devote just three lanes to traffic and extend sidewalks and curbs for walking. Transit will be enhanced, too, with improvements to bus service and groundwork for a streetcar line the city hopes to bring to the corridor.
All told, Broadway’s reconfiguration will increase pedestrian share of the road from 38 percent, at present, up to 47 percent — just about going halfsies with cars.

The goal is to rejuvenate a Broadway strip that’s lost much of its historic charm, at least according to the master plan. While shoppers do flock to the area during the day, at night the street is largely shuttered to business. Some of the old theaters have even been converted into non-entertainment venues, though many have agreed to revive their previous roles once the street changes take place.

But Los Angeles has wisely chosen to pursue this goal by making Broadway a much friendlier place to walk around. Right now the traffic whizzes right next to the sidewalk without a buffer, and the 56-foot crosswalks are daunting. The new plan will broaden and beautify the sidewalks and, in addition to reducing the crossing length, also include mid-block refuges.

The traffic studies suggest that the plan represents a true shift in priorities. On their own, the proposed alterations will put a strain on some intersections during morning and evening rush — at least so far as car level-of-service is concerned. But the plans intend to mitigate this impact by promoting walking and transit, and the master document makes clear that vehicles will take a backseat, if you will, to alternative modes.

Instead of seeing an efficient street as one that moves a certain number of vehicles through its intersections at certain target speeds, or one that maximizes throughput, this Plan seeks to move people both through and along the street, in a multi-modal fashion, in order to achieve efficiency and maximize input and output, be that by bus, bike, streetcar, delivery truck, or car.

The plan is far from perfect. The choice for streetcars in the corridor seems inspired more by nostalgia than true mobility: as currently conceived, they will share the road with other traffic and may be redundant with some buses. While plans do call for bike racks, there’s no sign of bike lanes. And parking is a key to the new corridor, no doubt a nod to business demands, although the best new research suggests that retailers make more money over the long term from walkers than from wheels.

But there’s still time to work on the details — phase one won’t be done until the end of the year — and even in its current form the Broadway plan serves a greater purpose. The more that walkability is brought to high-profile parts of Los Angeles, the more that Angelinos can think of it as a natural part of their city as opposed to a hidden gem.