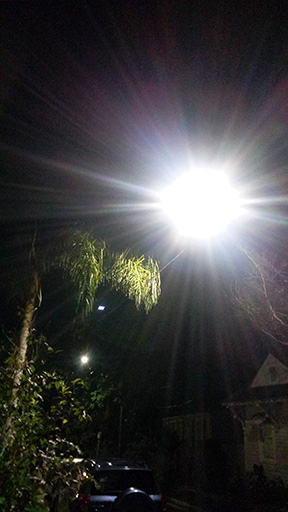 The first street lights with light emitting diodes appeared in Faubourg St. John about two years ago. This past week many more were installed in the area in and around the 3200 block of Esplanade and the businesses along Ponce de Leon. These brighter, whiter lights are significantly better and last longer.

Faubourg St. John has received excellent response from the City on a number of issues including street lighting.  While there are always those who will gripe, moan and complain that they didn’t get what they wanted when they wanted it, there is no quick-fix solution.   You have to call 311 about problems you notice and you have to follow up on the issue.

There is no City employee running around in a pickup truck looking for streetlights that are out, potholes that need filling or storm drains that need to be pumped out.

The City needs you to work WITH them and call 311 whenever you see something that needs to be taken care of… and follow up.    http://nola.gov/311/

Call 311 anytime you see a streetlight out.  For more about what the City of New Orleans is doing about streetlights in New Orleans, please read below.

When the Landrieu Administration took office in 2010 there were over 16,000 streetlight outages in New Orleans (over 29%). Since then, the City has fixed over 43,000 streetlights. In 2012, the City used one-time federal stimulus funding to convert over 17,000 streetlights to energy-efficient Light Emitting Diode (LED) lights. Over 30% of the streetlight system has already been converted.

On July 1, 2014, the City began a major streetlight upgrade and improvement initiative. A total of $16.4 million will be used to continue converting conventional streetlights to energy-efficient LED streetlights and perform needed capital repairs while a long-term, sustainable funding source is identified.

Under this program, the City will use $1.7 million in City Capital and Infrastructure Trust funding to perform permanent streetlight system upgrades and replacements including:

The first priorities under this program are to improve street lighting along Interstate-10, Interstate-510 and Interstate-610, and upgrade critical system infrastructure to increase system reliability.

View a larger version of the conversion map by clicking here. 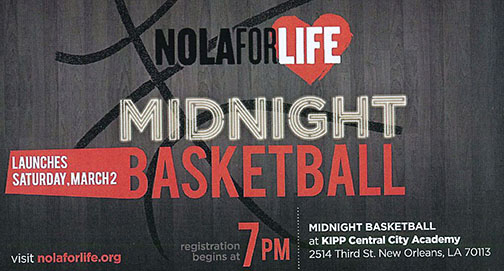 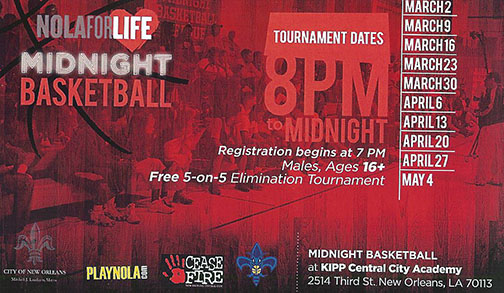 Mentorship and educational support are also key components of this initiative. NOLA for LIFE Midnight Basketball is free of charge and open to males over 16 years old.

Developed in May 2012, NOLA FOR LIFE is New Orleans Mayor Mitch Landrieu’s comprehensive murder reduction strategy to tackle the city’s historically-high murder rate. Recognizing that law enforcement alone cannot solve the murder problem, the NOLA FOR LIFE plan takes a holistic approach to get to the root of the problem, and divides the plan into five main categories including: Stop the Shooting; Invest in Prevention; Promote Jobs and Opportunity; Improve the NOPD; and Get Involved and Rebuild Neighborhoods. Development of the NOLA FOR LIFE plan was fueled by the Mayor’s Innovation Delivery Team and the City’s public safety and public health experts.
WHAT: NOLA FOR LIFE Midnight Basketball
WHEN: SATURDAY, March 2, 2013
Registration: 7PM
Games: 8PM – Midnight
WHERE: KIPP Central City Academy
2514 Third Street
New Orleans, LA 70113