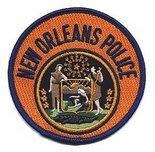 On Sunday, February 10th, a 52-year-old man lost $16.50 that he had in his pockets after an armed robber approached him from behind about 8:10 p.m. at the corner of North Lopez and St. Philip streets, police said. The robber pushed the victim against the victim’s car, took the money and fled.” NOPD’s 1st District caught the suspect as he was fleeing down Ursulines Avenue .

An armed robbery of a neighbor on Maurepas @ Crete happened just after 9pm on Monday, February 11, 2013. The perpetrators then attempted to rob another neighbor on Grand Route. The 1st District NOPD then set up a perimeter and all three were apprehended successfully. No citizens injured. One Officer sustained a minor injury during the chase. Really excellent work by 1st Police District!