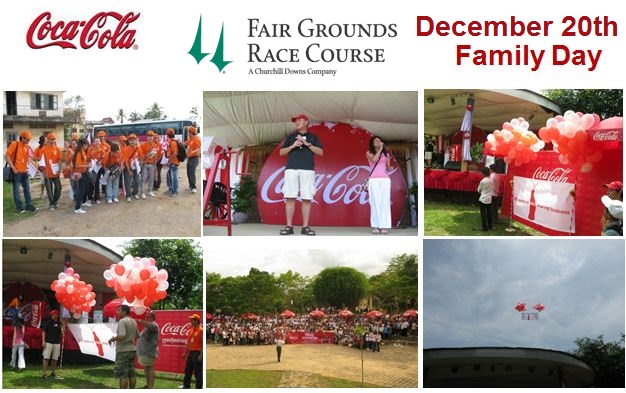 On December 20th, the Fair Grounds will host a Coca-Cola Holiday Family Day from noon until 4 p.m. in the Starlight tent on the track apron. 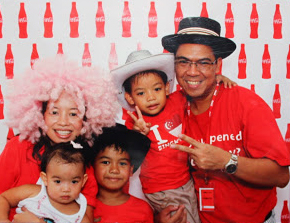 A merry and bright day of celebration with entertainment options for the entire family coincides with a pair of $50,000 stakes races.

Admission to the Coca-Cola Holiday Family Day Experience is $5 and children 12 and under are admitted free. General admission to the racetrack is free on December 20.

Once inside the Coca-Cola Holiday Family Day Experience, families can partake in face painting, crafts, and coloring. Cookies can be purchased and custom decorated for $1, and photo print-outs with Santa are available for $5. Food and beverage specials will be available and will include Coca-Cola beverages and Coca-Cola branded signature holiday ornaments.

Coca-Coca Holiday Family Day will have a special first post of 12 p.m.

Fair Grounds Race Course & Slots, the nation’s third-oldest racetrack, has been in operation since 1872. Located in New Orleans, Fair Grounds is owned by Churchill Downs Incorporated (NASDAQ Global Select Market: CHDN); it also operates a slot-machine gaming facility and 11 off-track betting parlors throughout southeast Louisiana. The 143rd Thoroughbred Racing Season – highlighted by the 102nd running of the Louisiana Derby – will run from November 2014 through March 2015. More information can be found online at www.FairGroundsRaceCourse.com.

NEW ORLEANS (Saturday, December 13, 2014) – Brittlyn Stable’s Sunbean turned on the heat down the Fair Grounds stretch to win his second consecutive $150,000 Louisiana Champions Day Classic and become racing’s newest and Louisiana’s sixth millionaire.  On a sunny Saturday afternoon at the historic New Orleans oval, the Pelican State-bred son of Brahms won his 13th race in 20 career starts and defeated four others, despite breaking a couple lengths behind the field.  After settling into stride in last, the bay gelding methodically made his way into contention and approached the leaders at the top of the stretch.  In the end, he overpowered stablemate Watch My Smoke, who was later disqualified for hindering One King’s Man and placed third behind that rival.  The win was his third stakes in six weeks’ time.

“He got off about two or three steps behind the field,” Lanerie said.  “After that I just got him to relax and get back into the race and then he proved he was the best.”

“Usually we would like him to be in more of a stalking spot right off the pace,” added Faucheux.  “But it is what it is – he’s a good horse and good horses overcome.  We’re just so excited to win this race and move on to the next one.”

Brittlyn Stable principal Evelyn Benoit, who also owned Louisiana millionaire Star Guitar, echoed Faucheux’s enthusiasm.  “Sunbean just proved that the impossible dream is possible,” she said.  “I was dreaming about this for a week.  You really can’t dream anything like this – first Star Guitar and now Sunbean. When I saw the break, I really started praying.  Thank God Corey made it and things worked out.  We keep thinking he’s a mile or a mile and a sixteenth kind of horse, but he has proved us wrong.  Give him a horse to run at and he likes to run them down at a longer distance.”

Louisiana Flyboy and Request a Puck completed the order of finish.

TURF – Charles C. Smith’s String King was a popular winner of the $100,000 Louisiana Champions Day Turf in front of an appreciative Fair Grounds crowd who backed the son of Crowned King to odds of 1-2.  Under the guidance of leading rider James Graham, the 6-year-old bay gelding sat mid-pack before launching a strong stretch run that would carry him to a 1½-length victory over Tiger Run and Stormdriver.  The victory was his 14th in 33 career starts and comes one year after finishing second in the Classic to Sunbean by a heartbreaking nose.

“I was a little bit (worried) down the backside, but he was rating well,” Graham said.  “He’s a good horse and does it on his own – that’s the way he is.”

Trainer, owner and breeder Smith was taken aback by his horse’s performance.  “There’s nothing left to say – just look at what he does for yourself,” he said.  “He has shown it on the racetrack, like always.”

LADIES – The $100,000 Louisiana Champions Day Ladies produced a stellar wire-to-wire victory for Eugenia Thompson and Hickory Stables’ Our Quista who outlasted closing favorite I Dazzle down the stretch to a 2½-length victory under Corey Lanerie.  The lightly raced daughter of Half Ours won for the fourth time in seven starts for trainer Al Cates and won her second consecutive stakes following August’s $150,000 Elge Rasberry Stakes at Louisiana Downs.  The sophomore filly covered the 1 1/16 miles on the main track in 1:46.40 and returned $10.60, $6 and $4.80.  Blading Wild Cat was 1½ lengths astern I Dazzle in third.

“She beat the gate and broke really well,” Lanerie said.  “I felt a little pressure down the backside, but she did enough to stay in front and when I called on her she did her thing.”

Two-for-two now going a distance of ground on dirt, the dark bay charge has impressed her conditioner.  “When we stretched her out she improved tremendously,” Cates remarked.  “She gets out on the lead and relaxes and she’s been training so well.  We thought we would stretch her out here again and it worked out pretty good.”

SPRINT – The $100,000 Louisiana Champions Day Sprint featured one of the most thrilling finishes of the day when William Deckwa, Jr.’s Too Dim overcame an impossible start – spotting the field over six lengths – and ran down favored defending champion Heitai in the final yards to win by a neck under Miguel Mena for trainer Eddie Johnston.  The victory was Too Dim’s second consecutive over Heitai after a Nov. 23 half-length decision in a muddy optional claimer.  The 5-year-old gelded son of Mutakddim completed the six furlongs in 1:10.08 while winning his 10th race in 23 lifetime starts and paying $11.20, $4 and $2.60. All Owls finished third 1½ lengths behind Heitai.

“This is a nice horse, but he got left in the gate,” Mena said.  “They told me to make an eighth of a mile run on the rail and that’s what we did and it worked out.”

Johnston was elated with his horse’s performance, especially considering the dreadful start.  “I really didn’t expect this after the break,” he said.  “I was hoping he could just finish with him and get something out of the race.  Once he got on the rail and started picking it up, he just kept on coming.  It worked out.”

LADIES SPRINT – The $100,000 Louisiana Champions Day Ladies Sprint proved a formful event as the two favorites – Afternoon Tango (2.70-1) and Blessed Immaculata (2.60-1) – finished one-two.  Big Aut Farms’ Afternoon Tango proved the better of the duo as the daughter of Afternoon Deelites powered home a two-length victor over her rival, improving off her runner-up finish in last year’s event.  Ridden by Diego Saenz for Patrick Devereux, the 4-year-old dark bay filly was ridden with credence as she swooped past the leading bunch and coasted to victory over her aforementioned rival and eventual third-place finisher Wire Me Bessie, despite being on the wrong lead.

“I was surprised to be that far back, but I was happy with her,” Saenz said.  “She really responded, even though she didn’t switch leads.”

JUVENILE – The $100,000 Louisiana Champions Day Juvenile saw a promising and undefeated gelding stay that way in Phyllis Hodges’ Mr. L. S. Shoe, who circled the leaders en route to a three-length victory over Jazzy Rebel and Grande Basin.  Trained by James ‘Sweet’ Hodges and ridden by James Graham, the son of Forefathers was ridden confidently throughout, despite breaking from the outside 14-post.  The gray charge ran the six-furlong distance in 1:11.68 and improved his record to three-for-three while paying $4.80, $3 and $2.60.

“I was able to tuck in a little bit around the turn and he came home and finished it up,” Graham said.  “I think he’s an improving 2-year-old and he feels like there’s plenty left.  He’s so happy with himself and he rates and lets you do whatever you want with him.”

“It’s easy to train a good horse,” Hodges added.  “We’ve wondered about him because he acts up like he did today in the paddock, but my wife bred him and raised him and we’ve always thought he was special.”

LASSIE – The $100,000 Louisiana Champions Day Lassie was an exciting display of class and closing speed as Gary Scherer and Bill Ulwelling’s Wind Chill Factor asserted herself by 4¾ lengths over a competitive field of ten other fillies to win her second consecutive stakes after taking the $150,000 Louisiana Jewel on Nov. 22 at Delta.  Ridden by Willie Martinez, the daughter of Successful Appeal won for the third time in four starts while completing the six furlongs in 1:11.67.  She paid $8.40, $4.80 and $3. Longshot Lady Emily Sage was second and odds-on favorite Vivian Da Bling finished third.

“It set up perfectly,” Martinez reflected.  “On paper it looked like (the pace) would set up quickly, so right away I got a good position.  She broke perfectly and we got good momentum going to the three-eighths pole.  From there she was her own pilot.  She has started figuring out what it’s all about.  She’s really good.”

Scherer, who also trains the charge, confirmed that the filly will be pointed toward the filly division of the $100,000 Louisiana Futurity on New Years’ Eve.

STARTER – In the $50,000 Louisiana Champions Day Starter Stakes, Maggie Camejo and Antonia Noonan’s The Louisiana Kid continued his improvement since joining the Jose Camejo barn, cruising wire-to-wire under Miguel Mena and completing the mile and 70-yard event in 1:44.06 over five others by two comfortable lengths.  Sent off at 8-5, the son of Afleet Alex improved his record to seven wins in 31 starts and returned $5.40, $3.20 and $2.40.

QUARTER HORSE – In the day’s opener, the Grade II $100,000 Louisiana Champions Day Quarter Horse Classic, Douglas O. Traylor’s Dashin Gage was sent to post as the public’s 4-5 wagering choice and did not disappoint, registering a head victory over Jls Mr Bigtime. Trained by Kenny Roberts and ridden by Jose Vega, Dashin Gage covered the 440-yard distance in 21.841 seconds and returned $3.80. The $46,391 winner’s share boosted his career earnings to $332,423 as he won for the seventh time in 21 lifetime starts. Blue Louisiana Jolla was third.

By running second and earning $17,525 for his efforts, Jls Mr Bigtime became only the second Louisiana-bred quarter horse to surpass the $1 million mark in career earnings, boosting his bankroll to $1,017,472. Jls Mr Bigtime was honored with a special presentation in the winner’s circle after the race for his achievement.

Ana Alvidrez’s Scooter Prize captured the seventh race of her career in winning the $100,000 Grade II Louisiana Champions Day Quarter Horse Derby. Ridden by Raul Ramirez, Jr. for trainer Martin Trejo, Scooter Prize returned $13.60 and completed the 400-yard trip in 19.925 seconds. Scooter Prize earned $45,454 for the victory and is now a career earner of $219,845. Hesablackmagic was second and The Game Cartel finished third.

Roderick L. Carter and Mykelia Carter’s Louisiana Jambalaya kept his perfect local record intact with his third win from as many Fair Grounds starts when annexing the $100,000 Grade II Louisiana Champions Day Quarter Horse Juvenile. With his fourth win in six lifetime starts, Louisiana Jambalaya boosted his career bankroll to $178,262 with the winning prize of $45,000. Trained by Justin Dehart and ridden by regular rider Lucas Constantin, he returned $6.80 as the post-time favorite and traveled the 350-yard distance in 17.408 second. Game was second and Zoomin For Bugs was third.

Fair Grounds Race Course & Slots, the nation’s third-oldest racetrack, has been in operation since 1872. Located in New Orleans, Fair Grounds is owned by Churchill Downs Incorporated (NASDAQ Global Select Market: CHDN); it also operates a slot-machine gaming facility and 11 off-track betting parlors throughout southeast Louisiana. The 143rd Thoroughbred Racing Season – highlighted by the 102nd running of the Louisiana Derby – will run from November 2014 through March 2015. More information can be found online at www.FairGroundsRaceCourse.com.