Faubourg St. John neighbor Gary Granata would like you to know more about Slow Food NOLA. 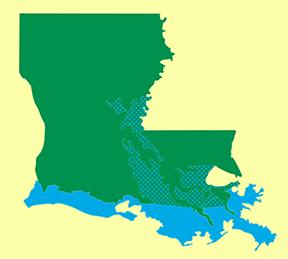 Slow Food New Orleans announces it will host Slow Fish 2016 in New Orleans: Gateway to the Americas, March 10-13, 2016 at the Old US Mint and French Market. Slow Fish is Slow Food event that is an international gathering of fishers, scientists, chefs, students and food artisans to address the many environmental, ecological, economic and political challenges that impact fisheries, habitats, oceans, sustainable fishers and cultural seafood systems. Slow Fish has been held every two years in Genoa, Italy. Slow Fish 2016 in New Orleans will be the first time the event will be held in the western hemisphere. 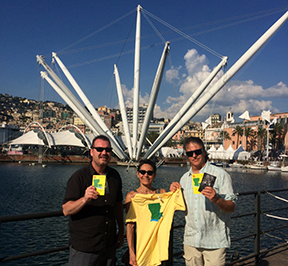 Slow Food New Orleans recently sent a delegation to Slow Fish 2015 held in Genoa, Italy at the historic Porto Antico. Pictured in front of the “Old Port” are (L-R) Chef and Co-Chair Dana Honn, Chef Christina Honn and Chair Gary Granata. Chefs Dana & Christina participated in the Chef’s Alliance Kitchen and delighted conference attendees with Louisiana Seafood Sauce Piquant served with organic grits and cornbread. Dr. Granata presented “Louisiana is Washing Away” during two separate sessions in which Slow Fish 2016 in New Orleans was officially announced. All three delegates participated in several workshops and panels that addressed the many environmental, ecological economic and political challenges that impact fisheries and sustainable fishers … conversations that will continue at Slow Fish 2016 in New Orleans. 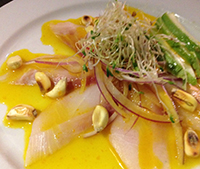 Slow Food New Orleans is hosting Fish Tales & Cocktails, a by-catch happy hour on Monday July 13 6-8p at L’Entrepot, 527 Julia Street in New Orleans. The event is the first of several leading-up to Slow Fish 2016 in New Orleans: Gateway to the Americas. The event will feature small plates of locally sourced seafood, not normally served in restaurants, prepared by Chefs Dana & Christina Honn of Cafe Carmo, Chef Alex Harrell of Angeline and Chef Michael Doyle of Maurepas Foods. Admission and live music are free with small plates and seasonal cocktails available for purchase.

Slow Food New Orleans also sent a delegation to Slow Meat in Denver earlier this month. Slow Food New Orleans board member Seth Hamstead, farmer/rancher Chris George and boucherie-master Toby Rodriguez gathered with people across the nation who are developing sustainable alternatives to industrialized meat. Seth has been very involved in promoting pastured local meats in New Orleans and is a partner of Continental Provisions in the French Market. Chris operates the George Family Farm in Eclectic, Alabama that specializes in raising heritage breeds of cattle, pigs and sheep along with employing sustainable methods to grow heirloom vegetables. Toby Rodriguez operates Lache Pas Boucherie in Lafayette. Stay tuned for more delicious news and events from this Slow Meat group. 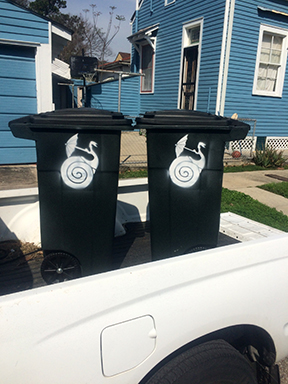 Slow Food New Orleans is picking up vegetable waste from 1,000 Figs, Cafe Degas & CC’s Coffee on Esplanade and mixing it with the bags of leaves left along the streets of Faubourg St. John to make rich compost and soil for the Slow Food Garden. Anyone interested in assisting with the garden and compost are welcome to join us as we compost and grow Good, Clean and Fair Food. The garden is located on the corner of St. Philip and North Dupre in Faubourg St. John.

Slow Food Membership
Please become a member of Slow Food and join people from 160+ countries in this grassroots movement to promote Good, Clean and Fair Food for everyone. Join online through the Slow Food USA membership site. Be sure to select Slow Food New Orleans, on the e-form, as your Primary Chapter so that you will appear on our membership roster.

Slow Food Social Media Outlets
Slow Food NOLA now has more ways for you to follow and participate in the latest developments in the world of Good, Clean and Fair Food. You have the options to follow us on Facebook & Twitter. Year 3 of Slow Food NOLA will see us developing programs and committees around the Slow Food Ark of Taste, the Snail of Approval program, Food Communities in addition to welcoming the world of Slow Fish to New Orleans. Please use these social media outlets to follow our progress in these areas and become involved in YOUR Slow Food New Orleans chapter.

Many thanks to another involved neighbor, Gary Granata, who takes care of the Community Garden at St. Philip and North Dupre. 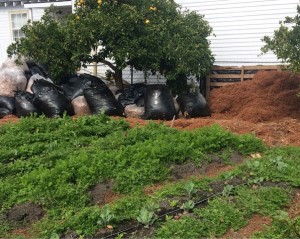 We have been collecting bags of leaves and raking-up cypress needles all around Faubourg St. John to enrich the soil in the Slow Food Garden and grow delicious seasonal greens. The garden has also produced a bounty of volunteer pepper grass, shown in the picture, that will be part of both the greens served at Nose-to-Tailgate and the salad at the Feast of the Epiphany.

The sustainable practice of collecting bagged leaves has huge environmental and economic benefits.   Bagged leaves and yard waste comprise nearly 30% of the garbage that makes its way to overburdened landfills.   Keeping this valuable organic matter out of the waste stream helps to alleviate this burden, in addition to creating rich soil for growing Good, Clean and Fair Food!

Nose to Tailgate Whole Hog BBQ at the Sugar Bowl

on their farm.
The Little Gem Saloon is located at 445 S. Rampart on the corner of S. Rampart and Poydras, 2 blocks from the Super Dome. The entire upstairs of the Little Gem Saloon will be open to the public to tailgate (balcony-gate), enjoy a cash bar & watch the Rose Bowl (4p kick-off) on several HD flat screen TVs. BBQ plates will be sold with the proceeds going to benefit Slow Food New Orleans. Come enjoy some Good, Clean & Fair Food and be part of the inaugural College Football Playoff. 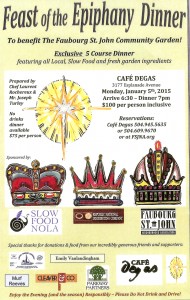 The Faubourg St. John Neighborhood Association is hosting a 5-course Feast of the Epiphany at Cafe Degas on January 5. Proceeds from the dinner will benefit the neighborhood garden operated by Slow Food New Orleans and Parkway Partners.

The Slow Food New Orleans garden in Faubourg St. John is growing greens and citrus that is regularly featured on the menus of neighborhood restaurants Pagoda Cafe and 1,000 Figs. Revenue created by the sale of this fresh food will support the garden and eventually fund a Slow Food Garden in Africa. Please contact Gary Granata if you are interested in volunteering in the garden … and please visit Pagoda and 1,000 Figs for some Good, Clean & Fair Food.

Slow Food NOLA now has more ways for you to follow and participate in the latest developments in the world of Good, Clean and Fair Food.   You have the options to follow us on our facebook page  & Twitter feed.  You can also interact with one another on our new facebook group and Google group.  Year II of Slow Food NOLA will see us developing programs and committees around the Slow Food Ark of Taste, the Snail of Approval program,  Food Communities and Gardens in Africa.   Please use these social media outlets to follow our progress in these areas and become involved in YOUR Slow Food NOLA chapter.

Wednesday, December 10 at 6:00pm at the Southern Food and Beverage Museum in New Orleans.

Fifteen Louisiana residents made the trip to Italy to present their workshop “Louisiana is Washing Away”, during which they shared the challenges and joy of living in the unique and fragile region that is Coastal Louisiana. They also learned how Good, Clean and Fair Food is practiced around the world. 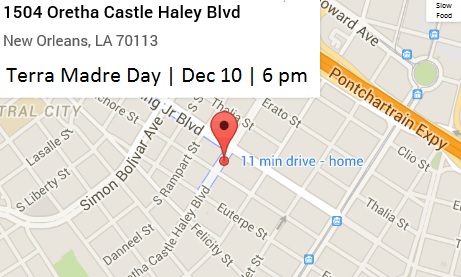 Chef Ryan Hughes of Purloo will serve an apertivo (Italian Happy Hour) during the program and offer an Ark of Taste dinner for anyone that would like to dine afterwards. Terra Madre Day | Dec 10 | Southern Beverage Museum | 1504 Oretha Castle Haley Blvd. | New Orleans | 6-8 pm 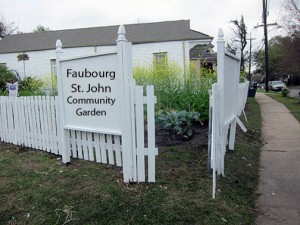 Slow Food NOLA is now operating a community garden at the corner of St. Philip and N. Dupre in Faubourg St. John.
The garden grows seasonal foods and flowers for sale at local markets. Proceeds from the sale of produce will, in part, go towards Slow Food NOLA’s effort to adopt a Slow Food Garden in Africa. Please contact Slow Food NOLA chair Gary Granata if you are interested in volunteering in the garden.