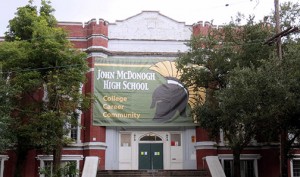 The Superintendent of Charter Schools notified the faculty and staff yesterday at John McDonogh High School that the school will close at the end of the school year. Students will be notified today.

Steve Barr came to New Orleans just a year and a half ago to confront one of the most difficult jobs in education: putting a struggling urban high school on an upward trajectory. Courted by local education leaders, he came to that job with impressive credentials as a turnaround artist in Los Angeles, where his unlikely successes had already been chronicled in books and the pages of The New Yorker magazine.

Last year, in a controversial decision, he invited camera crews from Oprah Winfrey’s TV network to capture his latest crusade.

But on Friday, Barr and the local school district that invited him to run John McDonogh High School on Esplanade Avenue officially acknowledged what had become increasingly apparent over the past year: that his latest turnaround effort is not working.

Unable to attract enough students to make the school financially viable, and so far unable to lift the school’s test scores or graduation rates from the absolute bottom of the state’s rankings, Barr’s charter school group, Future is Now, will cease to operate John McDonogh at the end of this spring.

Aware of the community outcry that would certainly result from closing the school permanently, the Recovery School District will instead move ahead with an already planned renovation of the school’s aging building. But it does not seem likely that Barr’s group will be back to manage the school when it reopens in two years.

In an interview this week, Recovery District Superintendent Patrick Dobard acknowledged that it had been a mistake in the first place to put Barr in charge of a daunting turnaround effort in a building that is more than 100 years old and falling apart.

“We should have done this right from the outset,” Dobard said. “This will give the school a fresh start. The school is struggling academically, and for a number of reasons, the Future is Now folks felt they couldn’t survive.”

For his part, Barr framed the decision to give up managing the school as hinging more on problems with the building than with its academic performance. Even after John McDonogh’s test results came out late last year, he defended the school’s principal and argued it was too early to write off the whole effort.

He would not rule out playing some type of role at the school when it reopens, but he did acknowledge that there have been no concrete discussions on that topic with district officials. He laid some blame both on himself and on the district for deciding too quickly to keep John McDonogh open without having a firm plan for how the school would operate during extensive renovations.

“It’s just really hard to turn a school around and change the culture when you’re in a school that looks like a closed down factory,” Barr said, adding that his ambitious plans to start a culinary program and upgrade the schools use of technology couldn’t happen in the existing facility, nor the trailers that Future is Now might have been operating out of during construction.

“You could never do that until the school got knocked down,” he said.

The decision to temporarily close John McDonogh will mean a scramble among students, teachers and other staff to find someplace to land next school year. For district officials, the example to avoid is Sojourner Truth Academy, a small charter high school that imploded in 2012, leaving its remaining students idle and rudderless in its final months.

District officials said the roughly 225 students at John McDonogh who aren’t slated to graduate in the spring will get first priority in the city’s unified enrollment process for next school year, and that extra staff will be on hand to assist students and teachers with finding a new school.

The chaos that can result for families and staff when a school closes has been one of the more controversial aspects of the charter school movement, which has remade public education in New Orleans over the past eight years.

Charter schools, run by independent nonprofit groups, typically have to keep test scores up, or at least moving the right direction, to continue operating. The idea is to avoid the traditional school district model, which allowed some schools to languished for decades without improving results.

The downside can be a brief but wrenching few months in which a closing school muddles through a final semester, with teachers fleeing for other jobs and students losing crucial instructional time. It’s an especially acute problem for high school students, who also have to navigate the ACT exam and college admissions.

Staff and students at John McDonogh said Friday that they would not let up in their last few months. Principal Marvin Thompson gathered students in the school auditorium in the morning and praised their decorum and academic performance in the classroom as “unlike anything I’ve seen anywhere else.”

“When the school re-opens,” he told them, “it will be your last efforts that will be remembered.”

Katy Reckdahl contributed to this report.