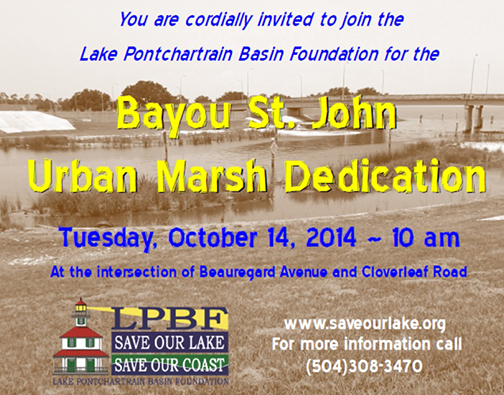 The Lake Pontchartrain Basin Foundation has recently completed construction on a wetland creation project at the mouth of Bayou St. John.  Over half an acre of marsh has been created and planted using dredge spoil from the channel dredging project for the Bayou St. John sector gates.  The wetland is now thriving with numerous fish and birds spotted within the lush plants. The Lake Ponchartrain Basin Foundation is holding a formal dedication of the wetland to the city on the morning of Tuesday, October 14th.

Bayou St. John is a natural and historic bayou within the city limits of New Orleans.  The bayou has great historical significance since the bayou was used by French explorers to found New Orleans in 1718. Although the bayou has been highly altered from its natural swamp terrain and hydrology, the bayou has attained great urban beauty and is a prized green space corridor that runs from the Lafitte corridor to Lake Pontchartrain.

In spring 2013, the Orleans Levee District undertook a dredging project to unplug the mouth of Bayou St. John at Lake Pontchartrain and improve water flow inward when the floodgate is open. This is part of a series of projects intended to improve the Bayou’s hydrological and ecological function, including the recent removal of a nearby dam. The dredging project was an opportunity to beneficially use sediment for environmental enhancement.

Biologists working with the Lake Ponchartrain Basin Foundation developed a plan to build a containment dike using a relatively new product (called DeltaLok), and to have dredge material placed in two areas within the Bayou for the purpose of marsh creation to create an isolated area of marsh area along the otherwise armored seawall which stretches for ten miles along New Orleans’ recreational lakefront and Lakeshore Drive.  The Lake Ponchartrain Basin Foundation hopes that the new marsh will draw the community to enjoy and embrace the area, and help focus international attention on Louisiana’s rich but imperiled environment. 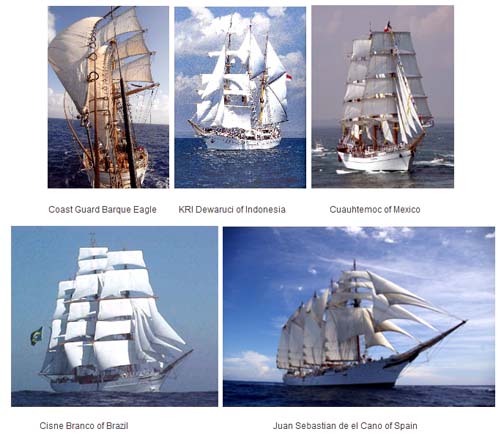 New Orleans will serve as the inaugural city in a three-year national celebration commemorating the War of 1812 and the Star-Spangled Banner.

The 2012 celebration will take place April 17 – 23, 2012, featuring a colorful spectacle of ships spreading on the East Bank of the Mississippi River from Erato Street to Upper Poland Avenue. Additionally, the Navy’s famed Blue Angels will perform a memorable air show as part of the week’s festivities.

The U.S. Navy’s amphibious warship USS Wasp, along with other large navy vessels, will welcome Class A tall ships from countries around the world to New Orleans, joining the U.S. Navy and OpSail 2012 for the celebration. The theme, “Our Flag Was Still There,” will mark the festivities in seven ports and across the country.

In each of the port cities, beginning with New Orleans, ships will be open for public visiting, and citizens will have the opportunity to interact with sailors from around the world. In addition to the Navy fleet and tall ships lining the Port, and the Blue Angels air show, activities will include official visits among regional dignitaries and Navy leadership, visiting sailors engaged in friendly sporting competitions, a seafood cook-off, and regional outreach and community service projects by visiting sailors.

“From 2012 to 2015, the United States Navy and its partners, including Operation Sail, Inc., will commemorate the War of 1812 and the writing of our national anthem, the Star- Spangled banner,” U.S. Secretary of the Navy Ray Mabus said. “It is remarkable that 200 years ago, one of the first wars in our country’s history was fought against nations who have become our closest allies.”

“Bringing the tall ships of the world back to U.S. waters for the commemoration of this glorious American milestone excites the imagination,” said chairman of Operation Sail, Inc., Jose Fuentes. “Throughout 2012-2015, millions of people will witness these graceful and majestic sailing ships as they parade in together, and celebrate brotherhood of the sea, and of our freedoms.”

WHAT:
The Blue Angels, the U. S. Navy’s Flight Demonstration Squadron, will put on an air show at the New Orleans Lakefront. A Blue Angels flight demonstration exhibits choreographed refinements of skills possessed by all naval aviators. The Blue Angels’ C-130, affectionately known as Fat Albert, begins each demonstration by exhibiting its maximum performance capabilities during a ten-minute performance. Shortly thereafter, you will see the graceful aerobatic maneuvers of the four-jet Diamond Formation, in concert with the fast-paced, high-performance maneuvers of its two Solo pilots. Finally, the team illustrates the pinnacle of precision flying, performing maneuvers locked as a unit in the renowned, six-jet Delta Formation.

WHY:
NOLA Navy Week is a kickoff to a three year commemoration of the 200th anniversary of the War of 1812 that will also end in New Orleans in 2015. Other ports the tall ships and military vessels will visit are the Atlantic Coast in New York, Norfolk, Baltimore, Boston, and New London. Commemoration events in the Great Lakes will take place in Milwaukee, Chicago, Toledo, Cleveland, Detroit, and Buffalo.