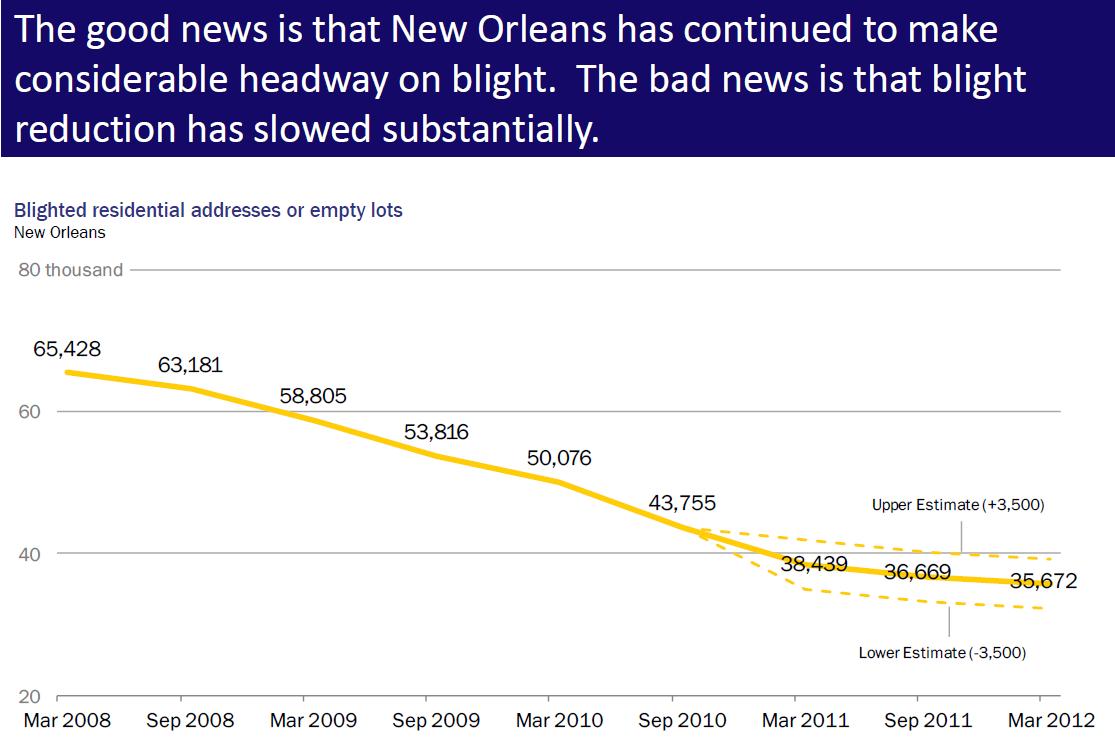 The Landrieu administration currently has a goal
of removing 10,000 “units” of blight in 4 years.
Units are individual apartments/condos or lots with blight.

Much of the precipitous drop in blight since 2005 has been individual homeowners refurbishing their homes. The City has instituted a much lauded BlightStat program that has done a tremendous job with few resources.

And, there is where the problem is… few resources. When crime is rampant, infrastructure is crumbling and the city struggles to keep the streetlights working, should blighted properties be a main emphasis where significant resources are allocated?

If so, are you willing to pay more taxes to make that happen? I am. I’d like to suggest a specific blight tax be implemented to help get blight removed from New Orleans. And, with that increased tax, I’d like to see an ordinance passed that says something like, “any property blighted since 2005 will have action taken on it by the City of New Orleans, regardless.” This would include blighted property that has people living in it. Why? Because 7 years is long enough for anyone to decide what to do with their property. Blight is holding back New Orleans. Blight contributes to crime and scares off potential investors… those investors bring jobs.

So, do we ignore the problem and complain that the city isn’t doing enough or do we step up and demand that a Blight tax be implemented and that it be spent specifically on blight reduction?

And, how ’bout an ordinance that makes it easier for the city to rid New Orleans of blight? Is it fair for the responsible citizen to live next to blight just because? How long should the irresponsible owner be given to do something about their blighted property… 7, 10, 20 years?
I don’t think so.

Quite frankly, the city is doing the best they can with what they’ve got. Unfortunately, there just isn’t enough manpower to get the job done… specifically on the legal end. Click here to read my thoughts about this in a previous BlightStat report. The city can get the properties inspected timely but the adjudication process is slow and laborious. Yes, we should protect the owner’s property rights. But, how long should property owners be allowed to affect your quality of life… 7, 10, 20 years? I don’t think so.

In the link below please find the city’s latest presentation on blight reduction in New Orleans:

A PDF of the City’s September 13, 2012 BLIGHTSTAT presentation.

Click on the chart above or visit the link below to view the Greater New Orleans Data Center’ report on the progress of the BLIGHT fight in New Orleans:

photos and article by Charlie London 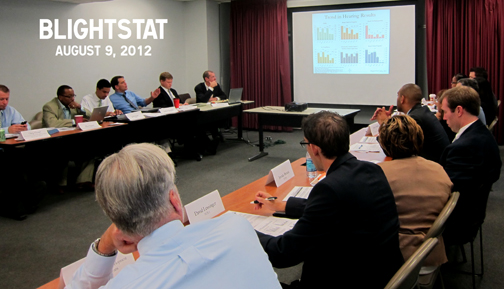 Mr. Oliver Wise, Director of the Office of Performance and Accountability, began the meeting with introductions and announcements. No meeting last month due to the implementation of the new city computer system known as LAMA(Land Management). Cameras from MSNBC were rolling. This was the 36th meeting to which the public was invited. 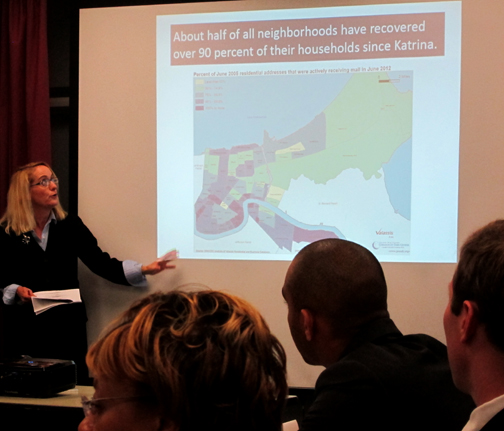 Dr. Plyer indicated the New Orleans metro economy has weathered the recession relatively well. As jobs increase so will the number of people returning to the city. Among all metro area parishes, Orleans experienced the largest gain in households receiving mail over the last year.

Fully 66 out of 72 New Orleans neighborhoods gained active residential addresses since 2010. About half of all neighborhoods have recovered over 90 percent of their households since the Federal Flood. The gain of more than 12,300 active residential addresses receiving mail since 2010 may indicate that a large number of homes have been renovated and re-occupied over the last 2 years.

Mr. Kopplin and Mr. Hebert focused on the city’s efforts at removing large apartment complexes. Mr. Kopplin said the city’s legal team is working to get blighted strip malls removed or rehabilitated so that services can be provided to the returning populace.


125 users were trained on the new LAMA software. The input from these users was used to tweak the software to make it even more user friendly.

Website content will be revamped. Permits and code enforcement cases will be easier to find. City departments are being interconnected. Website content is the main focus with an emphasis on easy to find comprehensive information.

The return on investment will be recouped within 3 years. Accela cost the city $300,000 per year. The LAMA system will cost about $70,000 per year and will be more efficient which will produce even more cost savings over time.

Ms. Pura Bascos sang the praises of the new system because it helps Code Enforcement find addresses for properties that do not have an address.

The LAMA system will go “live” on the public website sometime in September, 2012.

Mr. Allen Square indicated that the 311 system will eventually be integrated into the LAMA system.

The assessor is also being integrated into the LAMA system.

The LAMA number given at the time of a 311 call will be used by all departments accessing the system. So, a citizen that calls 311 can follow the process with the same number all the way up to the blight eradication hearing.

http://data.nola.gov will have a plethora of information available to the public starting in September, 2012.

Ms. Pura Bascos continued the meeting with a discussion of inspections. Inspections this period were not up the the usual high number. Vacations and computer system training slowed productivity somewhat. Fewer hearings were scheduled due to the implementation of the LAMA system.

Ms. Bascos introduced John Hagan who will be concentrating on title abstracts.

Mr. Carrere indicated that demolitions exceeded targeted expectations for this reporting period. He said the contractors are running out of buildings to demolish due to the entire process slowing down due to the implementation of the city’s new LAMA computer system.

There were 21 FEMA demolitions which consisted of 40 units. There are approximately 50 demolitions to go consisting of 160 units. The city has requested thousands more properties to be demolished by FEMA. Due to the many disasters that have happened recently around the country, the amount of money available is dwindling.

Mr. Hebert indicated the city is now paying 25 dollars per lot for routine grass cutting and 175 dollars for lots that have extremely high grass.

Mr. Granderson indicated that the backlog has been eliminated. Fifty-three files were accepted for foreclosure proceedings during this reporting period.

There was some group discussion over the time it takes to get properties adjudicated. The process can take up to 90 days. Demolitions and writs are the slow end of the system.

Mr. Kopplin suggested sending a letter immediately after properties are adjudicated that the city can and will demolish and/or take the property away from owners who refuse to comply.

Noraworks.org has properties for sale online. Citizens can indicate interest on specific properties. This is for serious inquiries only.

Mr. Brian Lawlor of the Office of Community Development indicated that they are working aggressively with non-profits to hold them accountable for the properties given to them.

Mr. Lawlor indicated the Soft Second Program is really making a difference. This program gets first-time home buyers out of rentals and into their own homes. Once applicants have been certified through the lender the process moves along swiftly.

Questions were taken from the audience.
Thirteen inspectors are currently working in zones throughout the city. Code for America is working on a program that will show what city action has been performed on any property on a given street.

Mr. Wise said hearings, historically, have taken a while because hearing managers had poor information. The new LAMA computer system is supposed to alleviate a lot of that problem.

A new lawyer has been hired to look at Chapter 26 and 28 as well as occupied blighted properties.

American Factfinder is the website for the U.S. Census.

Click here for a PDF of the city’s presentation at the August 9, 2012 BLIGHTSTAT meeting.

The next BlightStat meeting will take place Thursday, September 13th at 8 a.m. in the Homeland Security meeting room on the 8th floor of City Hall.