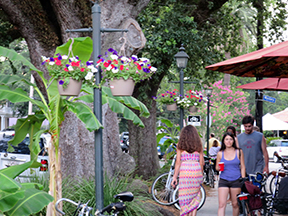 As always, when you walk up to Lola’s you find the podium out front supplied with a waiting list, a communal can of bug spray and a sheaf of plastic wine cups to accommodate pre-dinner drinks.

Inside the Faubourg St. John restaurant, flames leap high from the open kitchen as stock hits hot iron paella pans and waitresses make the rounds with wire baskets of hot pistolettes, assuring guests that, despite all appearances, the garlic-lemon-olive oil spread called alioli contains no butter.

The same collection of folksy sign art covers the walls and, at some point in the evening, the same Buena Vista Social Club album will most likely play above the din of the dining room.

It could still be the mid-1990s in here, when Lola’s first hit its stride. More importantly, it could also be 2011, just before cancer took restaurant founder Angel Miranda at age 57.

His family vowed to keep the restaurant running on the same template Miranda had set, the one that gave so many New Orleanians their first taste of traditional Spanish cooking and endeared the place as a neighborhood institution.

Today all the touchstones of Lola’s remain. But at the same time, its crew has begun to stretch out, adding specials that often combine Spanish flavors with local seasonal flavors.

At a neighborhood restaurant where regulars often know what they’ll order before they even arrive, it means there’s a new round of choices to consider.

Most recently, that took the form of bacalao croquettes ($7), which tasted like spoonfuls of chowder turned into sauce and then fried, and arugula and kale salad ($8), which was raw, rippling-fresh and done up with pickled beets, radishes and strips of oily, tender smoked salmon.

One night over the summer, Lola’s served soft shell crab ($21) with a thick, garlicky salsa verde that seemed to carry every herb in the kitchen over the crab’s dark-brown crust.

As the weather began to cool this month, the specials board brought short ribs ($21), cut across the bone and stacked high with carrots and onions cooked down soft and sweet and dashes of paprika and dense chorizo adding unmistakable Iberian flavor.

The ribs had a side of hummus, which chef Lindsay McLellan explained was a tribute to Miranda’s hometown of Seville, where Middle Eastern influences remain strong from its Moorish era.

McLellan has been cooking at Lola’s since 2005, and now she, long-time manager Courtney Enderle and Miranda’s son Juan run the restaurant together. They are pulling off an impressive charge by preserving a restaurant experience people may remember from first dates and impromptu dinner outings a decade or more ago while edging the place forward just enough to keep the rust off.

Still, it’s impossible to discount the old favorites on Lola’s menu. For me that starts with the crabmeat tropical ($9), a split avocado mounded with crab; green mussels ($7), chilled and dressed with a zingy vinaigrette; and garlic shrimp ($9), served in a clay cazuela pot sloshing with oil and throbbing with red chili peppers.

For seafood, I’m ordering the grilled ruby red rainbow trout ($18), the same fish they’ve been serving approximately forever. On a cold night (barring a short ribs special) I might get the caldereta ($18), a lamb stew with a full, highly seasoned but not quite spicy depth of flavor.

Some people just can’t look past the paella, and Lola’s turns out a credible example ($13-$52 for various sizes). But I prefer the fideua (same prices), which replicates paella with vermicelli standing in for the rice.

This is not some thin pasta dish, but rather a casserole of commingled flavors with the bonus of darkly crusted noodles all around the base of the pan. Ask for yours well-done to ensure a good crisp cap on top.

Like paella, fideua requires about 30 minutes to prepare. Do not let this dissuade you. While your dish cooks, work through tapas (the familiar ones, or a new dish), get more of the alioli, split a bottle of wine and take a long look around the room. Lola’s is a restaurant that holds a lot of memories, and it’s on track to make many more.