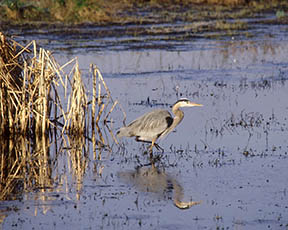 WITHOUT WETLANDS, THERE IS NO PORT

NEW ORLEANS, LA – It is timely that President Barack Obama is  visiting the Port of New Orleans this week. If current trends continue, it won’t be long before there is no port here to visit.

Putting it like that may sound alarmist. But make no mistake. Either we can have a port or we can allow coastal erosion to continue at its current rate. We can not have both.

No doubt, you’ve heard the statistics. The U.S. Geological Survey reports that Louisiana has lost enough coastal land over the past 80 years to cover the state of Delaware. According to fixthecoast.org, Louisiana is losing 25 to 35 square miles of wetlands per year. At the current rate of loss, we will lose  an area of land roughly equivalent to the size of Rhode Island between now and 2050.

In reality, we don’t have until 2050. The wetlands we are losing are our crucial, first line of defense against hurricanes. In normal times, as storms pass through the wetlands they get weaker so by the time they hit the inland population centers they are less of a threat. Coastal erosion means stronger storms, more destructive and deadly storm surge flooding, and the eventual destruction of towns, villages and cities.

The federal government has invested a lot of money in improving our levees and flood walls since the federal levees failed in  2005, flooding metro New Orleans and southeast Louisiana. You might think we could place our faith in technology. We used to do that. We realize now that, even our new bigger, better levees only withstand so much pressure.

Stronger storms weaken them more quickly. A series of strong storms will bring us back to those frightening hours during Hurricane Katrina when our federal levees were weakened to the point of failure.

President Obama is here to talk about expanding the national economy by increasing exports through the port of New Orleans. We ship more than $25 billion worth of goods through the port every year. That shipping is crucial to farming and manufacturing jobs in places as far from here as Minnesota and Ohio.

You may recall that the Port of New Orleans sustained at least $100 million in damage after Katrina, and, according to the port’s president, Gary LaGrange, port-dependent businesses had roughly triple that amount of damage and portions of the port were virtually wiped out by flooding.

The President is here to talk about exports, but imports through the port of New Orleans are a crucial part of the daily life of most Americans. Commenting in 2005 on the temporary shutdown of the port after Hurricane Katrina, Mark M. Zandi, chief executive of the research firm Economy.com, told the Washington Post, “The longer they (lower Mississippi River ports) remained closed, the greater the risk that we’d all be paying higher prices for coffee, cocoa, lumber, steel, zinc, aluminum and any number of other things.”

The President’s presence here is testimony to the importance of our port. But unless the people of Louisiana can hold accountable the parties responsible for destroying our wetlands, and get these parties to pay to fix what they damaged, future presidents will have no port to visit.

Experts estimate canal dredging by the oil and gas industry has caused at least 40 percent of coastal land loss, and  that it will take as much as $100 billion to stem the tide of coastal erosion and repair the damage that has already been done to the coast from all the causes of coastal erosion. The fact that the President has  come to visit the port gives us hope that the President understands how important and urgent it is to hold industry accountable to restore the  wetlands it has damaged and save the Port of New Orleans and all of coastal Louisiana from dissolving into the sea.