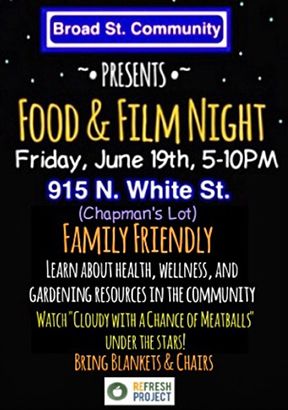 WHAT: ReFresh Food and Film Night, with food and farm demonstrations and Cloudy With a Chance of Meatballs shown under the stars!

From 5-8, there will be demonstrations (including making popcorn!) and a walk over to the community garden on St. Philip Street.  The movie will start at 8/sundown. 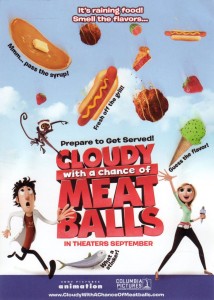 Lisa Amoss says, “Broad Community Connections and it’s ReFresh community group will be sponsoring a family movie night this Friday (June 19th) in the open lot at 915 N. White, between Dumaine and St. Philip. The movie will be “Cloudy with a Chance of Meatballs.”

The lot will be open at 5:00. Between 6:00 and sundown there will be food and gardening demonstrations and kids activities. The movie will start at sundown. Bring chairs, blankets and picnics. Hope to see you there.” 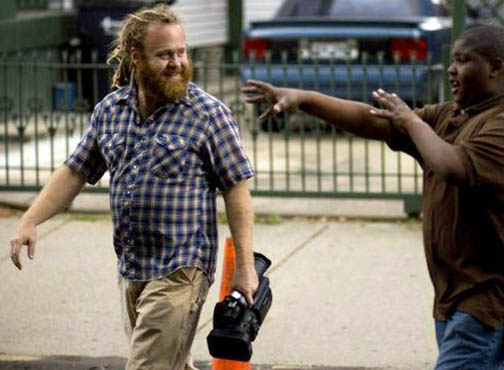 Faubourg St. John regular, John Richie carrying a camera as he works on the documentary, “Shell Shocked”. Click on his photo to view the trailer.

Obviously the issues of gun violence & race are in the forefront of the national news right now. Whatever your beliefs, opinions, or political views, John believes that the best way to move forward is to begin a dialog. Shell Shocked attempts to do that by taking an honest & comprehensive look at this very urgent & complicated problem.

The trailer (short clip) of the entire movie is below but John Richie asks you to please take one hour of your time to watch the entire documentary. ($4.99 to download) Take away from it whatever you will, but hopefully it will contribute to the attainable, positive solution that everyone wants: a more peaceful society.

New Orleans, Louisiana is the murder capital of the United States. For the last decade, statistics have shown murder rates four to six times higher than the national average. Eighty percent of the victims are black males, mostly in their teenage years. This is the city’s greatest neglected crisis with profound implications for the issues of violence and crime most American cities face. New Orleans government, law enforcement, community leaders, and well-intentioned citizens cannot agree on a prognosis or a solution to this situation. Wherever a disagreement is escalating into violence, an execution is being planned, or a victim is taking his last breath, it is more than likely a youth is witnessing or carrying out these actions.

Shell Shocked attempts to bridge the gap of this disconnect by hearing the ideas, opinions, and testimonies from activists, community leaders, police, city officials, youth program directors, family and friends of victims, and the children who live in these violent circumstances. John Richie and his friends are looking for positive solutions to an extremely negative situation.

Let me tell you a little about myself. My name is John Richie. I am a local filmmaker who made a documentary called “Shell Shocked.” The film is about youth, violence and environment. The original idea was to start a documentary program and let kids show what was really going on in their neighborhoods. This idea came from my own shame of living here for eight years and not realizing that the sometimes murder capital of the United States equates to not being able to find one black child from here who has not been personally touched, and often witness to, a homicide.

I didn’t know what was more shocking, the enormity of how murder has affected our young or my blindness to it. Like Mayor Mitch Landrieu has said, “This is our society’s biggest problem. The situation is unnatural, and what we are fighting for is the heart and soul of the city.”

I had one young man who was 17 at the time tell me that he no longer made friends with people. He would walk around his neighborhood listening to music or stay in his room. Keith had lost his younger brother to gun violence when his brother was only 13 years old. He told me that the friends could quickly lead to trouble and that his mom had already lost one child and he did not want her to go through any more grief. There is a problem when a 17-year-old feels that making friends is a life liability.

Originally, the idea of “Shell Shocked” was to just expose people to the environment that leads a small amount of our young into dangerous behavior and has the rest numbed to death, but still worried about the possibility of something happening to them or their friends.

People would ask, “Well, what about the solutions?”

And I would say, “Oh, I’m not even going to pretend to know.” I thought it was overwhelming and too many decades in the making to really have a solution, but with our film program and observing other youth mentoring programs, I began to see some answers.

Mentoring programs work. They give youth who do not have anything to do somewhere to go and ensure that they are focusing their energies into something positive. I am not saying that all youth who partake in mentoring programs would be doing crime if they didn’t attend some kind of program, but without these programs and varying family situations, we are leaving it up to them to navigate their way through a dangerous environment. Always expecting them to make the right decisions in the face of peer pressure, economic pressures, and in many cases unhealthy self-perceptions. Who out of any of us did not make some crazy, bad decisions as teenagers?

So, I offer you this, if you are worried about violent crime, if you are pondering whether or not this is the city you can raise your family in. Before you throw in the towel, volunteer a few hours every week at your nearest youth program or hire on a young man in need of a job at your business. If you don’t have the time, then donate a tax-deductible donation to a local youth program.

This is what is desperately needed. The programs working with our youth in this capacity are underfunded and often under staffed. We can do better than that.

Our youth development and recreation centers should not be an afterthought. They needed to be treated as the valuable asset they are. They make the best with what they have, which is amazing to see the influence in their client’s lives, but they cannot reach all the kids who could benefit from these services.

This is where you hear people say, “Well if I can help one kid, then I’m making a difference.” Help them say, “By being a part of this, we are making a ferocious dent into the murder rate of New Orleans by helping kids who deserve to have a good quality of life.” They are not going to solve the problem, but it is a step in the right direction.

Screening TUESDAY, May 7 of “This is Spinal Tap”. It will be held in the Bayou-Treme Center (the really cool St. Rose de Lima Church). NOLA Drive-In will be sharing this event with My House Nola.

Five bucks for movie. See you there!

Info below from Joey Lehrman:
The Bayou Treme Center, in collaboration with My House NOLA, is excited to announced a series of free food truck festivals and film screenings on the grounds of our Bayou-Treme campus. The 1st Bi-Annual Rolling Through Series will be held on the first Tuesdays of May and June in and around our beautiful church and will feature local food vendors and a film screening.

Bring your chairs and blankets, grab some food in the parking lot, and join us for the first screening in our soon-to-be-renovated performing arts venue. The details are as follows:

What: 1st Bi-Annual Rolling Through Series with food trucks and film screenings!
Where: Bayou Treme Center (2541 Bayou Road – near Broad and Esplanade)
When: First Tuesday of May and June (5/7 and 6/4) from 5-9pm
Cost: Free admission to festival with (5 dollars) suggested donation for film screening; various prices for food truck items