Tonight, you have the unique opportunity to take part in Bayou Paddlesport’s night paddle event. Enjoy a peaceful trip down the serene waters of Bayou St. John tonight from 7 to 9 pm

You can still check out the details of the night paddle on Bayou St. John in the link below:
https://a.zozi.com/#/express/bayoupaddlesportsla/products

Bayou Paddlesports was established in 2011 to provide the Greater New Orleans area with easily accessible paddling services and a great way to see New Orleans like a local. Their attention to detail and superior customer service serves locals and tourists alike.

Enjoy a little piece of sportsman’s paradise right here in New Orleans. Paddle from the launch site (on Moss Street at Florida Avenue by the LSU Dental School) up the bayou to Orleans Ave or down to Robert E Lee Blvd. Experience the city from a new perspective.

Bayou St. John is home to a wide range of flora and fauna. Maybe you’ll spot a pelican swooping down for a fish, or spy the egrets, herons, ducks, loons and more. The route sweeps through residential areas with an array of architectural styles from French Colonial to lavish modern mansions.

Total route distance is about 8 easy miles round trip, perfect for beginners and experts. Join your friends and neighbors tonight for a fun, wallet-friendly way to get your paddle on! Doing the whole trip is not necessary. Paddle at your own pace. 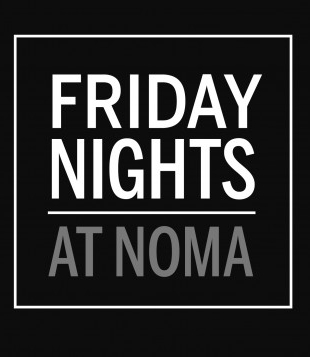 About N’Kafu Traditional African Dance Company
N’Kafu Traditional African Dance Company was founded by Mariama Curry out of the pure love and passion of African traditions. N’Kafu is dedicated to the research, historical documentation, preservation, presentation, and promotion of African folklore. Mariama has taught and performed in New Orleans area schools for over 20 years. Her company performs annually for events throughout the state.

About Slam New Orleans
Slam New Orleans is a spoken word grass root initiative whose goal is to promote spoken word and slam poetry competitions to all ages, genders and races. Founded in 2008 by a group of local poets that believed that this medium of expression could save lives, and wanted New Orleans to be represented nationally, because they were not since hurricane Katrina in 2005. Each year Slam New Orleans organizes a team of adult poets, named Team S.N.O. to go to regional and national poetry competitions to represent the New Orleans poetry scene. Since its inception, Team S.N.O. has won three national poetry slam titles, placed second at the Southern Fried Poetry Slam in 2010 and 2012, and third place at Southwest Shoot Out Poetry Slam and 3rd at the National Poetry Slam 2014.

About Grey Gundaker
Grey Gundaker is Duane A. and Virginia S. Dittman Professor of American Studies and professor of Anthropology at the College of William & Mary. She began studying and writing about African American religious and philosophical knowledge that informs designed landscapes, burial and ancestral tributes, and the arts 25 years ago, while a graduate student at Yale, where she worked with the anthropologist John Szwed and art historian Robbert Farris Thompson. Her publications include numerous articles and the books Signs of Diaspora/Diaspora of Signs: Literacies, Creolization and Vernacular Practice in African America, Keep Your Head to the Sky: Interpreting African American Home Ground, and with co-author Judith McWillie, No Space Hidden: The Spirit of African American Yard Work.

Ancestors, Remembrance, and Moral Force: Flashes of Spirit in Burial and Residential Settings
In the African Diaspora legacies of Kongo join the traditions of other peoples and American Christianity in a rich repertoire of commemorative symbols and practices that show respect for those who have transitioned recently and in the more distant past. For many African peoples rights in land were demonstrated by material signs showing ancestral connections to the landscape. When groups migrated they planted these signs in new terrain. For African Americans enslaved in the United States, it remained essential to show respect for the dead, but it was especially important to transcend the rupture of the Middle Passage by asserting rights in a new and hostile surroundings. This talk follows a transatlantic thread which links flashing and white substances with transition across water and continuing spiritual presence in the world of the living, showing how these signs move back and forth between burial and home landscapes of commemoration. 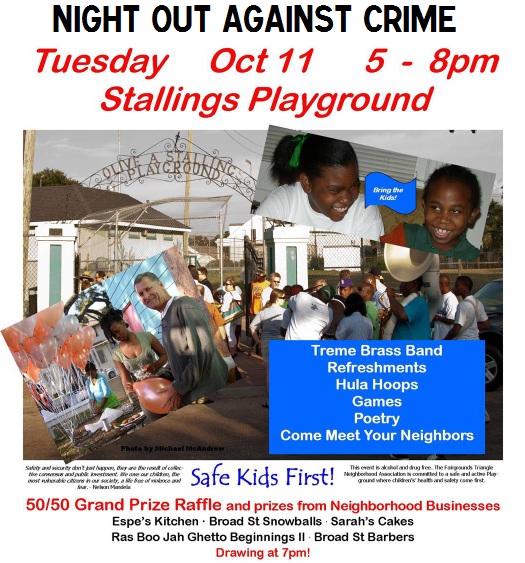 Night For a Safe Neighborhood is today, Tuesday, October 11 from 5-8pm at Stallings Playground. FTNA is selling raffle tickets to cover expenses. Volunteers are needed for setup today during the day from 12 – 4:30pm. Security has been arranged and the Fairgrounds Patrol will be patrolling the neighborhood.

Check out the poster below – it will be a wonderful event – see you there! PLEASE HELP GET THE WORD OUT TO YOUR NEIGHBORS! 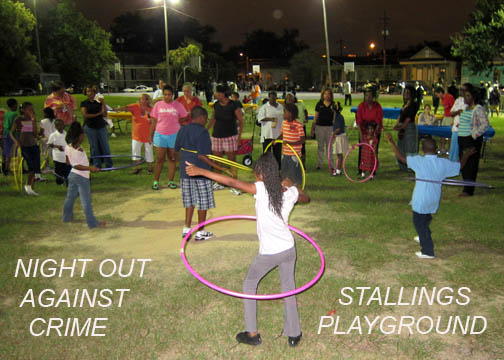 On January 19, 2008, many wonderful people from far and near came out to help renew Olive Stallings Playground. Many of the people who worked on this project were from the surrounding neighborhood but some were from as far as Minnesota, New Jersey, and California! 200 people came out in the rain and cold weather to make this happen.