Faubourg St. John neighbor Sarah Hess wrote that she and her children were able to work with Patrick (an artist from Houston) on the Funnel Tunnel located on Poydras by the Claiborne overpass.

Sarah says you too can enjoy the opportunity to take part in a public art project by showing up at 10 a.m. on Poydras by the Claiborne overpass. More lath is needed to complete the project and, with your help, the project will be completed today.

Where: On Poydras at the Claiborne overpass.

Who: You and all your friends!

Sculpture for New Orleans applied with the city’s Design Advisory Committee earlier this month to install a rather large and unique sculpture called “Funnel Tunnel”. The sculpture is approximately 180 feet long and is composed of lots of reclaimed parts.

“Sculpture for New Orleans” is an on-going sculpture exhibition placing monumental sculptures throughout New Orleans, from the well-traveled areas of Downtown, Uptown and the Garden District to City Park and the New Orleans Museum of Art. The Central Business District will be the starting point of the exhibition with James Surls’ monumental bronze and stainless steel sculpture, “Me, Knife, Diamond and Flower” in front of the Ogden Museum of Southern Art.

The concept of the project is to bring national and international attention to the visual arts and the artists of post-Katrina New Orleans. With the support of an international field of artists, the sculpture exhibition will give local artists a chance to assist and install artwork, as well as the opportunity to network with the visiting artists. In addition, the show will give the local artists a much-needed support structure. Plans are in place for artists to lecture at local universities, including University of New Orleans, Tulane and Xavier. 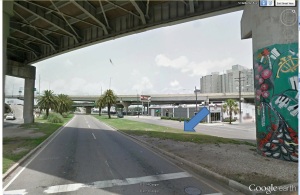 Funnel Tunnel will be located on the block of Poydras directly north of Claiborne. Here’s a street view of the particular block now: