Have you seen those Discount Tree Cutting signs? Those plywood signs that are 4 feet by 4 feet in size posted about 15-20 feet high on utility poles throughout the city? These signs have been diligently removed by citizens but this sign bandit continues to post them throughout the city despite warnings from officials. Many of the signs get put right back up where they were taken down. 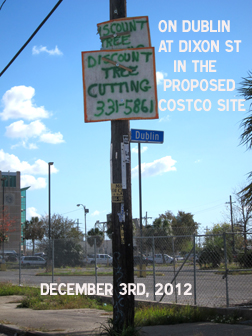 The signs you see below and those signs you see stuck in the ground on city property and posted on utility poles throughout New Orleans are illegal and unnecessary. There are unused billboards throughout the city that could be used for advertising.

Read more about bandit signs in the link below:
https://fsjna.org/2011/08/city-to-bust-sign-bandits/

Many thanks to Ann MacDonald and the workers at Parks and Parkways who immediately took action on
some of the signs posted here Nov. 30th.

The complaint went out last Friday and 4 of the signs disappeared right away. There are still several of this sign bandit’s work around (see below) but Parks and Parkways is to be commended for their quick action.

Hopefully, the rest of these large signs will be removed soon!

Are you tired of this nonsense? Then click on the link below and contact your city councilpeople. This bandit crosses council district lines.
http://nolacitycouncil.com/meet/meet.asp

In an exclusive interview Charlie’s Neighborhood News has learned from a trusted source that the City of New Orleans will be giving Sign Bandits until September 12th to get their act together.

On September 12th the City of New Orleans will begin aggressively fining those who insist on placing signs on public property. To learn more about bandit signs and how you can help fight blight, please visit the link below:
https://fsjna.org/links/steps-to-stomp-out-blight/

In the video above Councilmember Stacy Head revisits the law against bandit signs making it clearer but also giving larger leeway to realtors and politicians letting politicians have signs up 48 hours before and 48 hours after the election.

below from Marty Stephens:
In New Orleans, City Cracking Down on Bandit Signs
Hallelujah! The City of New Orleans is now taking an active role in removing bandit signs and fining violators.

At a City Council meeting June 2, Mike Sherman, Mayor Landrieu’s director of intergovernmental affairs, listed several new developments:
•The Department of Parks & Parkways has removed 9,500 signs since January.
•Two frequent violators were prosecuted in Municipal Court.
•An employee from the Department of Sanitation is now dedicated to sign removal.
•Citizens can call (504) 658-4015 to report bandit signs.
•Violators now receive a phone call and letter advising them to remove their signs, after which they risk fines.

You can watch Sherman’s presentation here, around the 16-minute mark.

At the same meeting, Councilmember Stacy Head introduced an amendment to the City Code simplifying and clarifying the law on bandit signs. The Departments of Sanitation and Parks and Parkways are now authorized to invoice individuals and entities responsible for bandit signs $10 per sign. The revised ordinance also provides for an administrative appeal process. If an administrative appeal is denied, additional fines and community service may also apply.

Here’s a story on the amendment from WGNO, which includes the updated version of the bandit sign law:
New Orleans Councilwoman Cracks Down on Illegal Signs
http://www.abc26.com/news/local/wgno-bandit-signs-and-blight-new-orleans-councilwoman-cracks-down-on-illegal-signs-20110607,0,2572233.story

I’m heartened by these developments and hope the city continues with these initiatives. Although there are still plenty of signs out there, the roads are definitely looking better these days.

from Marty Stephens
Click HERE to see his original article.

AN ORDINANCE to amend and reordain Article III of Chapter 134 of the Code of the City of New Orleans, relative to unauthorized signage placed on the public right-of-way, the administration thereof, and penalties therefor; and to provide otherwise with respect thereto.

be and the same is hereby amended and reordained to read as follows:

(a) written consent is granted by the City. This subsection does not apply to public property leased for private business purposes, or to coin-operated devices used to display newspapers, so long as they do not impede vehicular or pedestrian traffic or damage public property.

(b) Any unlawful sign found within a public right-of-way shall be immediately seized and removal thereof by anyone is hereby authorized. It shall be the responsibility of the Department of Sanitation or the Department of Parks and Parkways to devise a system of removal for such signs.

Temporary political signs when not prohibited by any other provision of law may be placed on the public right-of-way for 48 hours prior to an election and remain for 48 hours after the closing of the polls for an election.

No sign shall be constructed which resembles any official marker erected by the City, state or any governmental agency or which by reason of position, shape or color would conflict with the proper functioning of any traffic sign, signal, or switch, or which, by its shape or color would conflict with or be confused with emergency vehicle lights, especially blinking lights. Use of words such as “stop,” “look,”
“danger,” or any other word, phrase, symbol or character in such a manner as to interfere with, mislead, or confuse traffic is prohibited.

No permit for a sign extending beyond private property onto a public street, public sidewalk, or public alley shall constitute a permanent servitude or easement, and every such permit shall be revocable at any time by action of the City, and the City shall not be liable for any damages to the owner by reason of such revocation. Every permit shall so state expressly on its face; and the applicant for any permit shall so expressly agree in writing.

Signs may not be located or illuminated in such a manner as to obscure or otherwise interfere with the effectiveness of an official traffic sign, signal, or device, or so as to obstruct or interfere with the view of a driver of approaching, merging, or intersecting traffic, or so as to prevent any traveler on any street from obtaining a clear view of approaching vehicles for a distance of 250 feet along the street.

Signs containing lights which are not effectively shielded as to prevent beams or rays of light from
being directed at any portion of the traveled roadways from which the sign is primarily viewed and which are of such intensity or brilliance as to cause glare or to impair the vision of the driver of any motor vehicle, or which otherwise interfere with any driver’s operation of a motion vehicle are prohibited.

The Director of the Department of Public Works shall, whenever any sign or awning in his/her opinion obstructs the view of any street, in any manner, shall give not more than five days notice to its proprietor for removal, or for the reduction of the size of the sign or awning. If the proprietor fails to comply with
the provisions of this section during said notice period, the owner shall be liable to a fine of not less than $10.00 per day for contravention of this section, recoverable for the use of the City.

(a) It shall be unlawful for any person or entity to post or paint advertisements of any kind on any street, sidewalk, public buildings, utility poles, light standards, street signs, parking meters, trees located in public right-of-way or traffic signal standards.

(a) public rights-of-way or traffic signal standard shall be seized and removed.

(c) It shall be unlawful to distribute or cause to be distributed any commercial product samples, commercial advertising brochures, leaflets pamphlets or commercial literature of any time on the streets and sidewalks of the City, except as otherwise provided in this Code.

(a) The City attorney is authorized to seek an injunction to prevent additional violations of the provisions of this section.

(b) The existence of any illegal sign on the public right-of-way constitutes prima facie evidence that any individual or entity depicted or advertised on an illegal sign caused, authorized, allowed, or is allowing the placement or posting of the sign on public property and is in violation of this section.

Any individual or entity depicted or advertised on an illegal sign that receives an invoice from the
(a) Department of Sanitation or the Department of Parks and Parkways may provide written correspondence to the department from which an invoice was received within ten (10) days of receipt, and request an administrative appeal of said assessment. If guilt is determined at said appeal, the following additional administrative costs and penalties may apply:

b. The total monetary fines imposed per case shall not exceed $500.00