Hurricane Isaac is on its way towards the Mississippi River Delta and expected to make landfall tonight as a strong Category 1 hurricane, pushing toward a 7 p.m. landfall. The storm will continue to slowly head for New Orleans at 10 mph, packing 75 mph winds. The bulk of rain is expected to come late Tuesday and Wednesday. 12-16 inches of rain is expected in total, which will result in street flooding. Mayor Landrieu and Governor Jindal have both declared a state of emergency and have mobilized city and state agencies to prepare for a significant storm and be ready to respond quickly in case of emergencies. All Orleans Parish Public, RSD and Catholic elementary & high schools have announced that they will be closed through Thursday.

Wind speed is estimated to reach a maximum of 80 MPH 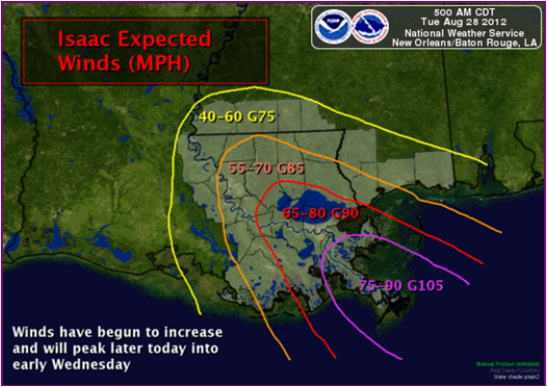 For your own safety, the City of New Orleans has announced that you will be ticketed if you are driving faster than 5 miles per hour on flooded streets in New Orleans. If the car exceeds 5 miles an hour, the driver might lose control of the vehicle. There’s also a possibility that the waves the car creates will seep into other residents’ cars, homes or businesses, possibly causing costly damages. A citation for violating the ordinance will cost no less than $200 in fines plus court fees. The City is also allowing residents to park their cars on the neutral ground for the duration of the storm to prevent flooding.

I encourage you to stay indoors during this storm. No one should venture out on foot or in their cars unless it is an absolute emergency. Lakeshore Drive and the West End area in New Orleans were rendered inaccessible to cars late Monday night, when the Orleans Levee District closed five floodgates in that area. The city has also banned parking of vehicles on the Industrial Canal levee after 10 a.m., and said violators would have their cars towed. RTA bus service will continue until winds reach 25 mph.
The City’s 311 service is operating 24/7 for general information and to report non-life threatening emergencies such as: sidewalk and road problems, fallen debris, and street light outages. The sanitation department reminds all residents to secure their trashcans to prevent damage to their homes.

Residents should call 911 ONLY for life-threatening emergencies.
The Health Department transported patients with special needs to shelters in Baton Rouge if they wished to leave. If residents have mental health needs or issues please call 1-800-424-4399, staff will be available to assist throughout the storm.

All 24 Sewerage & Water Board pumps are 100% operational, and backup generators at the Sewerage & Water Board Plant are active. The pumps can drain 1 inch every one hour and then 1/2 inch every hour thereafter. These pumps and pump operators will be active and working through the whole storm. With the amount of rain expected there is a high potential for widespread flooding. Motorists can also obtain information regarding road closures by contacting DOTD’s Customer Service Center at dotdcs@la.gov, 1-877-4LA-DOTD (1-877-452-3683) or (225) 379-1232. Business hours are 7:30 a.m. – 5 p.m., Monday through Friday.

The Louisiana Department of Insurance has activated their call center hotline in anticipation of Hurricane Isaac. All insurance questions can be directed to 1 800.259.5300. Also you can also submit questions by e-mail at Isaac@ldi.la.gov.

Entergy has activated its emergency response center. Customers are encouraged to go to www.entergy.com to sign up for text messages. Residents should call 1-800-9OUTAGE to report outages or downed power lines.

Louisiana price gouging laws are in effect from August 26, 2012 through Tuesday, September 25, 2012, following the state of emergency declaration from Governor Bobby Jindal. Price gouging occurs when a seller prices merchandise much higher than is reasonable or fair. The price gouging statute prohibits the raising of prices above the pre-emergency levels unless there is a national or regional market commodity shortage. If you suspect price gouging, please contact the Louisiana Attorney General’s Office at 800-351-4889.
Prepare to shelter in place with supplies needed in the event of loss of water and/ or power. READY.NOLA.GOV has extensive information on how to shelter in place. Citizens are encouraged to sign up for email and text message alerts by going to http://new.nola.gov/ready. This service allows city officials to contact citizens during emergencies, which includes life-threatening weather events, evacuation or shelter in place information, and other pertinent emergency information. In addition to the website, the City operates a twitter handle: @nolaready.

• To report a non-life threatening problem or to get information, call 311

We have invested $14.5 billion to upgrade and rebuild our flood protection systems in New Orleans. Check out the graphic below from the Times-Picayune. 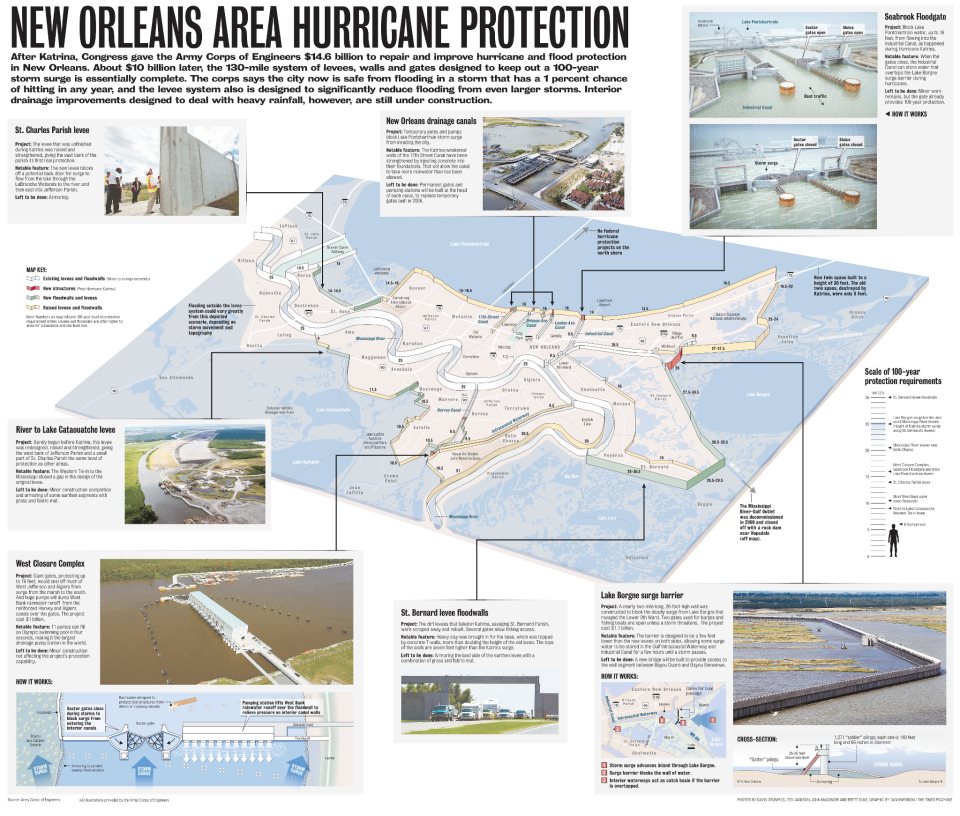