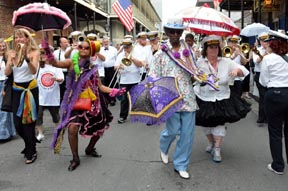 Jackie Clarkson, New Orleans City Council President, will address music campers from around the world who are attending the New Orleans Traditional Jazz Camp for Adults. She will speak at the Camper Concert at 7pm on Friday June 15th at the Grand Ballroom of the Bourbon Orleans Hotel. This concert will feature campers performing in bands who have spent a week in the city taking music instruction from some of our finest musicians. 104 campers from all over the United States as well as Finland, Germany, Argentina, The Netherlands, UK and Canada are attending. This concert is free and open to the public. 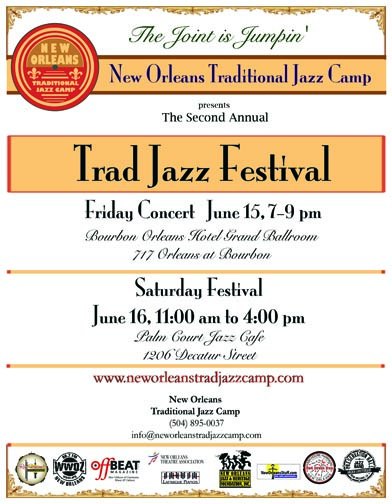 This concert will also feature 12 local music students who are attending through donations to our scholarship program. This will be the third yearly camp founded by local musicians Banu Gibson, Leslie Cooper and Nita Hemeter. The mission of the New Orleans Traditional Jazz Camp is to promote, preserve and perpetuate the music that was born in New Orleans – the Birthplace of Jazz.

The third annual New Orleans Traditional Jazz Camp for Adults will kick off Sunday June 10th at the Bourbon Orleans Hotel in the French Quarter. Campers are attending this uniquely “Only in New Orleans” music camp from 28 states as well as Canada, UK, Argentina, Finland, Scotland, Germany and the Netherlands. The mission of the camp is to promote, perpetuate and preserve the music that was born in the Birthplace of Jazz. The camp was founded in 2009 by Banu Gibson, Leslie Cooper and Nita Hemeter who are all musicians in New Orleans.

This year scholarships have been awarded to 12 local student musicians to attend free of charge.

The weekly activities also include presentations by Jazz Historians at morning breakfast, a performance at Preservation Hall, a huge “Second Line” Parade on Tuesday June 12th starting at 6:30pm through the streets of the French Quarter, a performance of faculty and world renowned clarinetist Dan Levinson at Sung Harbor on Thursday June 14th, a Friday night June 15th concert held at the Grand Ballroom of the Bourbon Orleans Hotel from 7pm until which is free and open to the public and a Traditional Jazz Festival on Saturday June 16th from 11am-4pm at the Palm Court Jazz Café that is also open to the pubic.

For more information about this program see our website at www.neworleanstradjazzcamp.com The demand for our camp is so great that we have a waiting list available for sign up for next year’s camp.

June 10th – Sunday evening – Meet and Greet at the hotel.