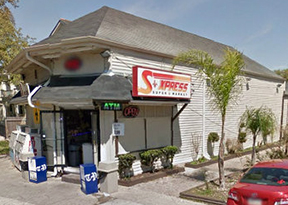 Two men headed to Soprano's Meat Market early Thursday morning to get some money out. But instead of using their card, they took the whole ATM. Video obtained by police shows a white truck back up to the store. The pair break into the store, located in the 2700 block of Ursulines Avenue, by attaching a chain from their truck to the front door.

One man then attaches a chain from the truck to the ATM, which is just inside the door. The other man then drives the truck forward, and the ATM comes out of the wall.

The man then throws the ATM in the back of the truck and the truck drives off.

Police are looking for the two suspects, one of which was wearing a "boonie" style hat, according to police. The other man was waring a blue hooded sweatshirt.

Hopefully this doesn't end up like that Breaking Bad episode.

Citizens with information that can help solve this crime are asked to call CRIMESTOPPERS at 822-1111 or toll-free 1-877-903-STOP.  You could receive a cash reward of up to $1,000 for the information leading to the arrest and indictment of the responsible person(s).

Detectives are asking for the public’s assistance in identifying and locating possibly two or more unknown males wanted in connection with a Business Burglary. The incident occurred early this morning at Soprano’s Grocery Store in the 2700 block of Ursulines Avenue.

In surveillance video obtained by detectives, a truck is seen pulling into the parking lot and backing up to the front of the business. A chain attached to the truck is used to pull the front door open at which time the suspect enters the business and wraps the chain around the ATM. The truck pulls the ATM out of the store where the subject and driver are seen placing the ATM into the back of the truck. The subjects subsequently fled the scene.

One subject is described as a Caucasian male wearing a ‘boonie” style hat, a scarf and a black leather jacket.

The driver is described as a Caucasian male, wearing a blue hooded sweatshirt and black jeans with designs on the rear pockets.

The truck is described as having black rims, dark tinted windows and individual nerf bars below each door.

Citizens with information that can help solve this crime are asked to call CRIMESTOPPERS at 822-1111 or toll-free 1-877-903-STOP. You could receive a cash reward of up to $1,000 for the information leading to the arrest and indictment of the responsible person(s). You do not have to give your name nor testify to receive the reward. Citizens can also submit an anonymous tip online to Crimestoppers at www.crimestoppersgno.org

Any person who, after the commission of a felony, shall harbor, conceal, or aid the offender, knowing or having reasonable ground to believe that he has committed the felony, and with the intent that he may avoid or escape from arrest, trial, conviction, or punishment shall be charged with R.S. 14:25; Relative to Accessories After the Fact.

An accessory after the fact may be tried and punished, notwithstanding the fact that the principal felon may not have been arrested, tried, convicted, or amenable to justice.

Whoever becomes an accessory after the fact shall be fined not more than five hundred dollars, or imprisoned, with or without hard labor, for not more than five years, or both; provided that in no case shall his punishment be greater than one-half of the maximum provided by law for a principal offender.

The New Orleans Police Department, under the leadership of Superintendent Ronal W. Serpas, is engaged in a complete transformation in its approach to ensuring that New Orleans is a safer place to live, work and visit. The police force, which currently employs dedicated men and women, is committed to transparency, accountability, collaboration and integrity.